It's hard to pinpoint the exact peak of Jack Charlton's reign. Ireland's performance levels were not subject to any major dips or troughs in the years between 1987 and 1994.

However, a perusal of the records indicate strongly that the peak, in so far as there was one, may have arrived earlier in Jack's reign rather than later.

For one thing, Euro 88 is the only qualification campaign in which Ireland finished at the head of the table. For Euro 2000, we were seconds away from doing likewise, at the expense of Yugoslavia this time, but then...

Between May 1987 and May 1988, Ireland played eight internationals and won all of them.

It began with a memorable 1-0 friendly win over Brazil. Next came a professional away win in Luxembourg and was followed by an unconvincing, hype-puncturing 2-1 win over the same opposition at home.

In October came one of Ireland's best competitive performances of the decade. Bulgaria were demolished 2-0 in Lansdowne Road. Liam Brady was magnificent (although he was sent off shortly before the end) and McGrath and Moran grabbed the goals.

The day before Gary Mackay wrote his name in lights in Sofia, Israel were murdered 5-0 in a friendly in Dalymount Park.

The warm-up games for Euro 88 saw more victories. Romania, Yugoslavia and Poland all came to Dublin between March and May and were beaten 2-0, 2-0 and 3-1 respectively.

The sequence was only broken by a 0-0 draw in a friendly in Oslo, the final warm-up game before Stuttgart. 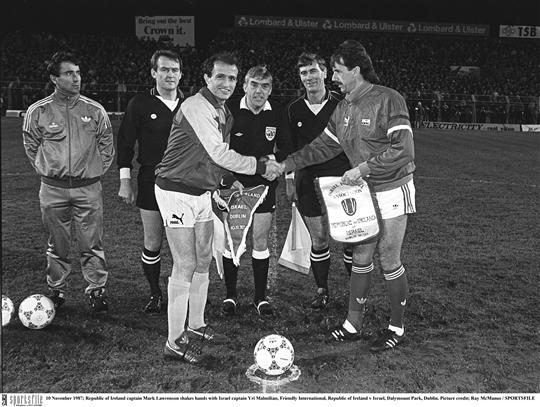 Tough to acquire footage of this one. 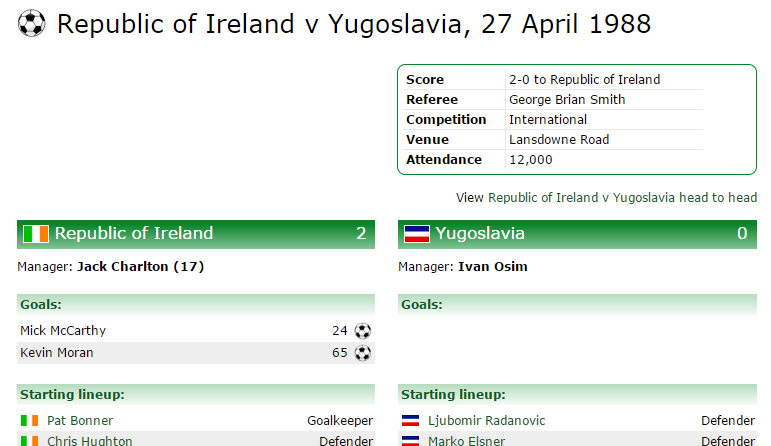 Read more: Remember The Time A Dublin Club Attempted To Get Into The Scottish League?

Football
3 months ago
By Eoin Harrington
Neil Lennon Was Raging With Northern Ireland's Loss In Bulgaria
Football
1 year ago
By PJ Browne
Duffy Shoulders Blame But Sees Positives In Ireland Peformance
Football
2 years ago
By Michael McCarthy
England Players React To Horrible Racist Abuse In Bulgaria
Popular on Balls
Football
2 days ago
By PJ Browne
Ireland's Lee O'Connor Says It Was An 'Easy Decision' To Leave Celtic
Football
1 day ago
By Eoin Harrington
Quiz: Name Every Player To Score In A Champions League Final
Rugby
23 hours ago
By Colman Stanley
Roy Keane Made Quite An Impression On Eddie Jones And The England Rugby Team
52