What If: Damien Duff Scored THAT Chance Against France

The date was November 18th 2009, the venue was the Stade De France.

Ireland were taking on the French in a play-off for the 2010 World Cup. After a 1-0 loss in the opening leg in Dublin, it was shit or get off the pot time for Giovanni Trapattoni's side. The buildup was tense, it was a defining moment for this Irish team.

What would follow was one of the best Irish performances we have seen in the last 20 years. Ireland played some stunning football, which paid off in the form of Robbie Keane's opener in the 33rd minute.

While Irish sides of recent years have tended to retreat into their shells after scoring the opening goal, that was not the case here.

When Damien Duff was played through one-on-one by Liam Lawrence in the 61st minute, it seemed we would be on our way to South Africa. However, that would not be our fate. Bacaray Sagna would manage to get a nick on the ball, and Hugo Lloris made the save. 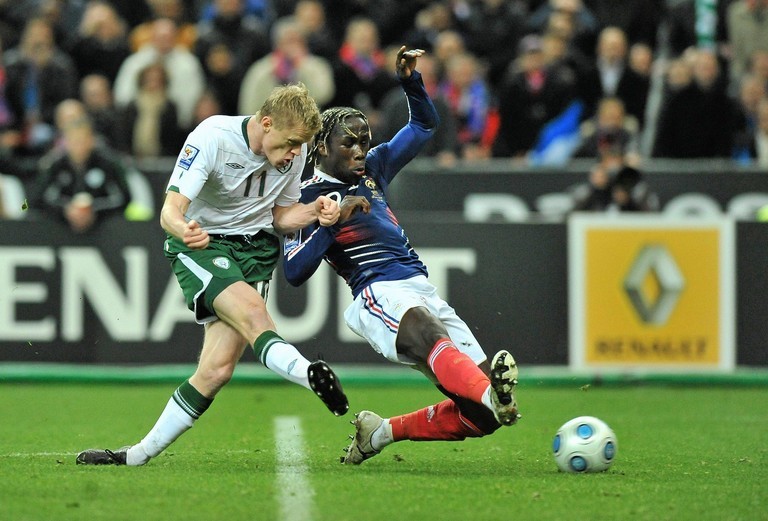 Of course, we all know what would happen later in the game.

It is a refereeing decision that has haunted us ever since. It remains perhaps the most infamous moment in Irish sporting history.

But what if Duff buried that chance in the 61st minute?

What would all this have meant for Thierry Henry, the number one public enemy in Ireland for the last 10 years? What would it have meant for that Ireland team, and for Giovanni Trapattoni? Could the 2010 World Cup have had long-term effects on Irish football?

If Duff scores that goal, a hell of a lot would have changed.

This is not only the case for Ireland, but also the French.

Thierry Henry, despite his tendency to destroy your dreams when he inevitably scored against your team, was one of the most universally admired footballers in the game up to this point. He was well-liked even by opposition fans during his time at Arsenal. When he moved to Barcelona and won the Champions League, everyone recognised that it was an accolade he deserved.

After that handball, public opinion swayed in a dramatic fashion.

While he was demonised in Ireland, that feeling also manifested itself on a global stage. Tony Cascarino said after the game:

When we reflect in years to come on the career of one of the finest strikers the game has known, we will have to put his handball against Ireland right up there with all the great goals he scored.

A decade on, this prediction has come to pass. Would Henry's legacy be different were it not for that handball? Certainly.

On France's behalf, they may have benefitted from not going to that World Cup. We looked at their calamitous tournament in detail here, but to sum it up, it was an absolute shambles. The squad went on strike to protest the decisions of their manager, while Thierry Henry's star would fall even further.

Raymond Domenech informed his captain before the tournament that he would not be part of the starting line-up in South Africa, with Nicolas Anelka taking the number nine spot. Henry was the centre of media attention for France's brief foray at the tournament, and they paid for it on the pitch.

They would take one point from their three games. It was a national crisis.

As for Henry, his international career ended with a whimper. Would he have carried on had they failed to qualify? Maybe not, but ending it that night in Paris would have been a far more dignified way to go.

The only downside of France failing to qualify is that we would have been robbed of the greatest Irish sporting photo of all time. This snap of Robbie Keane and Damien Duff celebrating their World Cup exit remains unchallenged in our eyes.

And what of Ireland, what would have changed for the Boys in Green? If Duff had put away that chance, our experience of football in this decade could have been wildly different.

We would have avoided the whole 33rd team fiasco, an embarrassing time for Irish football, and one which which we would only learn the full extent of in 2015. The FAI would ultimately receive a €5million payout from FIFA after the event, something that has widely been assumed to be some sort of hush money.

The FAI's credibility was largely shot after this saga, both in the eyes of the sport's governing body and the Irish public. Would they be held in a higher esteem had this event not occurred? Definitely not, but it would have been one less scandal to deal with.

Unfortunately for the locals, the African continent would never get to experience the joys of the green army. Ireland have developed a reputation in major tournaments over the years, and you can only imagine that craic would have been 90 in sub-saharan Africa. 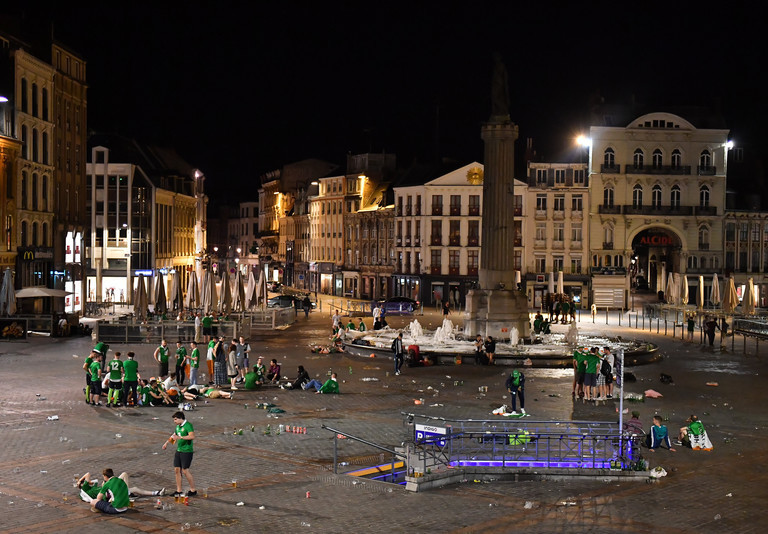 The most sickening loss of our failure to qualify is the stories of Irish supporters renting a camper-van and driving from Hollyhead to Cape Town, a 181-hour journey according to Google Maps. Not a bother on our lads.

We also likely would have added another string to the bow of great Irish sporting traditions. Like it or lump it, most of our sporting rituals have been robbed from somewhere else. The olé olé, the Poznan, both came from major tournament appearances.

What would we have taken from the 2010 World Cup? The vuvuzela of course.

If we played in that tournament you can bet your bottom dollar that you would still hear vuvuzelas at matches in Ireland. Out with the air horn, in with the vuvuzela.

We would probably hold a very different opinion of that Ireland team had they made this tournament.

Our failure to qualify for that World Cup has hung over Irish football for the last ten years. As our World Cup hiatus extends to a second decade, there is a sense that the 2010 iteration was a missed opportunity.

An unseeded side in the European pot, France were drawn in a reasonable group, alongside Uruguay, Mexico and hosts South Africa. Not the most daunting of tasks, even if the French made it appear as such.

While Uruguay were incredible in that tournament, that was a group Ireland could have progressed from. South Africa may have been riding the crest of a wave in their home tournament, but they were no world beaters. Mexico only managed a draw against the hosts, and you get the sense we could have taken them.

A date with Lionel Messi would have awaited in the first knockout round. Defeat most likely would have followed, and it would certainly have been difficult to see us overcome Germany in a quarter final. Still a decent showing at this tournament would have been a huge boost to Irish football.

With some tournament experience under their belts, would Euro 2012 have turned out differently? It is difficult to say. That was an incredibly tough group, containing the two finalists. However, one would assume that we would not have crumbled on the biggest in the manner that we ultimately did if we had another major tournament notch on our belt . 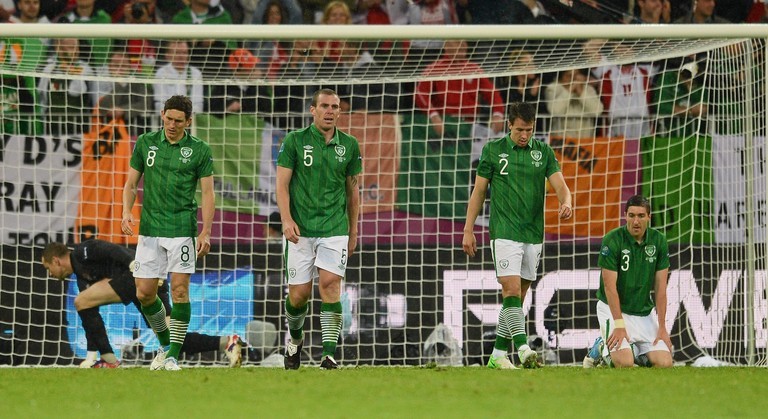 All of that would contribute to a completely different narrative surrounding the team in the proceeding years.

If Giovanni Trapattoni had led the side to two consecutive major tournaments, it is highly likely that he would have survived the disaster that was the 2014 World Cup qualifying campaign. Two more years of Trap would almost certainly have meant no Martin O'Neill, and there is no way of telling how that would have affected our chance for Euro 2016.

Considering Trapattoni's stubborn team selections, the declining players in that squad may have survived for a bit longer. That is something that likely would not have aided our qualification chances. As we saw with Martin O'Neill, sticking with a manager for too long can destroy a team.

The O'Neill-Keane era would likely never have happened, and there is no guarantee Mick McCarthy would have been available in 2016. Who would be in charge at the moment? The succession plan of Irish managers would no doubt have been altered.

As for the players, they would have joined Irish footballing royalty.

There were some incredible players in that team, but none of them are remembered most fondly for their contributions during this period. When you think of the likes of Robbie Keane and Damien Duff, the 2002 World Cup is what stands out. Another appearance on the biggest stage may well have changed that.

That team would have joined the royalty in Irish football, that of Italia 90 and those from Japan. In truth, we now forget how good of a side it was.

They drew twice with the World champions in qualifying, outplayed a France side that had a number of world class players, and generally gave everything to the Irish jersey. Now remembered as the backdrop for the Thierry Henry handball, and the disaster at Euro 2012, they are a team that has been lost to the history books.

If only Damien Duff had scored that chance, it all could have been so different.

Football
1 month ago
By Aonghus Ó Maicín
Why Are Irish Managers Disappearing From Sight?
Previous Next

fai republic of ireland what if