These are exciting times for Irish football. A thrilling victory over World Champions Germany has been followed up with two superb performances against Bosnia & Herzegovina and we're off to Euro 2016. None of this would be possible without the League of Ireland. The League may never be popular, and sometimes it's an easy target for sporting pundits and fans alike, but it has proven to be essential to the health of the Irish national team.

Martin O'Neill used 25 players in the 12 qualifiers. Of the 16 players born in the Republic of Ireland, 9 of them started their senior careers in the League of Ireland. You can add Derry-born James McClean to round that list up to 10. The League of Ireland has always produced players for the Ireland team but it tended to be one offs like Paul McGrath and Roy Keane (arguably our best two players of the last 30 years) rather than the large numbers we see now. What changed?

The biggest change owes much to the huge influx of money into the British game. In the 1980s Irish lads would fill the youth sides of top British clubs. These days, those clubs have multi-million pound scouting networks and their youth set ups are filled with the brightest talents from all over the world. There simply isn't room for the amount of Irish youngsters who previously travelled to play at the top tier clubs.

Sure, the brightest talents from Ireland will still make it through academies at clubs like Manchester United (e.g. John O'Shea and Robbie Brady from the current squad) and when you're as talented as Robbie Keane, you will have scouts tripping over themselves to sign you. These players are exceptional. Simply put you can not become a regular starter in the English Premier League unless you are ridiculously talented. We're talking about the top 1% of footballers here.  Our little nation won't produce too many of these so we have to look elsewhere.

If you're not as talented a youngster as Robbie Keane or Robbie Brady, what are your options now? You can try your luck with the second tier sides in England (or lower) but this has only worked for Hendrick, Randolph and Whelan of the current squad. The rest of them all stayed in Ireland and progressed from their schoolboy clubs to League of Ireland football.

Some only stayed for a handful of games before making the leap (Meyler, Quinn, Long) but others were established or rising stars in Ireland before they moved up the ladder (Hoolahan, Coleman, McClean). For prospective young footballers in Ireland now, the League of Ireland can act as a bridge between schoolboy football and the top professional ranks in England (or further abroad). 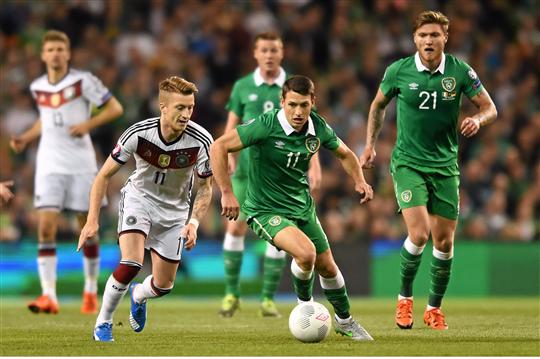 Wes Hoolahan was deemed too small to "make it". It has taken him a few years, but he's now essential to the Irish team. Would players like Daryl Murphy have had such long careers in the UK if they hadn't have received the grounding that League of Ireland football gives? When you're playing for Waterford United in the LOI First Division, you know you have to work hard. That has to stand to a professional. Some of the players tried their luck in England and returned. The LOI helped them rebuild their careers.

The most satisfying part of this for League of Ireland watchers is that it's only the start. The, now elite, leagues at Under 19 and Under 17 levels are providing youngsters with clear pathways to professional football. They're competing against the most talented footballers in the country more often and they're receiving top class coaching all the way from 15/16 to senior level. The traditional schoolboy clubs have always played their part in producing footballers for Ireland and that will still be the case now.

Now the very best talents will head to the UK and the rest will receive great coaching and play at a high level in Ireland. The FAI's insistence on all coaches having their UEFA A licence is to be commended and likewise the vigor with which LOI clubs have embraced the new set up. For the past 15 years coaching in the LOI has improved year on year. It is no surprise to see technically gifted players like Hoolahan and Coleman emerge from the league. Look at the reaction in Peterborough to a player like Chris Forrester. Another deemed too "slight" to play professionally by scouts.

The recent results have shown how crucial the LOI is to the national team. Now is the time for the FAI to embrace this and invest in the future. No longer can Irish football depend on England to produce our players. We must control our own player development and the League of Ireland, as the pinnacle of the sport in Ireland, must be made as attractive a league as possible for young, talented Irish footballers.

The current make up of the Irish squad should be how it is for the foreseeable future; a few exceptionally talented footballers trained at the top UK clubs (O'Shea, Brady), some committed second generation lads (McCarthy, Walters) and the bulk of the squad being made up of LOI "graduates". Who knows, if the league does continue to grow we might even see a player in the squad plying his trade here.

Former League of Ireland players and their appearances in this campaign