Why The Dublin Marathon Is One Of Europe's Great Sporting Experiences

The 2020 KBC Dublin Marathon Race Series was cancelled today because of the coronavirus. It's sad but inevitable news. To whet your appetite for the 2021 event, here's an article written after last year's race by Donny Mahoney of Balls.ie

When I signed up to run the Dublin Marathon this year, I did so as a marathon cynic. All the hours training, all the pain on the day, all for what? To harm your body in an event most physios wouldn’t advise just so you can smuggly lord it over your co-workers and family members for a couple of weeks? Why do we do it ourselves, I asked myself regularly. Surely, in 2019, there are less painful ways to find purpose and achievement.

Well, I finished the Dublin Marathon yesterday and it changed my idea of what a marathon can be. It also made me fully appreciate this capital city of ours for its heart and its splendour.

I ran two marathons in my early thirties, Berlin in 2012 and Reykjavik in 2013. The first one was about the sheer audacity of me, a non-athlete, trying to complete a run at that distance. The second was about trying to actually run one and defy my own limits as a runner. I finished around 3:42 and was happy to never run a marathon again. When a friend suggested training for a marathon last February, I violently recoiled.

But my priorities changed abruptly in the following months. Out of the blue, I felt I needed that ‘thing’ in my life that marathon training provides: both the calming endorphine release of regular long distance running and that far-off date on the calendar to aspire and build to. I just decided to do it on my own terms: training just enough, scrapping any concern with a PB. To run it for its own sake.

The build-up to Sunday was understated. Knowing what was in store from miles 20-26 made it very hard to be excited about the prospect of the race. But on Saturday evening, the dread I’d been feeling all week and the minor panics caused by fretting about carb loads and diet and the physical discomfort from my unusually riotous gut all gave way to calm. I was going for a four hour Sunday run the next day and the forecast was decent.

And that’s more or less how it turned out. I just didn’t think I'd actually enjoy it so much.

There were just so many surreal and joyful scenes along the road of pain. The guy in the Davenport Hotel beforehand who shaved or dyed ‘TEAM PB’ into his chest. Passing the Guardians of the Galaxy crew, with Groot on running stilts, outside Phoenix Park. The ecstatic spectator who met his mom on the course heading into Inchicore. All of the signs reminding me that I’d paid actual money to do this.

And then there were all of the mundanely Irish moments which felt borderline miraculous, like interrupting a conversation between two people as we passed through Chapelizod en route to Inchicore.

Or talking to two guy at the Walkinstown Roundabout, one of whom was wearing a pair of bright yellow Nike Zoomx Vaporfly’s, the same ‘doping’ shoes Kipchoge had broken the 2 hour barrier with.

‘How much did those cost?’ I said

We were all stunned.

‘Ah there’s a definite spring from them,’ he said.

‘Can you imagine running twice as fast?’ the other guy said (we were just behind the four hour balloons).

We all shook our heads. The conversation got quieter as the miles clocked up, but throughout there was this feeling of unity, that we were all bound together, atoms in a sea of slowly-moving bodies.

In that anguishing second half of the marathon, the songs along the way became epic anthems. To the guys who were playing ‘Jailbreak’ out of a ghetto blaster in Kimmage, thank you. To the DJ who was blasting Todd Terje’s ‘Inspector Norse’ around mile 18, it was really appreciated. Five seconds of a song you love can give you ten minutes of momentum.

The committed, constant, full-blooded support of the supporters was something I never expected. It felt like a village marathon. It wasn’t just the outpouring of raucous cheering from Castleknock to Kilmainham to Crumlin to Rathgar to Fosters Avenue, although that was so appreciated. It was the little acts of generosity, like the people on the Clonskeagh Road who had invented a bottle-passing system to keep runners hydrated. It was all the people who’d handed out bananas and Jaffa Cakes and Haribo they’d bought with their own money. There were so many sweets that the Dublin Marathon deserves some sort of special merit of distinction from the world’s sweetmakers governing body. I nearly choked three times on barely-chewed Haribo but I kept accepting the sweets because it felt so right to accept these small tokens of energy. People were so sound.

Before yesterday, my experience of a marathon experience was of an intense personal, borderline existential struggle, of one person stubbornly trying to break their physical limits amid varying urban contexts. Yesterday, Dublin changed that. Running Dublin was a life-affirming communal experience, a Dublin-affirming experience and an Ireland-affirming experience. It was never lonely and rarely quiet. That dreaded wall didn’t come knocking until the top of the Merrion Road, and by then, the really hard running was in the rear view.

In keeping with that communal spirit, it was a real pleasure to run wearing the shirt of the Sanctuary Runners, who build solidarity with people in Direct Provision through the modest act of running and to chat to other Sanctuary Runners on the course and along the side of the road. Running is often a solitary experience, but it can also bring people together. 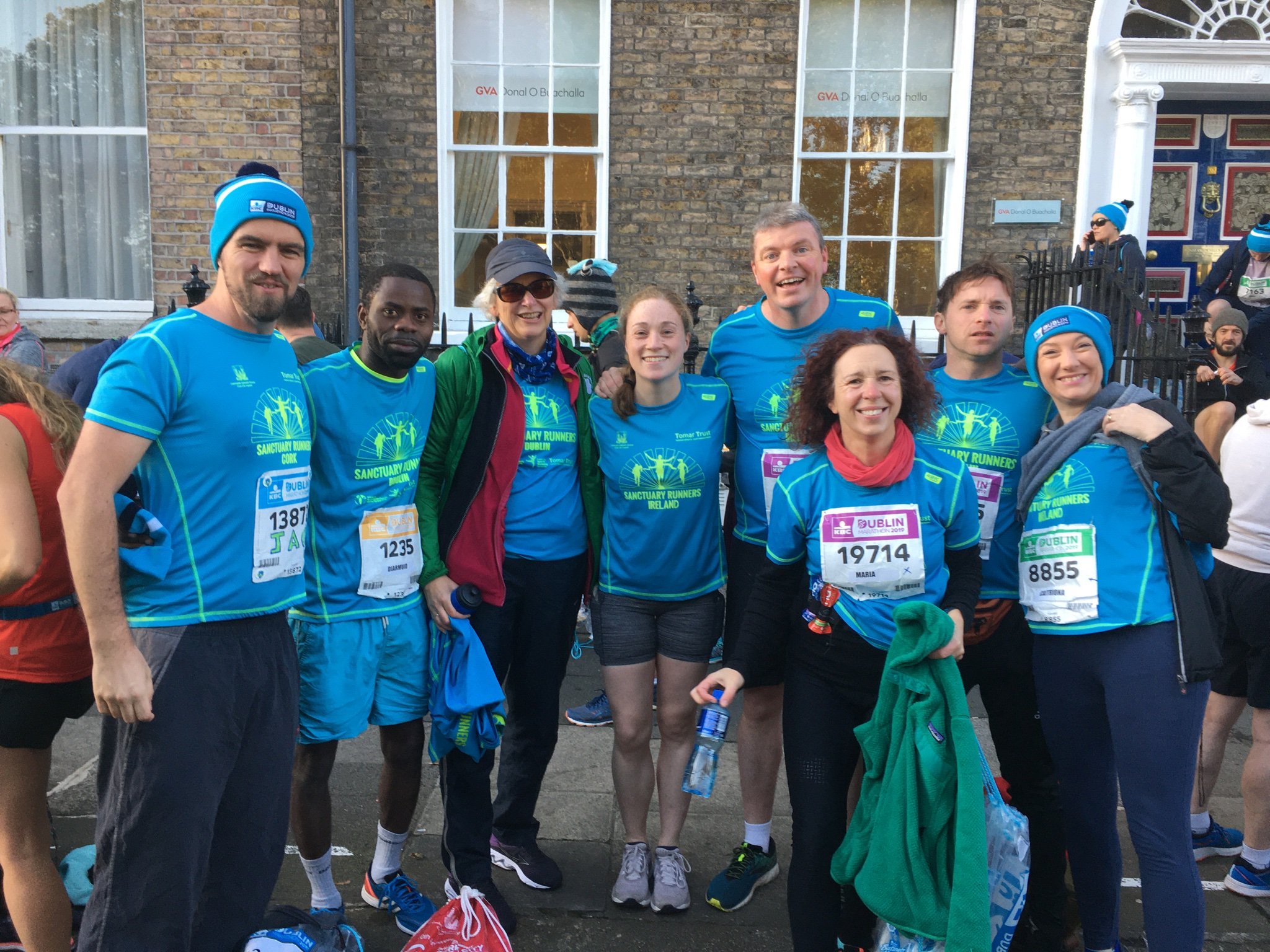 Whether it was the echoey collective roar we runners made passing under the N4 underpass after Chapelizod or the din crossing the canal onto Mount St, there were numerous times I had to swallow the raw emotions of the experience or else I wouldn’t be able to actually run. I don’t think that happens in other marathons, but I could be wrong.

Did it help that the 2019 Dublin Marathon occurred on probably the most beautiful day of the 2019 calendar year, and possibly the most marathon-appropriate day of the decade? Sure. But there are core elements that make Dublin truly unique. I’d been a spectator at Dublin Marathons over the years, but it wasn’t until I ran it that I fully appreciated that the Dublin Marathon is one of Europe’s great sporting experiences.

And that’s because of all of us.

Now, if only we could get Deliveroo to deliver Deep Heat.

Athletics
4 weeks ago
By Donny Mahoney
Sean Hehir Overcame A Lot To Win The KBC Virtual Dublin Marathon
Fuel
1 month ago
By Vickey Nolan
10 Ways To Stay Mentally And Physically Healthy As The Lockdown Returns
Fuel
1 month ago
By Balls Team
Meal Time Madness? It's Time For A Prep Talk
Previous Next