Over Half Of Student Inter-County GAA Players Overwhelmed By Commitments

54 per cent of student inter-county footballers and hurlers regularly feel overwhelmed by their commitments. That is according the Gaelic Players Association's student report for 2019.

Over one third of GPA members are students with 63 per cent them aged between 21 and 24.

78 per cent say they feel stressed at least once a month, up 24 per cent from the previous report four years ago.

69 per cent (up 13 per cent from 2015) say they would like to dedicate more time to their studies, while 65 per cent feel training commitments negatively affect their academic performance.

35 per cent of student GPA members have had to repeat a college exam and 11 per cent an entire year.

For 70 per cent, their training load includes travelling home three or more times per week with just under half feel confident enough to engage with their county manager about reducing their commitments.

A massive 80 per cent say that being a student athlete puts financial pressure on their family while only one third are in a position to work part-time.

The report includes a number of recommendations which the GPA will look to put into action. Those include the introduction of a mental health literacy workshop which will be offered to inter-county squads; identifying flexible employment opportunities for players; the development of a financial advice programme. 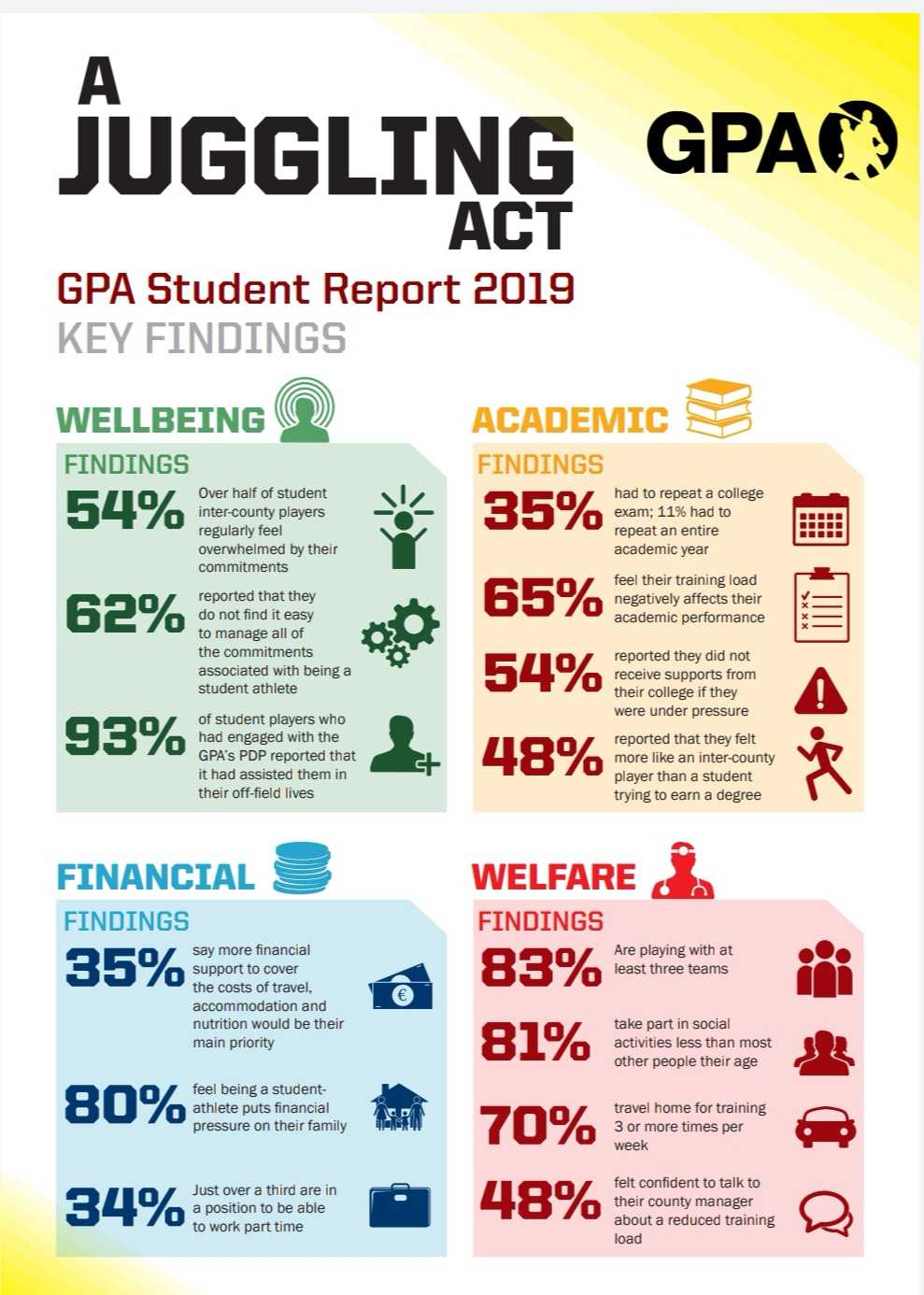 "Being a player should help our members develop valuable transferable skills and not prohibit them from performing to an optimal level academically, or negatively impact them financially, physically or emotionally," said GPA CEO Paul Flynn.

"Without a doubt, the demands on student players has never been greater but with the right supports in place they can achieve greater success in life and make a positive contribution to the overall college environment."

Fuel
2 months ago
By Sean Meehan
WIN - A WHOOP 4.0 Strap And 12 Month Membership
The Rewind
2 months ago
By Jonathan Browne
Have A Look At The Chris Hemsworth Workout For Extraction 2
27

Fuel
2 months ago
By Sean Meehan
A Day In The Life Of A WHOOP User: Lauren Guilfoyle's WHOOP Diary
Previous Next

Fuel
2 months ago
By Sean Meehan
WIN - A WHOOP 4.0 Strap And 12 Month Membership
The Rewind
2 months ago
By Jonathan Browne
Have A Look At The Chris Hemsworth Workout For Extraction 2
Fuel
2 months ago
By Sean Meehan
A Day In The Life Of A WHOOP User: Lauren Guilfoyle's WHOOP Diary
Popular on Balls
Rugby
1 day ago
By PJ Browne
Jackman Explains How Barman Helped Connacht Recruit Mack Hansen
The Rewind
17 hours ago
By Colman Stanley
New On Netflix Ireland: Your Guide To December's New Additions
Football
20 hours ago
By PJ Browne
MK Dons Boss Criticises Troy Parrott After Red Card Against Leyton Orient
Football
19 hours ago
By Jonathan Browne
Ralf Rangnick's Manchester United Transfer Wishlist Contains Some Massive Talent