This refers to a club player who was called up to the county panel for a short period. The around the panel players often find themselves stuck in limbo; better than your average club player but not quite good enough to hold onto a place in the county squad.

'Brady? Wasn't he around the panel for a while? Back in '09? Whatever became of him?'

A cute hoor of a corner forward who is impossible to get your hands on.

'Now Francie the lad you'll be on is a wirey fella but no betther man to kick the wireness out of him than you!' 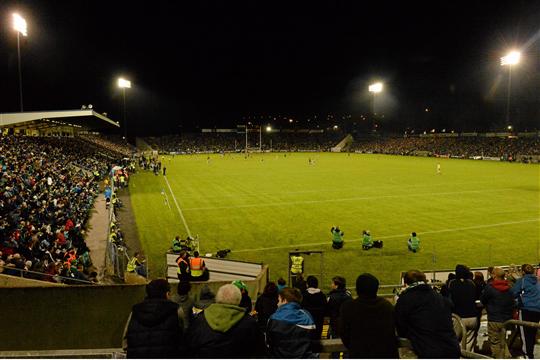 There is an unwritten rule than all GAA pitches, even those in the middle of the countryside, are built perpendicular to the nearest urban centre, as opposed to being built parallel. This is needed so 'the town end' can be used as a point of reference by captains and managers at the coin toss, and by journalists.

You never hear 'Lionel Messi scored a great goal into the town end of the Camp Nou.'

'Right lads, we'll be kickin into the town out this half. We've the wind behind us and we're playin down the hill. Go hard and go early!'

Contrary to what you might presume, a third man tackle involves only one tackler. It refers to a foul where a player is obstructed or challenged while not in possession of the ball. Little known fact, the third man tackle was invented by Joe Kernan in the early 2000s – or so the 'purists' believe.

This phrase has nothing to do with the actual cleanliness of the ball. 'Dirty ball' is a reference to when the ball drops between both 45 metre lines, usually after a kick-out. A player who can emerge with possession amidst the forest of legs and arms that go in chase of said dirty ball has become perhaps the most valuable member of a Gaelic football team in recent years.

'Paul Galvin will be a big loss to Kerry.' 'Jaysis he will. He was a great man to win dirty ball.' 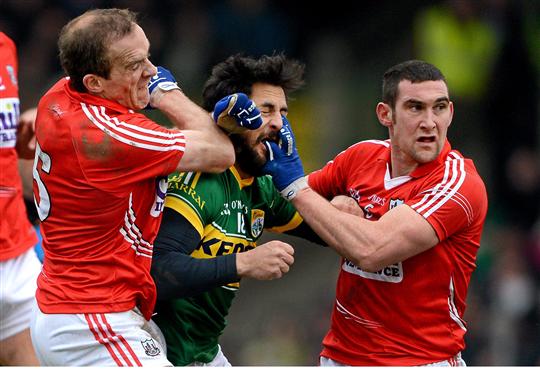 'Ah ref! One hand! One hand! (usually includes over dramatic gesture of player furiously pointing to one of his arms)

'Two hands' is commonly shouted by supporters and members of management teams after one of their players goes up for a high ball with just one hand. There is not many worse offences a player can commit on a football field than attempting to contest a high ball with one hand.

A word which exists in the English solely for the purpose of declaring that a new manager has been appointed to a GAA team or that the sitting manager has been ratified for another year. Also occasionally used when declaring a new Pope.

‘I hear O’Keefe is going to be the new manager?’ ‘Ho ho I wouldn’t count my chickens, the hoor hasn’t been ratified yet?’ 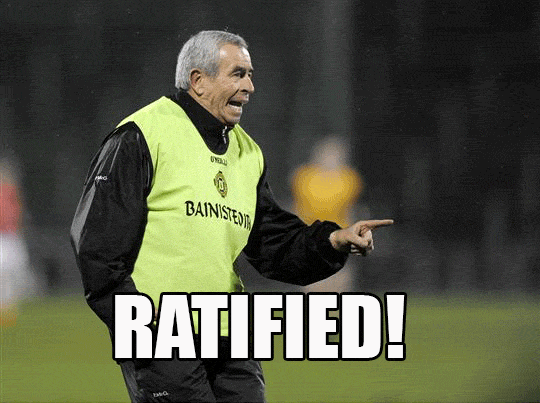 In GAA there is an unwritten rule that when an opposition player is taking a set-piece shot at goal no one is allowed to heckle or shout anything to put them off apart from the goalkeeper. They are free to harass him/her but on the condition that the only thing they shout is ‘Post.’

A shemozzle is a row on a GAA pitch that is more serious than handbags but not as violent as a fraca or a melee.  Consider it like this: if there is more than two people involved in the row then it's at least a shemozzle, however if a headbutt or a dangerous punch is thrown then it's worse than a shemozzle. When subs, fans or members of management get involved then the row officially takes on the term 'shameful scenes.'

'Lads lads! There's a row after starti... Oh wait it's only a shemozzle.' 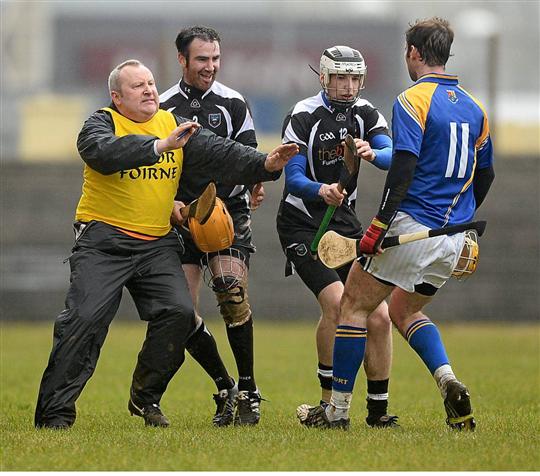 'There's a shemozzle inside the parallelogram. No one knows where the sliotar is but they're bate'n lumps out of each other.'

An other term for the small parallelogram with makes little sense when you consider the fact that it's actually rectangular.

'We're throwin on Big Nixie and we want yous to lump it into him on the edge of the square.' 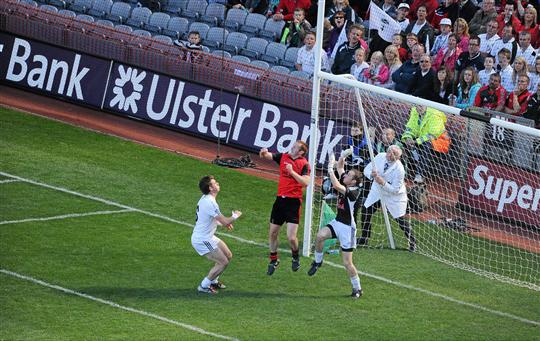 AN Other was something used widely back when managers were honest. They'd name their starting 15 a few days before a match and if a player was doubtful due to an injury then AN Other would signify that the player starting in that specific position wouldn't be decided until closer to throw-in.

Slightly interesting side point: Jackie Stewart raced under the alias of AN Other in his early career as his mother wouldn't let him race.

Another way of saying corner forward. Worthy of a mention because while this is a totally acceptable term to use, 'bottom of the right/left' when referring to a corner back is a big no no.

'And at top of the right we have Joe Deane.'

Another great term used to describe a certain position, 'the 40' doesn't actually make much sense when you think about it. It is another way of saying centre half forward but that's a position that's usually at least 50 yards out from goal so why the number 40 is brought into it is anyone's guess.

'The Gooch was magic last year. That move out to the 40 really gave him a new lease of life.'

The official terminology when breaking the news that a GAA pitch is unplayable due to adverse weather conditions.

'No training tonight lad. The pitch is in shite.' 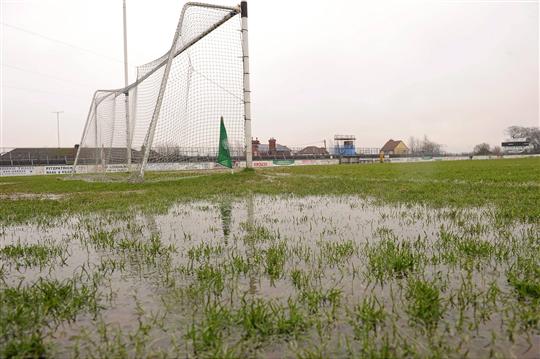 A highly popular phrase, often shouted by old men in the stands who have reached the end of their tether with some of the pitiful attempts by players at executing the simplest of skills on the playing field. 'One of yis' is roared when two players from the same team go for the ball and end up scuppering each other's attempt at gaining possession.

A specified role on a GAA team, it is used to refer to a player who possesses no real skills on the ball but has the ability to throw himself about and cause disruption for the opposition . They are a variant on the type of player who is good at winning dirty ball winners. However, while players such a Paul Galvin also possess the skill to do something inventive while in possession, other dirty ball winners are merely there to break up play and lay the ball off straight away.

'Jesus, John Rafferty's son is fairly useless isn't he?' 'Ah he's a good man to break up play though.'

When a referee shows a player the line it does not entail them giving said player a walking exhibition of the pitch markings. It is in fact a metaphor used for saying someone was given a red card.

'After clearing house with his hurl and leaving a hospital of broken bodies in his wake, Jimmy the cut-throat Hennessy was shown the line by the referee. There was no malice in what he did though.' 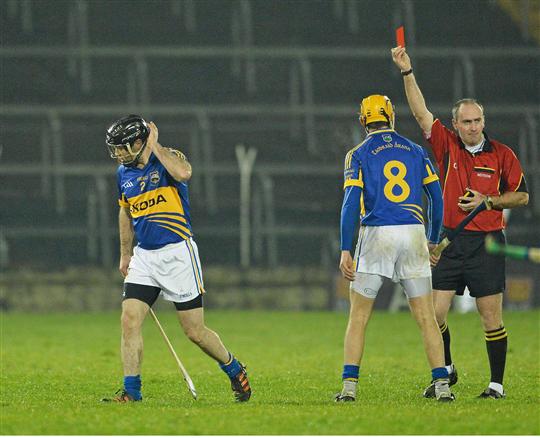 Over the last few years the moans about the GAA taking 'physicality' out of both football and hurling have become insufferable. 'Physicality' is a word bandied about by those terrified by the other main aspect of Gaelic Games: skill. Followers of this school of thought complain that the black card is an effort to take physicality out of the game of football, they are the people who lament the fact that there are red and yellow cards in hurling, and those who long for the days of full backs who would leave his opponent needing an ambulance.

To a sane mind it's quite evident that the GAA have not taken any legal 'physicality' out of the game but this is a point which lost on this group of stubborn minded traditionalists.

'The fucker of a ref sent him off giving yer man a punch he was lookin' for. I'm telling ye it's a disgrace! They're taking all the physicality out of the game.'

A group of players who must satisfy at least one of the following criteria:

a) Have had success at underage level in recent years.

b) Have recently been promoted from the lower divisions of the National Football League.

c) Have just been gallantly beaten by a far superior team, after they got a late point to win it.

'They'll be threat soon ye know. They're a coming team. Sure they'll soon have the lads of that U14 team that won the championship five years ago.' 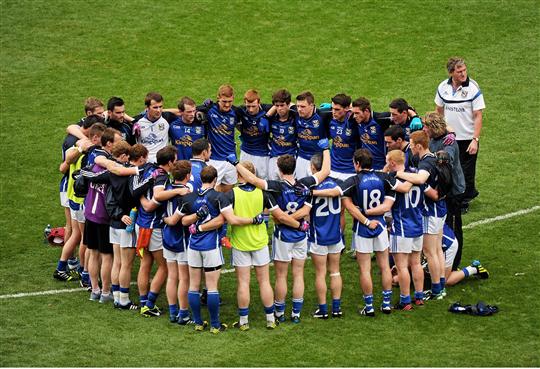 Dummy teams are the reason why AN Other has become extinct.

One of the most pointless exercises in the GAA is when a county manager names his starting team for an upcoming championship match. The team is reported in the media, possible game plans discussed and then match day comes and the whole team has been changed.

It seems to be the case that managers think they've completely thrown the opposition's match preparations into disarray by naming these dummy teams when really they've just a massive pain in the arse to the poor sods who have just forked out on a match programme.

I'll pretend McGee won't be fit and name a dummy team with my full back line in the full forward line and my goalkeeper at midfield. That'll throw them.

Check out: 20 GAA Teammates You Want To Murder

Football
10 months ago
By Mark Farrelly
68 Examples Showcasing The Absolute Ridiculousness Of Irish Sporting Photo Shoots
Rugby
1 year ago
By Balls Team
11 Infuriating Habits Irish Sports Fans Need To Give Up For Lent
random
6 years ago
By Donny Mahoney
PODCAST: Episode 1 Of The Balls Book Club With John Leonard
Previous Next