The Balls.ie Selection For The Hurling PwC All-Stars

The inter-county season may be at an end but now attention turns to the PwC All-Star awards. Tipperary's triumph has them well placed to secure several accolades but competition is fierce across the board.

After much debate and discussion, a final selection will receive their awards at the banquet in Dublin on Friday. The PwC All-Star hurling team itself will be released tomorrow morning. As for the football team and the overall Player of the Year accolades, they will be announced live from the event which will be televised on RTE One from 7.00pm.

Our own selection can be seen below. If you have any disagreements or rearrangements, you can pick your team on the PwC App. 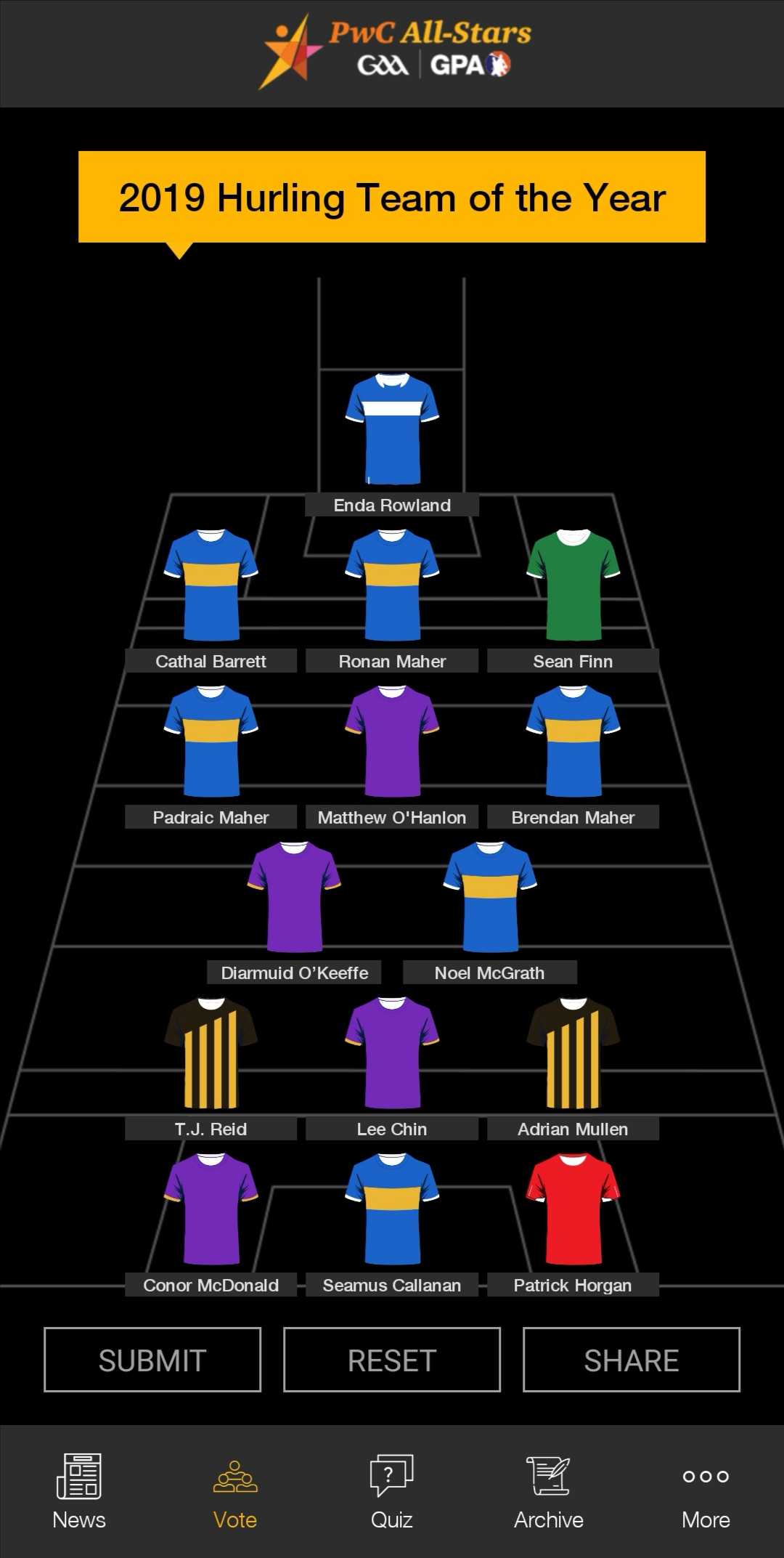 A man who knows plenty about winning All-Stars is former Tipperary goalkeeper Brendan Cummins. Speaking on the Balls.ie PwC All-Stars Debate Show, he explained why the Laois shot-stopper has the edge.

I saw Enda Rowland play in the flesh four times this year. I saw Eoin Murphy play five times. And when I sat back a couple of weeks after the All-Ireland, and I took the emotion out of it, and all the perceptions I have of how good Eoin Murphy is, I said to myself, 'well maybe Enda Rowland had slightly a better year.'

The full-back line picks itself with Cathal Barrett's consistency, Ronan Maher's big game showings and Sean Finn's defensive masterclasses seeing them make the team. At centre-back, Matthew O'Hanlon gets the nod. It can be challenging when selecting a sweeper to know where to put them but like many centre-backs this year the Wexford man held the centre more often than not.

Alongside him, both Maher's finish out the back six. In midfield, he may have been unlucky to not be nominated for player of the year but Noel McGrath is assured his Pwc All-Star. Diarmuid O'Keeffe fends off competition from Limerick playmaker Cian Lynch.

5-83 with an average of 12.25 per game means the terrific TJ Reid slots in. Lee Chin produced some powerful performances this year while the likely young hurler of the year Adrian Mullen also gets in.

Patrick Horgan's heroics in the All-Ireland quarter-final were just the icing on the cake of an outstanding championship. He finished with 7-62 in total. Conor McDonald was a crucial part of Davy Fitzgerald's system and often did it alone without much support on the edge of the square.

Last but not least, the favourite for player of the year is Tipperary captain Seamus Callanan. Eight goals in eight games, what a feat.

Hurling
1 year ago
By Michael McCarthy
Quiz: Do You Remember The 2019 Intercounty Football And Hurling Championships?
GAA
2 years ago
By Mark Farrelly
Nominations For PwC Hurling All-Stars And Player Of The Year Revealed
GAA
2 years ago
By Maurice Brosnan
Liam Sheedy Could Finally Do What Has Never Been Done In The Cody Era
Popular on Balls
Rugby
2 days ago
By Colman Stanley
Keith Earls Shares Story That Captures Andy Farrell's Decency
Football
2 days ago
By PJ Browne
'If He Continues With Performances And Goals Like That, Stephen Kenny Will See It'
Football
2 days ago
By Eoin Harrington
Quiz: Name Every Player To Score In A Champions League Final
Football
1 day ago
By Gary Connaughton
Portsmouth Likely To Retain Gavin Bazunu This Month Despite Championship Interest