Balls Investigates: Was The Dog A Ruse By Cavan To Disrupt Monaghan?

The postmortem began on the sound of the final whistle.

How did Monaghan, last year's All-Ireland semi-finalists, suffer defeat against Cavan, a side that hadn't beaten their neighbours in the championship since 2001?

There had to be an explanation. Surely.

And, it seems, one Monaghan supporter has found it. As innocent as he looked, the pooch invader was part of an intricate plan designed to interrupt Monaghan momentum during the game.

🐶There was an enforced 'paws' in play during Cavan v Monaghan... pic.twitter.com/zeBgsndxBg

The fan in question took to an online GAA forum on the Hoganstand.com to give details of these shocking developments.

The dog was another obvious ploy arranged by Cavan, believe it or not. The dog was on the field at the end of the minor match and this was another pre-planned move, to introduce [the dog] at the right time to give Cavan an advantage and stop Monaghan from getting any momentum.

I bet that might surprise a few but I am sure of it from a reliable source. It's not the first time it has happened at Breffni.

Another anonymous whistle-blower revealed that this was, in fact, not the first event of its kind in Ulster. 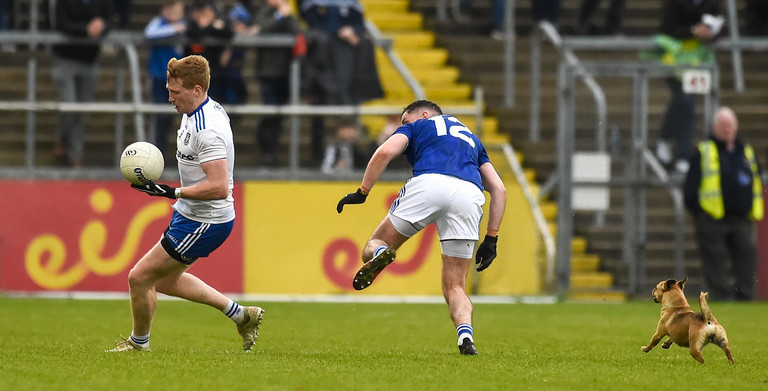 Needless to say, it sets a worrying precedent. The reputation of cynical tactics in the province is quickly becoming something far more sinister indeed.

The dog did originally go off to come back on for that minute of running around where the stewards did absolutely nothing. Last year in Clones a stray ball kept going on the pitch as Kerry restarted play. It's all about gaining small margins as they say.

Clearly, there is one flaw in the reasoning of the original poster - there was no minor match preceding the main event. However, this issue was quickly by the original whistle-blower.

It was the hurling match - slip of the tongue, for God's sake! The 'same' dog was on the field after the whistle blew in one of the Cavan hurling player's arms, and the arms of a steward in front of the dugout.

If you remember correctly, Monaghan did have the ball when the dog came on and were playing catch-up big time, and it was important for Cavan we did not tag on too many scores before half-time. Believe it or not, it was a pre-planned move!

This led to an in-depth investigation within Balls HQ and we can confirm that this is, in fact, a conspiracy theory. But how did such scandalous information ever reach the light of day, Moreover, the information is understood to be coming from a "reliable source". 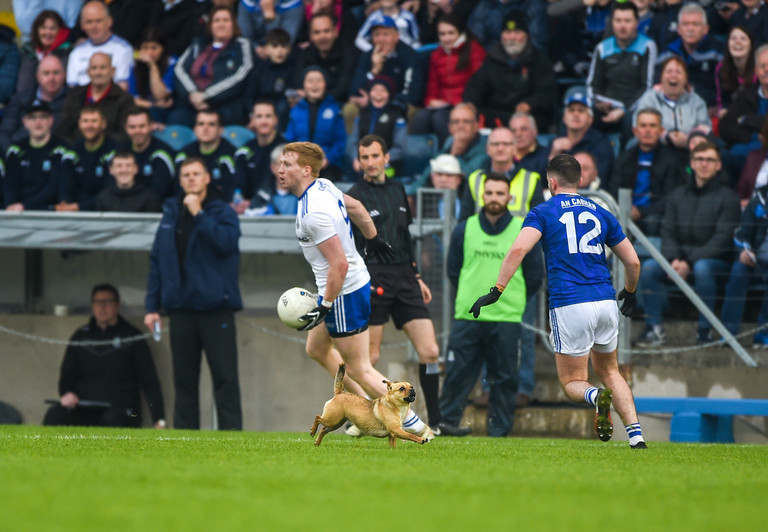 Upon further investigation the team at Balls.ie have discovered the man behind such scurrilous accusations - and we didn't have to look far for him.

As it happens, the culprit is our very own Mark Farrelly.

Discussing the weekend's actions on this week's Three Man Weave, the Balls.ie GAA podcast, Mark had some very interesting comments regarding our canine friend.

Subscribe to the podcast here or by searching 'Balls.ie Podcasts' on all good podcast apps. Skip to 2:40 below to hear the full discussion on the unexpected pitch invader last Saturday.

Interestingly enough, Mickey Graham's father was one of the stewards who was trying to apprehend the dog and he wasn't doing a very good job of it.

So, I wonder, was the dog planted? Because he caught up with play right at the moment Monaghan were approaching the Cavan '45 on the attack.

So maybe this was some sort of ruse by the entire Graham household.

The question remains - Was this simply a comment made in jest that got completely out of hand, or is this the unveiling of some sinister Cavan Illuminati?

Neither possibility can be totally ignored at this juncture.

SEE ALSO: GAA TV - Is This The Solution To The Current Coverage Mess?