'I Love Playing Gaelic... To Play For Your County Is A Big Deal'

The Westmeath footballer would prefer to be playing just a little bit further up the pitch; wing-back would be good.

"All I'm told is 'Mark this guy. Forget about everything else. Don't even get on the ball.'

"At the moment, my game is changing a little bit, I'm getting used to playing there; marking tougher lads in training."

Despite his dislike of the position, there is still a joy in the station: he's beginning to establish himself as a starter.

"Last year in the championship I played one game in the qualifiers against Armagh, playing wing-back.

"This is my first year playing more in the league. We've nearly all the league games played. If I can nail down a position during the league, I'd be happy out to play championship games.

"I think I'm nailing down a position - don't jinx it now!"

Against Down last month, Sayeh - who was born in Liberia and moved to Westmeath aged eight - scored his first point in the league against Down.

"Glad you brought that up!" he jokes while speaking at the launch of the 2019 Renault GAA World Games.

Last year I scored a point in the championship against Armagh, just gonna put that out there! But, yeah, that was my first point during the league.

I'm trying to get up there more. I went down the wing and got in behind and Denis Corroon slipped me the ball and I just popped it over so it was an easy score - I wouldn't want to hype it up too much!

Promotion from Divison 3 was the main aim for Westmeath this year. With two games to go, they are well-placed just behind leaders Down.

Sayeh says there's a good vibe among the panel, one fostered by new manager Jack Cooney. 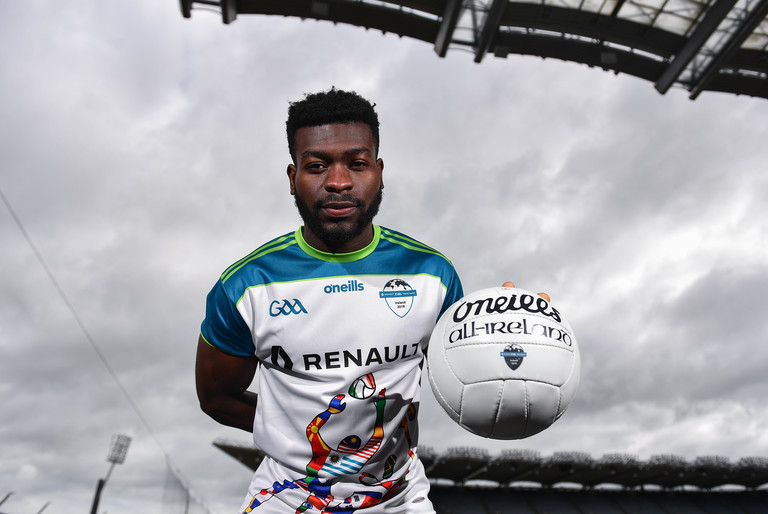 That passion is certainly present in the 23-year-old.

"To play for your county is a big deal. It’s a big deal in Westmeath anyway.

"I never really thought ‘I want to play Gaelic because I want to get this out of it.’ I just play Gaelic because I love playing Gaelic and I love the players, I have fun with the lads - a few of my best friends are on the team - so I never really thought about ‘I must get a lifestyle.' I play because it’s good fun, it’s good craic. Kieran Martin is probably one of my best mates. Eoin Carberry as well, he's my club and he's goalkeeper at the moment. They'd be two of my main friends.

"If I wasn't playing Gaelic I dunno, I'd be stressing out doing something else. It's kind of a stress release, you go down and chill and play ball - you do something you like. If I was studying all the time I'd probably be depressed, but it's something to relieve the stress. When you're playing football, everything else is kind of pushed aside.

"It is addictive. Even my sister would be like, 'Why do you even bother playing?' But it's addictive, especially if you're doing well. If you're doing well it's even more addictive I think. You're training, trying to get the best out of your lifestyle - you can't go wrong doing that."

Above: Westmeath footballer Boidu Sayeh during the Renault GAA World Games 2019 Launch at Croke Park in Dublin. Photos by Sportsfile

Kieran Duff: 'It Does Hurt When You Are Getting Nothing But Negative Press And Being Called A Thug'

GAA
1 year ago
By PJ Browne
From War-Torn Liberia To Westmeath: The Remarkable Story Of Boidu Sayeh