There has always been an element of competition between Sportsfile's photographers, a desire to get the best shot of the weekend, to get a better one than your colleague did last week.

In previous years, action photos - the need to document what's happening on the pitch - would have been the focus. The arrival of the Covid-19 pandemic changed that somewhat.

Shots of hurlers, footballers and camogie players doing what they do are still filed but there is also a requirement to place these matches within a wider context of the situation in which Gaelic games, like every other sport, finds itself at the moment.

The shot of a player receiving physio treatment in a car park with a cow in the background or one with a pitch and putt game going on just over the fence are the ones viewed with jealous eyes.

These are strange times. AIB and Sportsfile have teamed up to create a picture book, The Toughest Season, which will capture the resilience of GAA communities this year.

They are looking for people nationwide to contribute pictures of their own club and community from the past few months. There are no strict criteria for inclusion other than images should reflect the special place occupied by Gaelic Games in Irish society. People can enter by using the hashtag #TheToughest on social media or through the form at the bottom of this article.

We spoke to Sportsfile's Brendan Moran, one of Ireland's most renowned photographers, about some of the shots he's taken this year which capture this most unusual season.

"An awful lot of uncertainty" 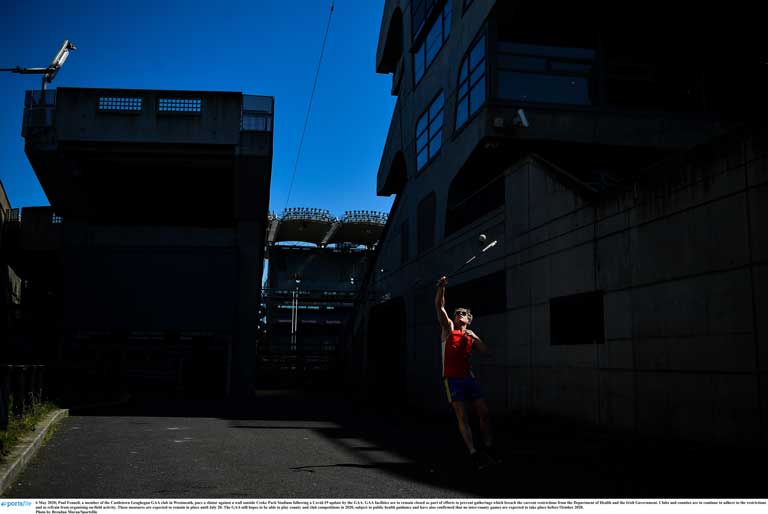 6 May 2020; Paul Fennell, a member of the Castletown Geoghegan GAA club in Westmeath, pucks a sliotar against a wall outside Croke Park Stadium. Picture credit: Brendan Moran/Sportsfile

"There was an awful lot of uncertainty at the start of this and we didn't know what was going to happen.

"When the lockdown started, we were going around photographing signs of closed pitches. I took a spin towards Croke Park one day just to see if there was a bit of human element. As I came around by Jones Road, I spotted somebody just pucking the ball against the wall there.

"He was actually from a hurling club in Westmeath but living locally. At this stage, the lockdown had been going a month and a half. He went for a puck around just to get out of the house. It was a beautiful, beautiful day. It wasn't anything that was set up or organised.

"I love his red shirt because it just makes it. If he'd been wearing black or a duller colour, it wouldn't really have made a photograph. It's a question of luck and being in the right place at the right time.

"I just thought it was apt because it was the closest that any one would get to pucking a ball on the Croke Park pitch for six months.

"Trying to put it in a Croke Park context is difficult because you can't see into the stadium. That's about the only place that you can actually see in." 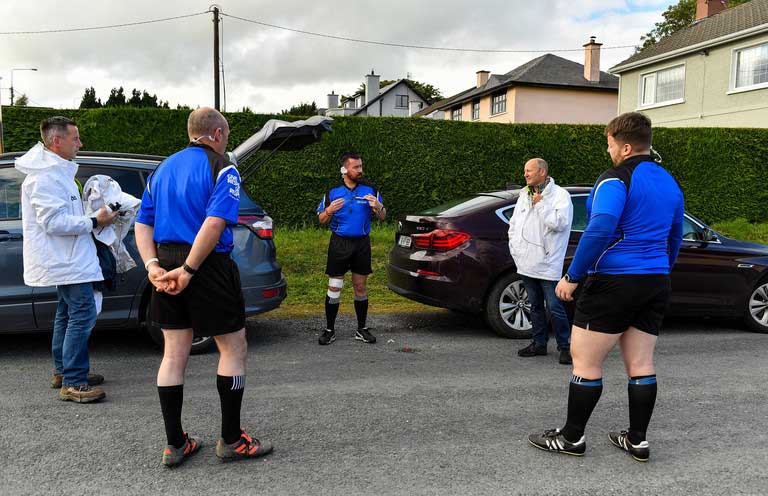 25 July 2020; Referee Seamus Mulvihill, centre, speaks to his match officials, from left, Pat Sheehan, Thomas Harold, John Dineen and Maurice Murphy at the entrance to the ground prior to the Kerry Senior Club Football Championship Group 2 Round 1 match between Kilcummin and Killarney Legion at Lewis Road in Killarney, Kerry. Picture credit: Brendan Moran/Sportsfile

"It would have been one of the first games I had done after lockdown. I photographed Kerins O'Rahillys and Kenmare earlier on in the day in Fitzgerald Stadium. It was a very strange time, a strange game.

"Then I had to go across the road later on that evening and photograph the Legion. You're looking out for an unusual picture. Dressing rooms are closed. Players are showing up with their kit on.

"It's unusual to have that scene outdoors, normally that's done in the confines of the dressing room. He does his match briefing and he speaks all his match officials about what he expects and everything.

"People do need something to look forward to. Working in the sports industry, it's been very tough for us as well. We're trying to do our best to get back and do what we can. It was important that because people couldn't attend games, that there was coverage.

"You hear experts talking about the mental health of the nation. I suppose, in some small way, if we can help contribute to the ease of people's difficulties, show them that we will get back from this and life will eventually continue, that's a good thing." 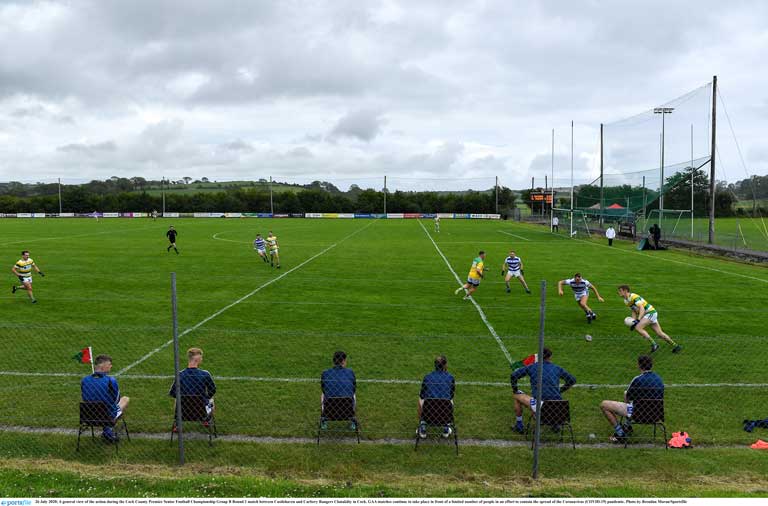 26 July 2020; Castlehaven substitutes socially distance themselves on the sideline during the Cork Premier SFC Group B Round 1 match against Carbery Rangers in Clonakilty in Cork. Picture credit: Brendan Moran/Sportsfile

"I found this quite a quirky little picture. You go to a venue and you just don't know what's going to be there at any given time.

"I was just looking out for something unusual and it just happened to be the subs. They're not allowed sit in the dugouts. Clubs everywhere are trying to do their best. They're trying to come up with ways of coping and adhering to the rules."

"The speed of hurling" 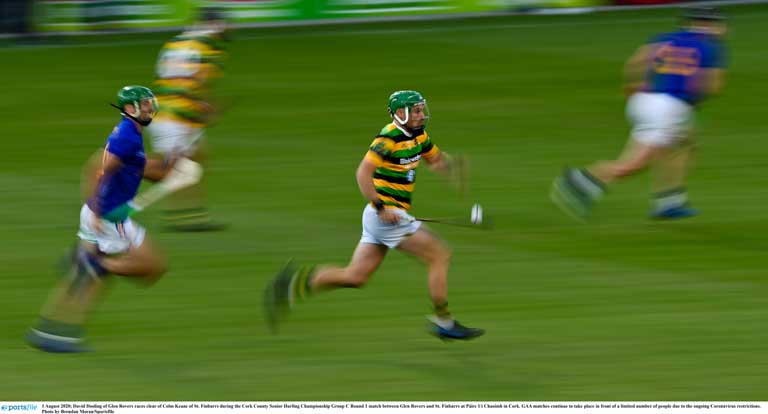 "As photographers, we like to have crowds in the pictures. For us, it's very difficult to take good pictures in a place that's empty.

"It would be a different situation to a usual inter-county championship game where we need loads of action pictures. I did a few pictures in the first half, and so I was trying something a little bit different in the second half, to see if I could just get a nice photograph.

"It's quite a tough photograph to execute. When you do get one like this, it just shows the speed of hurling. Even though the world had stopped and GAA has stopped for a while, when players are back out they're giving their all, they're just champing at the bit for months to get to playing.

"You have to wait for the right type of play. You might only get somebody soloing like that two or three times in 10 minutes. It's a calculated risk. There's a lot of patience involved. You have to stick to your guns and believe, 'If it's happens, I'll get a good picture'."

"This picture could have been taken by anybody" 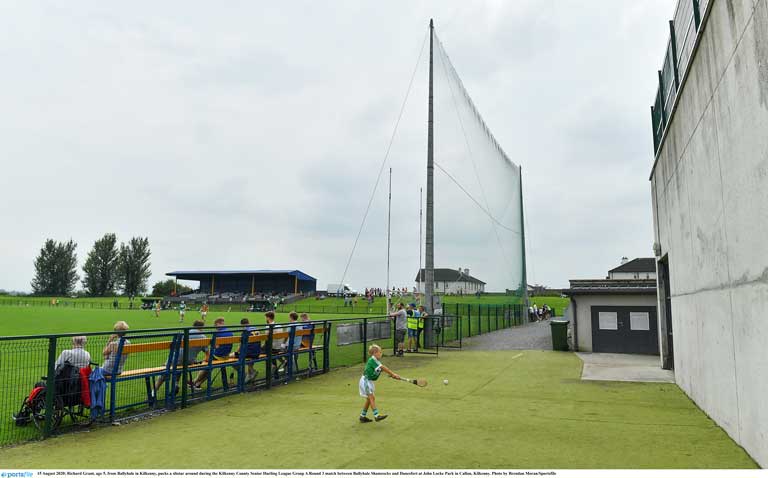 15 August 2020; Richard Grant, age 5, from Ballyhale in Kilkenny, pucks a sliotar around during the Kilkenny Senior Hurling League Group A Round 3 match between Ballyhale Shamrocks and Danesfort at John Locke Park in Callan, Kilkenny. Photo by Brendan Moran/Sportsfile

"You don't have to be a professional to take a good photograph. This picture could have been taken by anybody.

"I just like this young fella pucking around. I spoke to his mum and made sure she was OK with me taking it. He was just kind of happy in his own little world and the match was going on in the background. That that was his day out. He wasn't worried about Ballyhale winning.

"We did go to grounds that we probably never would have been to in the past because there would be intercounty games or there might have been other stuff on. People welcomed us in. There was a great freedom to it.

"There was also a bit of a challenge in that if you didn't have anything by half time that was a bit unusual, you were starting to panic." 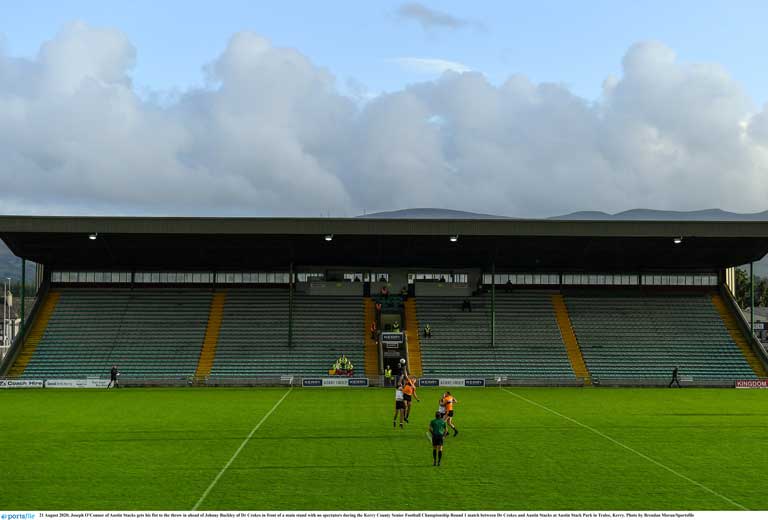 21 August 2020; Joseph O’Connor of Austin Stacks gets his fist to the throw-in ahead of Johnny Buckley of Dr Crokes in front of  the main stand at Austin Stack Park in Tralee during the Kerry SFC Round 1 match .Photo by Brendan Moran/Sportsfile

Any time Dr Crokes and Austin Stacks would have met in the past, you would have had a good crowd. There would be a draw to this game and a bit of a rivalry there as well. Stacks from Tralee and Crokes from Killarney.

"So I tried to portray that the stand is empty at Austin Stack Park. That would never happen for a game with those two teams in normal circumstances.

"In 20 years, in 50 years time, we'll be explaining what went on. Through photographs, it's easier to get people to understand. They'll learn from history books, newspapers and the internet but sometimes a picture can just put across the gravity of the situation at a glance rather than simply have to read three or four paragraphs.

"This just shows that nobody was allowed into the games even with the biggest clubs playing. We're trying to record it for history as much as anything."

Ray McManus: 'When You're Taking A Picture Like That, There's Kind Of A Radiation' 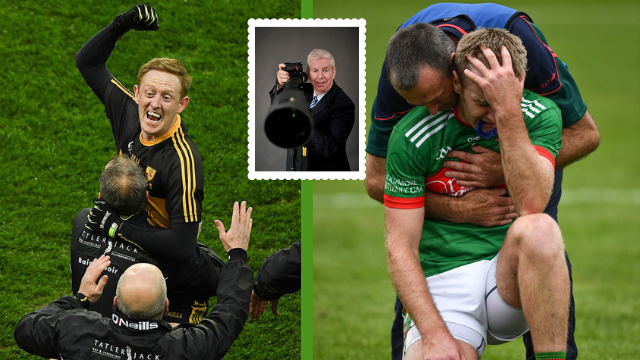