The GAA was shaken last month, when Monaghan under-20 football captain Brendan Óg Ó Dufaigh died in a car crash while returning home from their Ulster semi-final win over Donegal.

The tragic news was a shock to the entire sporting community in Ireland, and Ó Dufaigh's father Brendan Sr gave an emotional interview to RTÉ Radio One this morning remembering his late son.

It was Tony Graham, one of the mentors of the team, who called me. And I talked about the second half turn around in the match because Monaghan had been doing pretty poorly in the first half. And he cut me off and said, 'I'm not on the phone to talk to you about the match, Ógie was in an accident.'

I called Claire, we went out to the scene. On the way out we discussed it, had he a broken leg? Or two broken legs? But we never dreamt that his life might be in peril or that he might be dead.

We saw him sitting up in the car with a paramedic holding his head up straight. He looked peaceful. He was unconscious, he was possibly dead, but I didn't take that in. I'm not sure if that was shock or denial or a combination of both. I spoke to him in Irish, I said, "Ógie, daidí anseo, an bhfuil tú ceart go leor Ógie?"

He didn't respond. He was possibly dead at that stage. I didn't recognise that, I didn't understand that, I was pulled away from the scene by the services as they removed his body from the car. I felt useless that there was nothing I could do.

Maybe about an hour later they were working on him on the side of the road, for possibly an hour. A sergeant approached me, she sat me down on the side of the road and said to me, "I'm sorry." And that was enough, I knew Ógie was dead. It was the most horrible moment of my life to be told that my 19-year-old son, my only son, was dead.

Tributes poured in from far and wide for Ó Dufaigh back in July, with figures from the GAA and wider sporting community remembering a young footballer with so much potential.

The country was deeply saddened by the recent death of U20 Monaghan captain, Brendan Óg Ó Dufaigh. Today his father Brendan bravely shared some wonderful memories of his beautiful son, Óige, and talks of the overwhelming support from his local GAA club and the people of Ireland❤️ pic.twitter.com/W4ZRmXD6wQ

His father, however, said that the tributes from those close to "Ógie" opened his family's eyes to a side of him that would rarely have been seen.

I suppose the relationship between parents and their children changes as they get older. Maybe teenagers don't share everything with their parents - and that would have been the case with Ógie, we didn't really know him properly until his death.

During the wake at our home, we heard so many stories from so many people of his acts of kindness to others, and that's been very comforting for us and it has left us very proud.

He was giving lifts home to friends after parties, helping friends with mental health issues, coming to the aid of a peer who was assaulted on the street one weekend night, and also repairing friends' cars. We weren't aware of any of this - he certainly didn't do it to get any brownie points with his parents.

These stories that were recalled to us repeatedly at the wakehouse, they certainly will remain with us.

It wasn't just Gaelic football that Ógie was interested in playing, with his father detailing the success he had found in soccer, basketball, and swimming alongside his long-term commitment to the Monaghan GAA setup.

Brendan Óg was captain of the Monaghan under-20s when they took their sensational Ulster semi-final win over Donegal, and his father said that Ógie captaining his country was something that would resonate with him for the rest of his life. 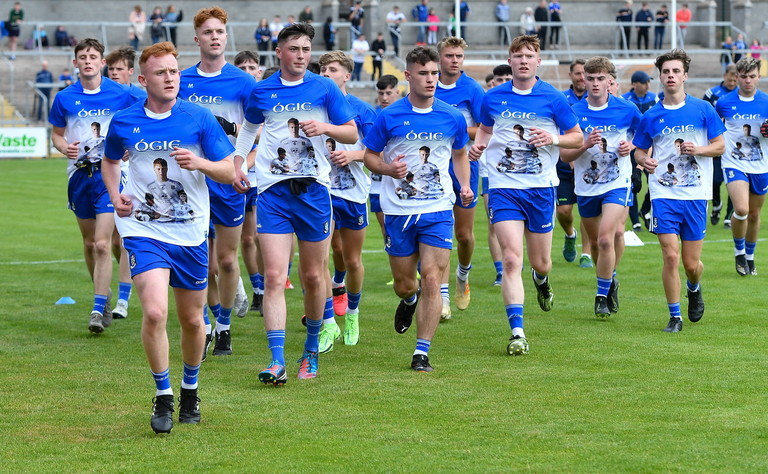 Monaghan players wears shirts in honour of the late Brendan Óg Ó Dufaigh, captain of the Monaghan U20 football team, in the warm-up before the Ulster Football U20 Championship Final match between Down and Monaghan at Athletic Grounds in Armagh. Photo by Piaras Ó Mídheach/Sportsfile

It was an emotional interview, with Ó Dufaigh fighting back tears at multiple points, and he said that he chose to appear on the RTÉ show to give support to other parents who may be suffering similar tragedies.

Coming in here this morning, I've tried to remove myself from it if you like. We of course are very lonely, there's an overwhelming sense of numbness and emptiness and that will remain with us, but I've to park those emotions and those feelings.

I don't wish to park them all the time. One of the reasons I came in here is because maybe it will help some other parent in a similar position who has lost a teenager. We've got letters from throughout the country from people we don't know who have teenagers playing football, thinking of their own children.

I wouldn't be suppressing my emotions or feelings, quite the opposite. I'm only really a minute away from weeping at any moment now, really. I speak to a lot of people, my friends have been great at listening to me, and I feel that will be great for carrying me through.

Above all, though, a sense of immense loss and love came through in the interview, carried out by Philip Boucher-Hayes.

Brendan Óg Ó Dufaigh's father said that, despite all the greatness of Ógie's sporting exploits, he wasn't perfect - and he wouldn't have it any other way.

Leaving the football a little bit, we recognised that he was energetic, he was good-natured, he was friendly and popular. But, having said that, I wouldn't want to depict him as a saint or an angel, because he certainly wasn't! He could be bold, he could be cheeky - but I suppose I'm happy that we didn't rare an angel.

Brendan Óg Ó Dufaigh will never be forgotten by the GAA community, and his father's powerful interview on RTÉ is a testament to the impact he had on those around him. 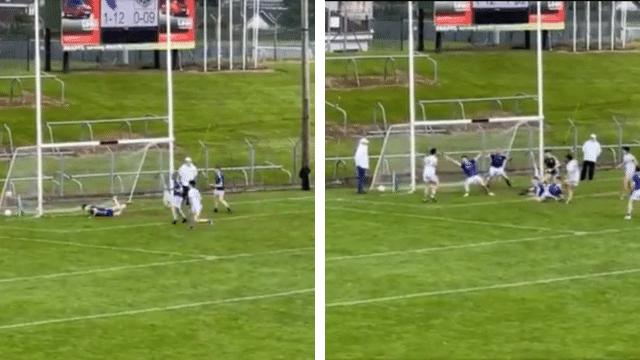 GAA
4 months ago
By Donny Mahoney
Down's Ruairi O'Hare Gives Extraordinary Interview After Grief-Filled Ulster U20 Final
GAA
4 months ago
By Gary Connaughton
Seamus McEnaney Pays Emotional Tribute To Monaghan U20 Captain After Tragic Accident
GAA
4 months ago
By Eoin Harrington
Monaghan In Mourning After U20 Football Captain Killed In Tragic Road Accident
Popular on Balls
Football
3 days ago
By Colman Stanley
Alex Ferguson Names His Greatest Captain, And It's Not His Most Successful Captain
Rugby
3 days ago
By PJ Browne
Trevor Brennan's Sons Played In The Same Top 14 Game At The Weekend
Football
1 day ago
By Gary Connaughton
Frank Lampard Reveals Ruthless Nature Of His Sacking At Chelsea
The Rewind
2 days ago
By Colman Stanley
New On Netflix Ireland: Your Guide To December's New Additions