It's a difficult morning to be waking up as a Mayo supporter. No one really gave them a shot of beating Dublin, but that halftime break would have given their long-suffering supporters just enough time to start dreaming again. It took five minutes for Dublin to trundle all over those dreams, and now like 2013, 2015, 2016 and 2017, Mayo fans are back staring into the chasm of winter, feeling so close and so far from beating Dublin, wondering what they did to deserve this particular fate.

How do we explain that pivotal ten minute stretch where Dublin turned the screw? Was it superior players being superior, as Dublin fans would tell you? Was it superior players flexing muscles underwritten by generous GAA grants and a plethora of corporate sponsorship, as the internet would tell you? Or is there a failing in this Mayo team, something that causes them to flinch when the real pressure inevitably arrives.

Joe Brolly could not let yesterday's capitulation pass without making some comment about Mayo. In his Sunday Independent column today, he goes in hard, as you'd expect from the man who called Mayo celebrity losers. 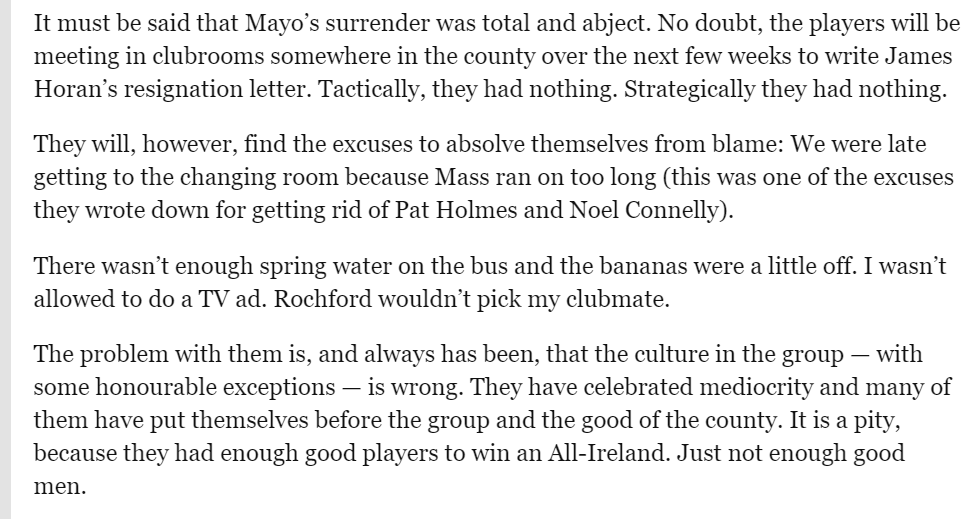 'Just not enough good men'. It's seems the Breaffy core who are the heart of this Mayo team are large in Brolly's thoughts here. If Mayo fans were still reading Brolly, today feels like the last straw. You can't argue with the historical points here but what kind of 'culture' could beat this Dublin team? Tyrone '03? Kerry '78? We're not sold. The truth is Mayo were so far off Dublin in the second half, there's no need for excuses. Con O'Callaghan is his own excuse. Brian Fenton is his own excuse.

If anything, Mayo seem cursed to be the team to play this famous Dublin team the closest. For 35 minutes, Mayo did have a plan. They strangled possession and suffocated Dublin's attack. But when the tidal wave came, they froze. Their kickouts fell apart like their shooting.

James Horan will be able to attest to the quality of his team as 'men' - but we'd actually flip it. Enough good men, not enough great players.