Here, supporters of Mayo football, is a thought which should elicit an approving nod: In an inter-county career which began in 2010, Chris Barrett has never been involved in a more competitive panel.

This year's league has seen the introduction of new tunes to a Mayo playlist which was badly in need of a freshen. There is also an old favourite back in the mix with James Horan's return as manager.

Impactful options off the bench, a factor which was missing for Mayo in those close-run All-Ireland finals against Dublin, are being added. In all, they used 34 players during the league.

"Getting into a squad now is nearly as big as getting into a team," says Barrett ahead of this weekend's Allianz Football League Division 1 final against Kerry.

"Back in the day, maybe you were looking for the first 15 whereas now I think it’s the most competitive squad that I’ve ever been involved in. There’s a real ‘am I in the 26 or not?’ now rather than in the first 15.

"That’s probably down to a load of the younger lads putting their hands up this springtime. Cillian [O'Connor] has been out, Seamie [O'Shea] has been out, there’s chances there for everyone to get involved and they’ve really been pushing us.

"You always need a bit of pressure on your back. I think sometimes, there’s a perception out there that we’re an older team but when you look at the likes of Diarmuid [O'Connor] and Paddy [Durcan] and Stephen Coen, people might think they’ve been around for years but those guys are only 22, 23. They’ve been coming the last few years so it’s the newer batch this year.

"Michael Plunkett, Fionn McDonagh, Fergal Boland has been doing really well. Conor Diskin, Conor Loftus, my own clubmate Eoin O’Donoghue. There is really a good crop of young fellas coming up. It’s great to see and they really are pushing us."

Barrett (whom you can listen to on this week's Three Man Weave podcast) has not noticed anyany ma changes to Horan's approach from that first stint as manager between 2011 and 2014. Horan is as hands-on as he ever was on the training pitch.

James is a confident guy. He can get that into his players as well, is the one thing. He likes to exude confidence. Especially with the younger players, it catches on. There’s an excitement and an enthusiasm in the squad at the moment which is good to see.

He kind of sticks to his guns. James has his opinions on how he wants the game to be played. That's the way he trains and the way he preaches his message to the players.

It's early in the year. I suppose he hasn't revealed his grand master plan yet, maybe.

Mayo finished the league with five wins from seven games with the two defeats - ones which left players and management scratching their heads - coming against Dublin and Galway. 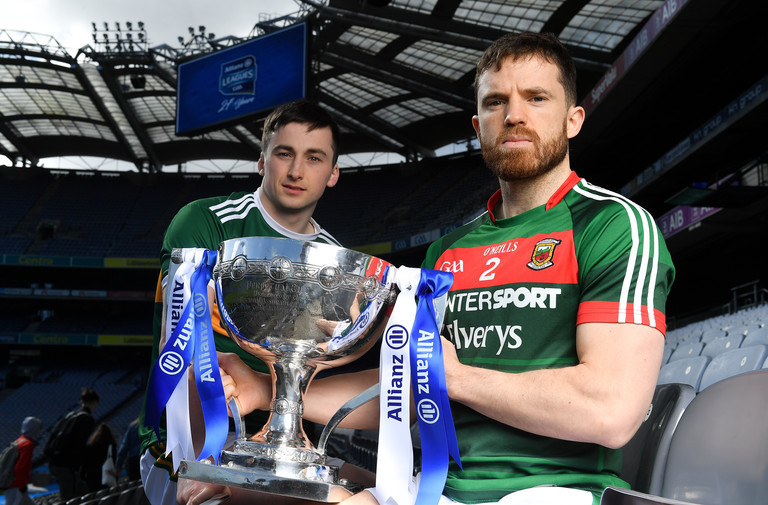 "The Dublin match here [at Croke Park] looking back on it, I don't know what happened us," says Barrett.

"We just were really, really flat on the day. We started the league quite well, three from three, and then just didn't turn up at all here on the day.

"I'd say a lot of the supporters were looking forward to Mayo-Dublin, historically great games and I think both of us didn't turn up. Dublin I don't think played halfway near their potential either. So it was nearly an anomaly for us so we kind of put it behind us fairly quickly.

"The Galway game then was probably more disappointing in that we felt like we could have pushed on at a certain stage in that match and won that. We came back to a point midway through the second-half and probably took our foot off the gas and made a few mistakes. We've learned as we've gone.

"I think we really took learnings from that Galway match. There were some good things we did and some bad things we did. Then we took it into the game against Kerry which was probably our most complete performance yet."

In his inter-county career, there's still plenty of light left in the evening for Chris Barrett. He's only 31 and not 33 as a quick Google search would have you believe.

That need to win an All-Ireland will always be in the back of the mind for Mayo players but as the years go on some realise there's plenty to savour on the journey.

"I think as you get older you actually start to appreciate as well the actual experiences.

"Maybe when I was 25 and 26 and someone asked you what the be all and end all of it was you'd say it would be winning an All-Ireland and retiring without doing that would be a disaster.

"But, looking back on it now as you grow a bit older and wiser, the experiences we've had as a team are phenomenal. Just to have the ability to run out here on Sunday in front of however many thousand people.

"We've been lucky as a Mayo team to get to finals and play on the huge days in Croke Park. When I do hang up my boots, whether there's an All-Ireland or not, obviously I'd prefer if we did, but I wouldn't be looking back with a huge sense of regret. I'd be remembering all the experiences I've had with my teammates."

Above: In attendance at the 2019 Allianz Football League Finals preview are Paul Murphy of Kerry, left, and Chris Barrett of Mayo at Croke Park in Dublin. 2019 marks the 27th year of Allianz’ support of courage on the field of play through its sponsorship of the Allianz Football and Hurling Leagues. Mayo meet Kerry in this Sunday’s Division 1 decider at Croke Park (4pm), while Meath and Donegal will contest the Division 2 Final in Croke Park on Saturday (5pm), preceded by the Division 4 final meeting of Leitrim and Derry (3pm). Photos by Sportsfile