Like a photograph taken in a rush, the final moments of the All-Ireland final replay are a blur for Con O'Callaghan.

Just before referee Conor Lane pursed his lips for the last time, the Dublin forward recalls being thrown to the ground on the sideline by men in green and gold.

"The whistle blew, hands straight in the air, it was just relief and euphoria, and everything coming together. I ran to the middle of the pitch, hugging the lads," says O'Callaghan, the PwC GAA/GPA Player of the Month for August.

"My mom came down as well. My family was just there. It was special to see them straight after the whistle. We came down, got a couple of snaps, yeah it was good. It’s amazing to see them so happy for you and so proud of you. "

The 23-year-old was one of Dublin's key players as they arm-wrestled Kerry into submission following a stalemate first encounter a fortnight earlier.

Getting to that point meant a rejigging of both his routine and the break he and eight other teammates had originally planned for after the September 1st All-Ireland.

"There was nine of us from the team that had a weekend in Berlin booked – a music festival over there," says O'Callaghan.

"Then having to reset, those two or three days after are really tough after the game. You’re a bit low for a couple of days after, but then you regroup together.

"With the sending off and us scraping to get a draw but also having a chance to win, the head was a bit all over the place for a couple of days.

"But after that, we put that behind us on the Wednesday after, set our stall out for the final and to actually do it, come out after a bit of adversity was amazing." 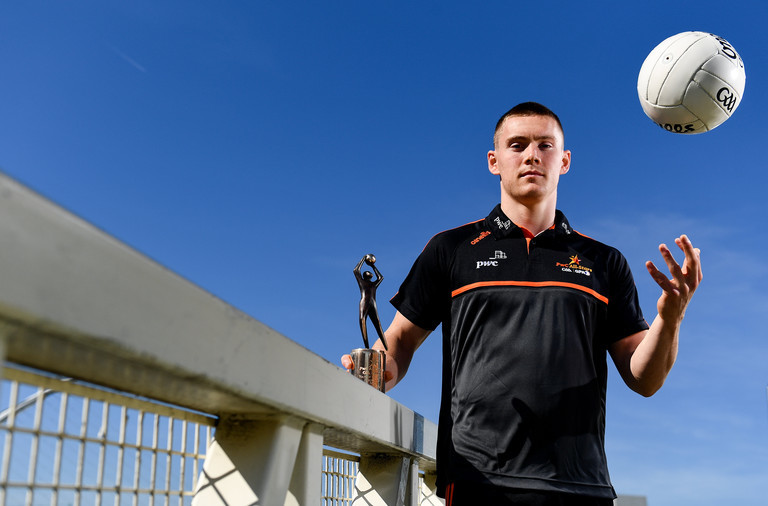 PwC GAA/GPA Player of the Month for August, Con O’Callaghan of Dublin, pictured, at PwC offices in Dublin picking up his award. Photo by Sam Barnes/Sportsfile

"We had to change it up a little bit," he continues.

"I would have felt that if I did the same thing again... if it didn’t work the first day, it won’t work the second day.

O'Callaghan's influence in the replay was far greater than the drawn game. He hit four points - all from play - in the second game compared to just a single in the first.

"I suppose most players weren’t happy with their performance the first day," he says.

"But the second day, I think the game was a lot more open, a lot more expensive. A lot of lads went at it really hard from the start. I think we got 1-17 from play.

"I don’t know was there anything in particular, I think it was just the first day, I was probably just a bit contained inside. I didn’t get enough ball myself, I didn’t get free enough. Just made a conscious effort to get free early and go at my man early.

"In fairness to Kerry, we went 0-5 to 0-1 up and looked like we were going really strong. And they came at us really hard, got into half-time and we were playing some of the best football we played all year, and we were still only drawing. We thought playing that good football that we could have been ahead, but they came back at us so hard.

"Even the second half, when we got the goal and a point we went four points up. Against Mayo we pulled away but Kerry came back at us again and got back to a point.

"During both games, there were moments where you're not questioning yourself but a little bit worried about what could potentially happen.

"It makes it all the more thrilling when it's in those crunch moments that you can rally round each other.

"It makes it more special [to win] when it's a tighter game."

GAA
3 days ago
By Michael McCarthy
Vote: Your Favourite Gaelic Football All-Ireland Final Goal Of The 2000s
Previous Next

GAA
1 day ago
By Balls Team
Reports: Counties Ready To Implement Interesting Measures For Club GAA Return
GAA
1 day ago
By PJ Browne
This 'Gaeltacht XV' Would Be A Formidable Team
GAA
3 days ago
By Michael McCarthy
Vote: Your Favourite Gaelic Football All-Ireland Final Goal Of The 2000s
Popular on Balls
The Rewind
17 hours ago
By Gary Connaughton
The 10 Types Of Irish Men You'll Find During A Heatwave
1