Cork Ladies manager Ephie Fitzgerald was sent off during their Division 1B clash against Waterford after his reaction to what he later labelled as a 'joke' decision.

While Cork would ultimately run out winners on a 2-11 to 2-8 scoreline, much of the post-match conversation revolved around a penalty decision in the first half.

Katie Quirke was through on goal, and after rounding the Waterford goalkeeper, looked to be clearly dragged down by her opponent as she attempted to put the ball into an empty net.

It was as clear a penalty as you are ever likely to see, although referee Austin O'Connell did not agree. He decided against awarding the spot kick after consulting with his umpire.

Watch the clip below and try and make sense of this:

What's more, Cork manager Ephie Fitzgerald would be sent to the stands for his reaction to the decision. He is now facing a ban of up to eight weeks as a result, meaning he could miss his side's upcoming league semi-final.

Speaking on RTÉ's Sunday Sport after the game, Fitzgerald said it was a piece of miscommunication that resulted in his sending off. He also labelled the penalty decision as one of the worst he had ever seen.

I'm in the game a long time and I've seen bad decisions in my time but that's up there with the best of them.

I'm probably looking at eight weeks [suspension] now and the man wouldn't talk to me. If we're not allowed to question referees in a respectful manner then what's the point?

We put so much time and effort into preparing teams and making sure they're right and that they do things right - on and off the pitch - and then officials won't communicate.

I could be looking at getting eight weeks for that which is just mind-boggling - no talking afterwards and I couldn't even reason with the man.

Hopefully sense is seen here and no ban is implemented.

SEE ALSO: There Is A Big Problem At The Heart Of All The Hurling Complaints 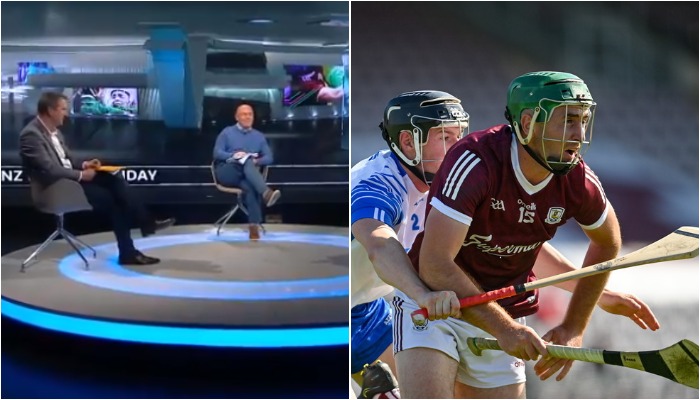