Cork produced the performance of the weekend in the Electric Ireland Minor Hurling Championship, but it wasn't enough to grant them a place in the Munster final.

Last week we argued that the Munster MHC was the most competitive championship in the entire country, where each of the five teams capable of finishing on four points each. It didn't turn out that way, but slightly different results could have given us a completely different final pairing as each county went into last weekend with hopes of making it to the showpiece match.

The Rebels were outsiders to do so, having failed to win since the opening round while conceding eight goals along the way, but blasted their way through Waterford to put them in with a shout. Unfortunately for them, Limerick beat Clare to secure their third win of the season, which happened to be the ideal result for Tipperary.

The Premier County were nervous onlookers having fulfilled their fixtures with destiny out of their hands, but they will be relieved to be playing the Treaty minors on July 1. Cork, Waterford and Clare meanwhile, are now out of the championship. 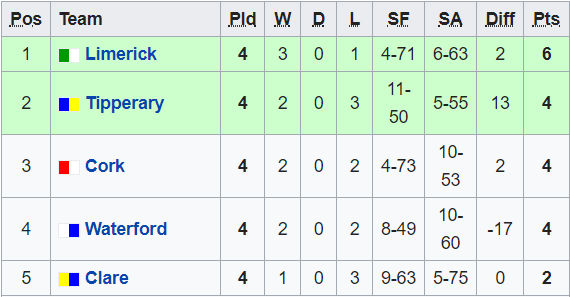 Elsewhere, Kilkenny and Dublin also produced monster wins to book themselves a spot in the Leinster MHC semi-finals, where they will face Offaly and Wexford respectively. The Cats continue to look a step above the rest in the province as they begin to set their sights on the All-Ireland.

Your nominees for player of the week are as follows:

For the second time this year Shane Barrett finds himself nominated for the best player award along with Conor Kelly of Kilkenny, but will his stirring performance against the Déise be enough to beat his adversary on this occasion?

Brilliant performance by our Minors today. Heartbreaking to lose out, but that's sport #GAA https://t.co/OwNS68AVIs

The full-forward was determined to see his Cork team reach a final, scoring 2-2 against a flat Waterford who didn't appear to match their opponent's resolve and conviction to finish in the top two.

Captaining the side once again, his leadership skills were on full show at the weekend, scoring 1-1 in direct response to Waterford's early goal.

A second late on in the match confirmed a 15 point victory for the Rebels, and although it turned out to be a Pyrrhic result, Barrett can be pleased with his contribution to the championship.

The Faithful County never looked like losing to Laois on Saturday, but no player appeared more assured than Cillian Sampson.

Congrats to @Offaly_GAA minors and Eunan Martin on a good win today. Impressed with their work rate and Cillian Sampson excellent with 2-5. His 2nd half goals kept Laois at arms length.

The half-forward scored a creditable 2-5 on the day as Offaly booked themselves a Leinster MHC semi-final meeting with Kilkenny this weekend.

Cathal Kiely also had a fine performance, scoring ten frees to put him six points clear as the top scorer of the championship, but it was Sampson who added the pizzazz to keep Offaly's winning streak intact.

Sampson's first goal came 15 minutes from the end, and he added another in injury-time to cap off a wonderful performance. The Cats will offer a much stronger test than they have faced in Tier 2 this year, but they won't fear anyone so long as their key man is in this kind of form.

If there's one thing that we know for sure from this year's Electric Ireland Leinster MHC, it's that Kilkenny have a future star in the making.

Full Time : A serious second half from the Kilkenny Minors see them advance to the semi-final.

Conor Kelly has the aura of a competitor who belongs at the highest level of the game, yet it's easy to forget that he's still a teenager. Saturday saw a continuation of his fantastic form, scoring 13 points overall in the Cats' demolition of Westmeath.

The forward was typically efficient from set-pieces, popping over four frees and a 65, but he raised the white flag eight times from play, demonstrating his great range of scoring once again.

The Kilkenny minor star could have even added a goal to his tally, hitting the post in the 13th minute, but his teammates more than made up for it with five second-half goals.

Kelly has 42 points after just four games, the second highest tally in the country as the Electric Ireland Leinster MHC moves into the last four, and who would bet against him stealing top spot before the season is out.

Motorsport
16 hours ago
By Michael McCarthy
Watch: Kimi Raikkonen Goes From 16th To 6th In One Brilliant Lap
15