While Mayo's win over Dublin left the entire county on a high on Saturday night, thoughts soon turned to the welfare of Eoin McLaughlin in the aftermath of the game.

The defender was stretchered off the pitch after a nasty shoulder to the face from Dublin's John Small, one which was not punished by the officials at the time.

It later emerged that McLaughlin had suffered a double jaw fracture and would have to undergo surgery. This obviously means he will miss the All-Ireland final.

Referee Conor Lane came in for a huge amount of criticism after the game, with the general consensus being that Small should have received a red card for the challenge. Others were more sympathetic to the referee, believing that the challenge looked like a fair shoulder at the time.

Darran O'Sullivan believes that this is part of the issue.

A shoulder to shoulder tackle is usually deemed as fair in the GAA, regardless of the circumstances around the challenge. This can often lead to players being badly hurt even if the tackle is within the rules. It something many would like to see taken out of the game.

Speaking on this week's GAA Embedded, O'Sullivan said that inter-county players are simply too big and strong to allow blind shoulders to the opponent such as this one to be part of the sport.

My personal opinion is that fellas have gotten so strong and are so physical now, that I don't think that type of shoulder should be allowed.

Someone else might say 'you're taking the physicality out of it', keep the physicality, that's fine. But if you're hitting a fella like that blind, and you get it wrong or are a couple of inches bigger and connect (with the head), you have a serious injury.

A broken jaw is a serious injury, but look (Eoin McLaughlin) will get over it. It could be way worse than that.

My personal opinion is that if someone can't see you and you're lining him up, and John Small is a big guy, if he hits you blind I don't care if he only hits you in the shoulder. You're in trouble, you're getting hurt.

It's too dangerous. Fellas are too strong, they are machines now, they're all in the gym. It's like being in a car crash that you can't see coming.

Personally I think it should be gone. As a defender there is no reason why you can't be there to stand him up or whatever.

It's too dangerous. If you're off by a fraction, a bit late or early or too high, it's too serious of an injury.

In the speed of a game it looked like a shoulder, but I think it's a bigger issue than that. That whole lining a fella up, you can't do it in rugby.

There is no problem with physicality, but with the angle they were going at there was no way he could have hit him shoulder to shoulder, there was always a chance he would hit him in the face.

You have to nip that in the bud...

I love the big hits, but fellas are too strong. You even see it in the club game, lads are in the gym and especially during lockdown lads got big and strong.

Everyone wants the big hit and it's a recipe for disaster...

In recent years, number of sports have taken more stringent measures to ensure the safety of players, especially in relation to potential head injuries.

The GAA seem to be somewhat behind in this regard, with the face that John Small went completely unpunished for this incident some strong evidence of that.

While nobody wants to take the physicality away from the GAA, there does come a point when players welfare must take precedence. 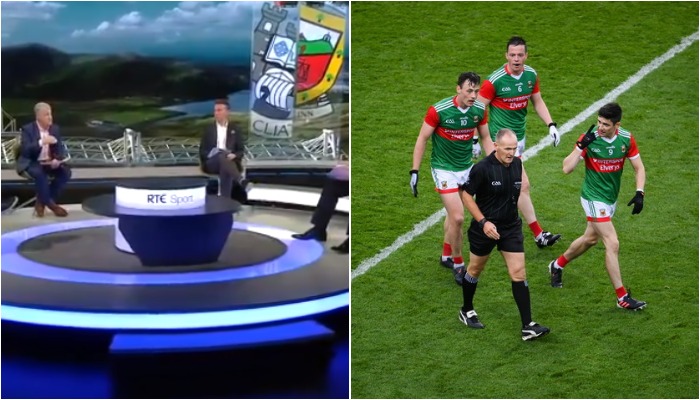