Davy Fitzgerald Calls On Government To Up Attendances At GAA Matches

The Leinster semi-final between Kilkenny and Wexford was a fantastic watch. It was one of the best hurling matches you are ever likely to see, with both sides producing some incredible moments over the 90 minutes (including extra time) of action.

It is probably no coincidence that this was accompanied by the return of supporters to stadiums. While we are well off seeing a full Croke Park, 8,000 spectators at GAA headquarters is a step in the right direction.

Wexford manager Davy Fitzgerald is hoping we can see more people in the ground sooner rather than later.

Speaking to the Irish Examiner after the game, he called on the Government to allow more people into stadiums over the remainder of the summer.

The size of Croke Park is more than able to cope for 8,000 safely. Out in the open, we all know transmission won't happen too freely. We need to really have a look at [crowd sizes].

I would urge the Government to let people out and about in the fresh air. I think Croke Park can do it, I think other stadiums can do it. Even the people there today, they were on the edge of their seats.

My own personal view is I'd love to see it open up a small bit. I don't think we'll get back anything full for a while, but we could maybe go a small bit more. The GAA isn't anything without the supporter.

We need the supporter there. The difference between last year's championship and what we played out there, it is massive.

There are a number of test events taking place around the country at the moment as the authorities seek out a safe way to bring back large scale events in this country.

Considering the crowds we have seen on the continent at Euro 2020 in recent weeks, you would be hoping that we will see a sizeable attendance in Croke Park come the business end of the championship. 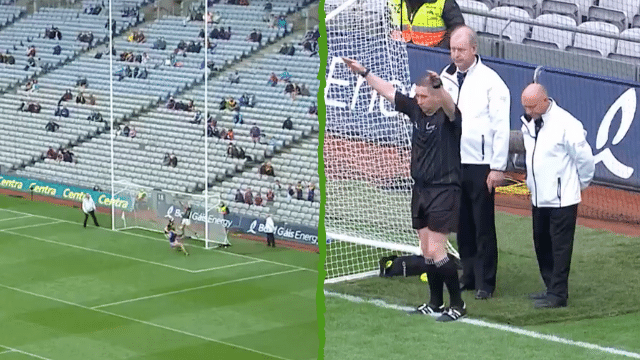 GAA
1 week ago
By PJ Browne
Davy Fitzgerald Pours Cold Water On Galway Rumours
Hurling
1 month ago
By Gary Connaughton
Davy Fitzgerald Is Unsure Of Inter-County Future After Wexford Exit
GAA
2 months ago
By Gary Connaughton
Paul Galvin Has Gone In On Davy Fitzgerald For Comments After Clare Loss
Popular on Balls
Football
17 hours ago
By Eoin Harrington
Watch: Caoimhín Kelleher Penalty Save Helps Liverpool Through To EFL Cup Fourth Round
Football
20 hours ago
By Jonathan Byrne
The Battle Of Old Trafford: Roy Keane On Why Arsenal 'Crossed That Line'
Football
22 hours ago
By Andrew Dempsey
Shay Given Reveals 'Horrendous' Contract Offer That Forced His Celtic Departure