"Absolutely delighted. That can go along with my U12 Most Improved Player of the Year award for soccer," jokes Diarmuid O'Keeffe with a beaming smile.

The Wexford midfielder has just been named PwC GAA/GPA Hurler of the Month for June after starring in his side's run to the Leinster final and their subsequent victory over Kilkenny in the decider.

The win claimed Wexford's first Leinster title since 2004. A 12-year-old O'Keeffe was in attendance that day when they beat Offaly by four points.

"I was sitting in the Hogan Stand," says the St Annes man.

"Darragh Ryan and Doc (David) O'Connor, two club mates of mine were playing on the day. They beat Kilkenny in the semi-final and Offaly in the final so I remember it well."

O'Keeffe is now in his seventh season with the Wexford senior hurlers.

"I think it’s up there with the last couple of seasons," he says of his current form.

"When you come into the squad first you’re really finding your feet and trying to learn your trade so to speak.

"I’ve moved positions in the last two years with Davy [Fitzgerald], I was wing back and now I’m middle of the field." 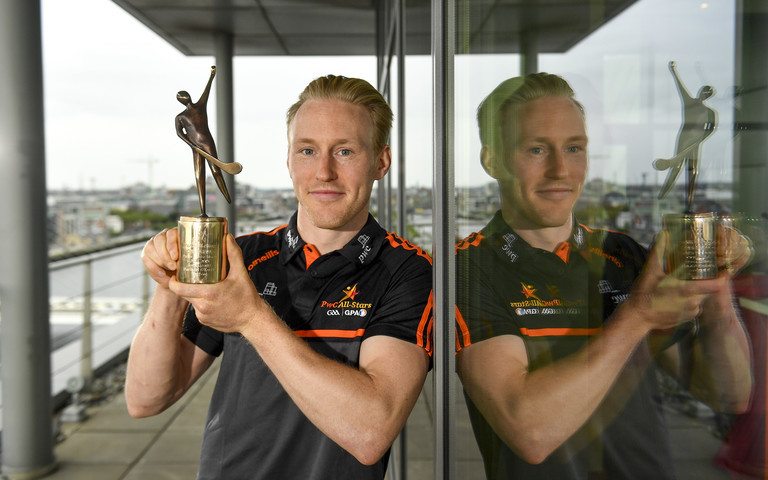 The PwC GAA/GPA Players of the Month for June, footballer Jamie Brennan of Donegal, and hurler, Diarmuid O’Keeffe of Wexford, were at PwC offices in Dublin today to pick up their respective awards. Photo by Sam Barnes/Sportsfile

It's the line you expect to hear from every player - that they don't mind where they play as long as they're in the starting team - but it's also the one he gives to work colleagues when they are no dictaphones pointed in his direction.

"I think there’s probably a cohort of 10 or 11 lads that are consistently there over the last couple of years," says O'Keeffe, "the Lee Chins, the Matthew O’Hanlons, the Paul Morris's, the Mark Fannings, and really any one of the lads can end up in any position, whether it be the forward line or the backs.

I’m pushing on now, I’m 27 and the years are adding up, maybe I’m getting more mature on the field alright, but more childish in the dressing room perhaps.

O'Keeffe works as a teacher in Dunboyne and is based in Dublin during the school year. The summer here, he's now down home in Wexford.

"Every conversation you have is about hurling," he says.

"It's largely down to the fact that it's been 15 years since we won a Leinster Championship."

The party following last month's win spilt into the following week. Manager Davy Fitzgerald was good enough to allow his players to also have Tuesday to celebrate before returning to training on Thursday.

"The scenes in Gorey were something unreal," says O'Keeffe.

"Everyone was out on the street. The main street on Gorey is 700m or 800m long and it possibly took us an hour to get through it. It was just crazy.

"We went through Ferns and Enniscorthy, Oilgate as well - it was probably a little bit later in the night so it was a bit quieter but there was still plenty of people out.

"It was great to be part of it.

"Some of the younger guys like Conor McDonald and Rory [O'Connor] would have Leinster U21 medals but the likes of us haven't any medals to show for it," he says.

"When you don't win something for so long and then you do get a bit of silverware, it important to enjoy it."

GAA
9 months ago
By PJ Browne
'I Love Speed. Liam Challenged Me To Bring Some Element Of That To The Team'
Previous Next

Olympics
3 months ago
By Sean Meehan
Provinces Are Split On What Sporting Event They'll Miss Most This Year
GAA
3 months ago
By PJ Browne
Quiz: Name The All-Ireland Hurling Finals Man Of The Match 2010 - 2019
GAA
9 months ago
By PJ Browne
'I Love Speed. Liam Challenged Me To Bring Some Element Of That To The Team'
Popular on Balls
Football
15 hours ago
By Gary Connaughton
James McClean Questions Level Of Support From Irish Teammates Over Abuse He Suffers
2