Meath have pulled off a monumental shock in this afternoon's All-Ireland Ladies Football final, defeating Dublin on a scoreline of 1-11 to 0-12.

It was a game that very few gave Meath a chance of winning, having only come up from the intermediate ranks in 2020. What's more, they were facing a Dublin side who were on a quest for a fifth consecutive All-Ireland title.

Despite this, it was to be Meath's day.

They led from the very start of the game, with Emma Duggan's goal in the first half proving to be a huge moment in deciding the result.

It was a remarkable chipped effort from a botched Dublin kick-out, although there was some debate as to whether the forward was attempting to go for goal.

Massive goal for Meath against Dublin in the All-Ireland final.

With two points in it at the end, the goal was the winning of the game. The Meath woman also said there was no doubt she meant it.

Speaking to Jerome Quinn after the game, Duggan said that she was attempting to chip the goalkeeper, with Meath having targeted Dublin's kick-outs before the game.

'I don’t think a single person in the country believed we could do it today!' - see an emotional Emma Duggan at the final whistle talking about THAT GOAL and the incredible noise from @meathladiesMLGF fans in Croke Park.. @LadiesFootball @SportTG4 @ballsdotie @GAA__JOE @The42GAA pic.twitter.com/e9bBZbbY7V

I have no idea (how we did it). We put in absolutely everything. I'm lost for words, I don't know what to say...

Goal of course! Our main job today was to turn over the kick-outs and punish them for it. We don't think that Dublin were really challenged on their kick-outs this year.

I suppose when she was off her line, goals were going to win games today...

I have never been involved in something like this before. It's like noise I have never heard. The atmosphere was absolutely unbelievable.

When we were turning over balls and getting scores, it just drove us on and gave us a new pair of legs at the end. 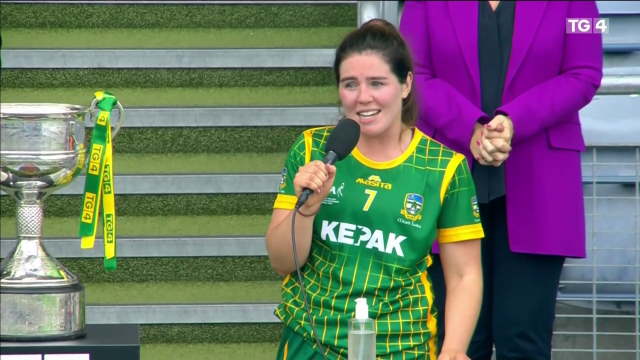