No sport loves messing with its rules more than the GAA. It seems that every years brings with it a number of new rules on either a trial or permanent basis.

Gaelic football has certainly borne the brunt of that more so, but hurling has had a couple of major changes for 2021.

Not only has the new interpretation of the advantage rule often resulted in some very stop-start games, but the sin-bin law has also caused plenty of controversy in recent weeks.

It is clear that something did need to be done to combat cynical play in hurling, with more incidents of clear foul play emerging over the last few years.

The same black card that has long been used in Gaelic football was suggested, but in the end of the sin-bin/penalty rule was introduced instead.

Essentially, a cynical foul that denies a goalscoring opportunity will now result in penalty being awarded to the opposition, as well as a ten minute sin-binning for the offending player.

It is an okay rule in principle, but the application of it has often left something to be desired. That is largely down to the fact that it is left down to interpretation of the referee to decide when it should be applied.

We were provided with the perfect example this afternoon, with James Owens believing this to be a qualifying offence despite the foul taking place near the sideline and a number of Clare players being in a covering position.

How in the name of all that is holy is that a penalty and a sin binning? pic.twitter.com/wFkqWBtwwR

Unsurprisingly, many associated with sport were not happy to see the rule used in such a manner.

In fact, many former inter-county hurlers seemed very frustrated because of it.

Ex-Limerick star Shane Dowling was amongst that bunch.

That is the greatest crock of shit I have ever seen!! It is not why the rule was brought in!!

As was Clare man Brendan Bugler.

8 point swing in 10 mins due to one of worst decisions I have ever seen in a game.

It wasn’t a clear cut goal scoring opportunity, nor was Corks last night. End of

The incident mentioned above came in last night's Munster SHC semi-final between Cork and Limerick, where Cork were awarded another controversial penalty after Conor Cahalane was fouled by Peter Casey.

Referee Paul O’Dwyer adjudged it to be a sin-bin offence a decision many didi not agree with. Nicky Quaid would go on to save Patrick Horgan's resulting penalty.

Unlike in last night's game, Clare's sin-binning would have a huge impact on the result. They were outscored by 2-4 to 0-2 while Aidan McCarthy was off the pitch, turning a three-point advantage into a five-point deficit. They would ultimately lose by four points.

Another former Clare player, Colin Ryan, also couldn't believe his county had been punished for the offence.

Absolute bullshit, he is on the sideline😡

Tipp were good and took massive advantage when Clare a man down but feel so sorry for Clare today... its fair disheartening when a game hinges on a terrible interpretation of a terrible rule. Ref 🤬

Kilkenny native Paul Murphy said the game was ruined by the decision, something Galway's James Skehill agreed with.

Tipp are looking strong and have lots of options off the bench but Clare can feel extremely hard done by! A penalty against them that was never a penalty, played for ten minutes down a man, not awarded another penalty in their favour and still only lost by 4! A great game ruined!

See contrast in refereeing between today and yesterday.... Exact instance of how a ludicrous decision can impact a team/game/spectacle.

How is that not a penalty. For [email protected] sake. Clare down 5 points - penalty decisions both wrong = 6 point swing.

In all, Jackie Tyrrell probably summed it up best with this simple tweet.

Hopefully we won't be forced to have this debate too often over the remainder of the summer. 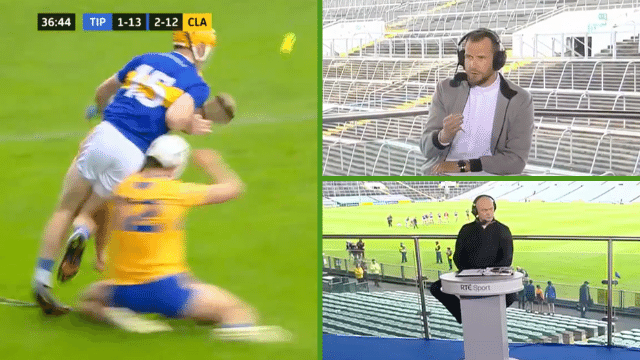 GAA
1 day ago
By PJ Browne
Two Football And Two Hurling Games On TV This Weekend
GAA
1 day ago
By PJ Browne
Can You Get 11/11 In Our Quiz Of The Gaelic Games Weekend?
GAA
6 days ago
By PJ Browne
Will O'Donoghue Happy To See Limerick Club Players Lining Out With Kerry
Popular on Balls
Hurling
1 week ago
By Balls Team
A Tribute To GAA Players Who Looked Significantly Older Than Their Age
Rugby
2 days ago
By Colman Stanley
The Fascinating Journeys Of The 2012 Ireland's U20 Rugby Team
Football
1 day ago
By Gary Connaughton
Some Pundits Are Revelling In Rafael Benitez's Everton Sacking
32