Cristiano Ronaldo’s return to Manchester United has really captured the imagination of Manchester United  fans worldwide and one Gaelic footballer from Ferbane recently paid his own special tribute to the Portuguese star - by copying his trademark celebration.

Muted goal celebrations are the norm in the GAA but when Jack Clancy finished neatly to give his side a six-point lead over Edenderry in the quarter-final of the Offaly SFC, he took to the air spinning like CR7.

This goal should have been revoked 🤮🤮 pic.twitter.com/0kKV41mAZo

It was a 9/10 for execution by the former Offaly U21 player, although introducing a soccer celebration (especially the Ronaldo celebration) to Gaelic games is sure to irk the traditionalists (and non-Manchester United supporters).

It is unclear from the video footage if Clancy let out the customary “siuuu” upon his landing. If he did, he certainly didn’t elicit the same kind of crowd participation as Ronaldo often does. Home fans usually join the United legend in shouting “siuuu”, which can produce a tremendous noise around the stadium.

The Ferbane footballer isn’t the first person to publicly imitate the Ronaldo celebration in recent weeks. In the aftermath of Aston Villa’s recent victory over Manchester United, footage emerged of Villa supporters taking turns to sarcastically copy the move while gathered outside Old Trafford.

Earlier this month, Andros Townsend also “did a Ronaldo” when he scored for Everton against United. He later explained that he mimicked the celebration as a tribute to his illustrious opponent.

"He's my idol. I grew up watching Ronaldo, I spent hours on the training pitch trying to execute his techniques.

"Maybe should have spent longer on the celebration because it wasn't great!" 😂

Andros Townsend says it was a honour to share the field with CR7.

Whatever about the celebration, Clancy’s goal proved crucial as 2019 champions Ferbane sealed a comeback victory to tee up a semi-final clash with Tullamore. Defending champions Rhode will take on Durrow in the other semi-final.

Who knows if Clancy will repeat the Ronaldo celebration the next time he finds the target. Perhaps the Ferbane faithful will be better prepared to join in if he does.

SEE ALSO: Irish Star Of 'The Chase' Reveals GAA Club Helped Get Him On Quiz Show 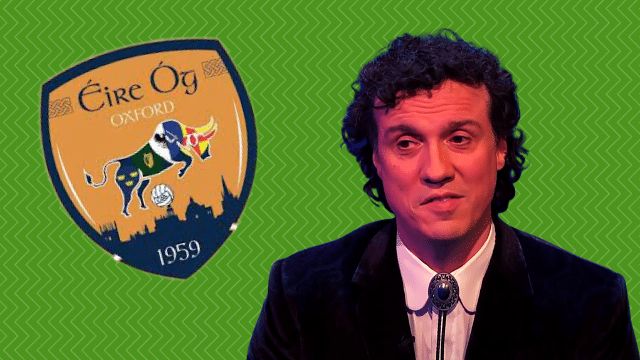 GAA
1 hour ago
By Eoin Harrington
Naas Reach Kildare County Final Just A Week After Unorthodox Manager Change
GAA
3 days ago
By PJ Browne
'A Pure Humble Thing To Say. I Thought, 'Tommy, You're More Than That'
GAA
3 days ago
By PJ Browne
Meath GAA And LGFA Announce 'Monumental' County Finals Day
Popular on Balls
Football
22 hours ago
By Gary Connaughton
Mohamed Salah Confirms That He Wants To End His Career At Liverpool
26