Yesterday's Allianz League tie between Mayo and Tyrone provided serval flashpoints. Lee Keegan's afternoon was prematurely ended after a thunderous Padraig McNulty hit that saw the Tyrone midfielder sent off while Hugh Pat Mc Geary was also taken off after a similarly big hit by Colm Boyle. Boyle was also sent off for two bookable offences.

However, it was a separate matter that had viewers of last night's Allianz League Sunday programme bewildered. Just prior to half-time, Andy Moran was given a black card after remonstrating with the referee. It appeared as if Moran made contact with Maurice Deegan in the process of doing so. 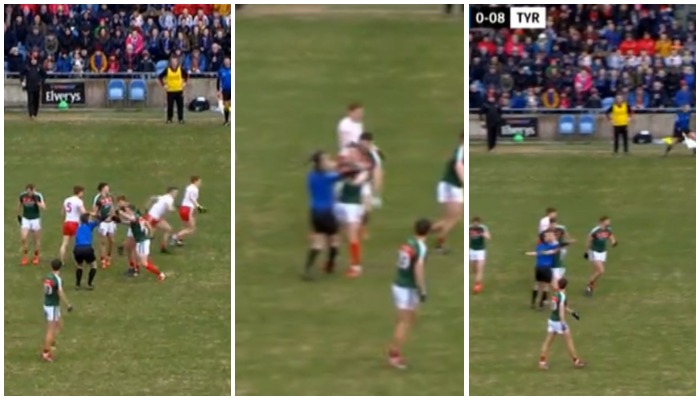 As many viewers were keen to point out, this seemed in direct contrast with Spillane's comments on the Diarmuid Connolly saga last year.

In case you missed the panel discussion on the Dairmuid Connolly incident from the weekend, you can watch it here. #RTEGAA pic.twitter.com/HROyQm8Bny

Bottom line it is rule five minor physical interference it carries a penalty of twelve weeks.

Pat Spillane not so passionate when it comes to Andy Moran about the repercussions of contact with an official... if theres any consistency at all surely moran will acquire a ban for that! #AllianzLeagueSunday #TheSundayGame

Moran did not complain at his booking and immediately shook Maurice Deegan's hand before leaving the field.

Spillane did reference his comments on Connolly later in the show, when he took a similarly sympathetic view of Jason Sherlock's involvement in a sideline melee during the Galway vs Dublin draw. After the ball went out of play, Sherlock shouldered Galway's Barry McHugh in the back. 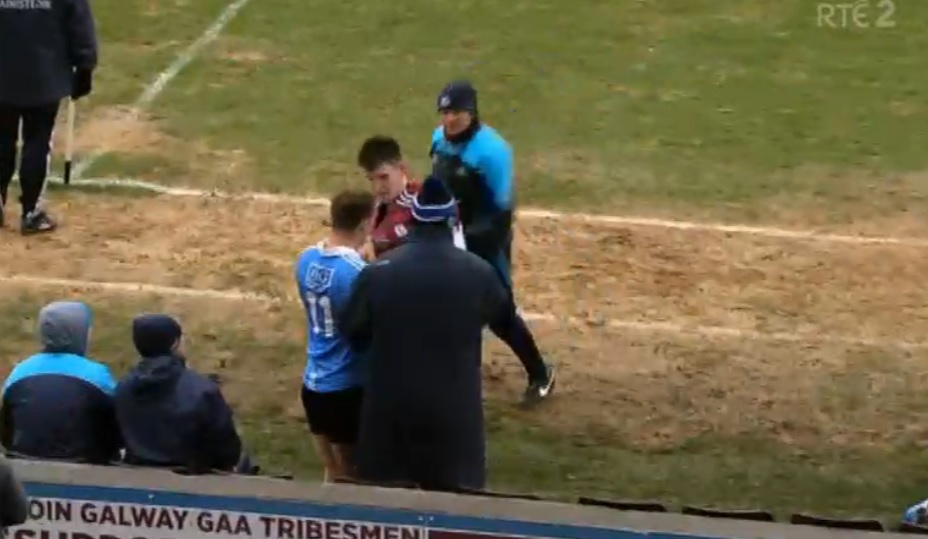 As you know Michael I don't usually comment on any incidents on the sideline involving Dublin officials or players. Last time I did comment I got in a lot of trouble but I will say this, I think there was nothing in it. I think Jason was trying to stop a row, he was the peacekeeper.

Pat Spillane described Jason Sherlock as "the peacekeeper" for that in from behind shoulder into a Galway player's back today on the sideline. Says he was "just trying to stop a row". That's an interesting view on it.

GAA
3 years ago
By Evan Coughlan
Watch: Cracking Conor Boylan Goal Helps Limerick See Off Laois
GAA
3 years ago
By Michael Mulkerrins
The Damning Stat That Shows How Clare's Defence Is Killing Them
GAA
4 years ago
By Maurice Brosnan
Opinion: Donegal's Positivity Punished As Cynicism Now Part Of The Game
Previous Next

GAA
3 years ago
By Evan Coughlan
Watch: Cracking Conor Boylan Goal Helps Limerick See Off Laois
GAA
3 years ago
By Michael Mulkerrins
The Damning Stat That Shows How Clare's Defence Is Killing Them
GAA
4 years ago
By Maurice Brosnan
Opinion: Donegal's Positivity Punished As Cynicism Now Part Of The Game
Popular on Balls
Football
11 hours ago
By Luke Delaney
Obafemi In As Stephen Kenny Names 27-Man Nations League Squad
GAA
3 days ago
By PJ Browne
Controversy In All-Ireland U20 Hurling Final Over Dubious Crucial Point
GAA
1 day ago
By PJ Browne
How A Kerry Guard Ended Up Playing For The Tipperary Footballers
Football
15 hours ago
By Donny Mahoney
Rafa Benitez On The Utter Chaos Around The Steve Finnan Substitution In Istanbul