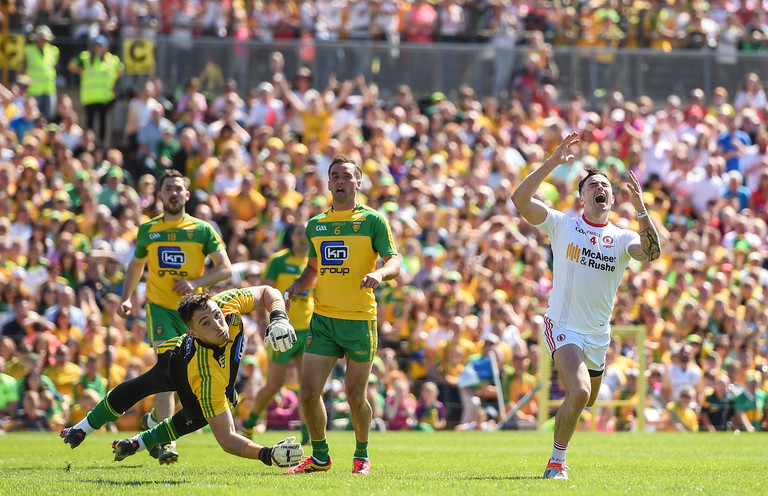 Another Championship weekend lies ahead, so if you're wondering what GAA is on TV, read on!

What GAA is on TV this weekend?

Meath and Kildare will both bid this weekend for a spot in the Leinster final. The last time these two teams met was the opening weekend of Division 2 in the League.

It was a convincing win for Kildare, 3-17 to 16 points. So, Kildare are slight favourites going into this match. The throw in is at 7pm and coverage, which starts at 6pm, will be on Sky Sports 5.

Tyrone and Donegal clashed in last year's Ulster Final, with Tyrone winning the Anglo-Celt Cup. This weekend, the Red Hand county are looking to defend their crown. The winners of this match will meet either Down or Monaghan in the Ulster Final.

This is will most likely be a tough and intense match between the two sides, but Tyrone go in as slight favourites. Rory Gallagher has a new and young team playing for him this year, but they have proved themselves with strong performances in the Division One of the League and a strong win over Antrim in the quarter-finals.

Almost too close to call.

The match will be shown on the Sunday Game on RTÉ 2. Throw in is at with coverage starting at at 1:10pm.

Waterford and Cork are both looking a place in the Munster final this weekend.

Last year, Waterford lost the final to Tipperary, and Cork haven't been in the Munster decider since 2014. The Rebels managed to defeat defending champions Tipperary in this year's quarter-final.

Unfortunately for Cork though, forward Conor Lehane has been ruled out after sustaining an ankle injury. This is a huge loss for the Rebels, Lehane scored ten points in their quarter final victory.

Throw-in is at 4pm and coverage start on RTÉ 2 straight after the Tyrone v Donegal match.

That's all the GAA that will be shown in TV this weekend. Keep up to date and follow Balls.ie, we'll be right over it and updates and reports.

Be sure to check out our brand new GAA show Talking Points, on Monday at lunchtime, which will be reviewing all the action from this weekend.

GAA
4 years ago
By Cian Roche
'It Can Be Very Frustrating... That's Probably Why We Went So Mental'
GAA
4 years ago
By Mikey Traynor
Watch: 2 Goals In 2 Minutes Lift Mayo To Hard-Fought Win Over Clare
GAA
4 years ago
By David Kent
The Sunday Game Can't Agree What To Do With Restructuring The Championship
Popular on Balls
Football
1 day ago
By Eoin Harrington
'Ronaldo Is A Cod' - Remembering Eamon Dunphy's Infamous 2008 Rant
GAA
17 hours ago
By PJ Browne
The Draw Has Been Made For Tailteann Cup Opening Rounds
GAA
1 day ago
By PJ Browne
Donal Óg Cusack Defends Dublin Hurlers After John Mullane Criticism
The Rewind
2 days ago
By Eoin Harrington
Watch: Brilliant Dermot Morgan Dublin Segment From 'The Travel Show' Resurfaces