On a mild summer's day in Croke Park, Jim McGuinness sprung a trap which dramatically, if momentarily, felled the Dublin juggernaut. The All-Ireland semi-final shock of the ages. It was determined and decisive. A counter-attack masterclass, as Dublin repeatedly failed to complete chances and were turned over.

Dublin tried to attack. A mobile Donegal defence won the ball back, drove forward and made hay.

As Donegal star Eamonn McGee told Balls.ie, the ramifications of that day were not immediately apparent.

We knew when the final whistle went we had done something amazing but in term of the years ahead, no. We just focused on that one game. We knew the task ahead was massive but not what would happen afterwards and that Dublin would evolve into something better and far harder to beat.

Since then it has been widely argued that the entire sport of Gaelic football has evolved. The Donegal model is no longer viable because teams don't cough up those turnovers anymore. Scores come from primary possession: sidelines, kick-outs, build-up play. Elite teams are no longer as naive. 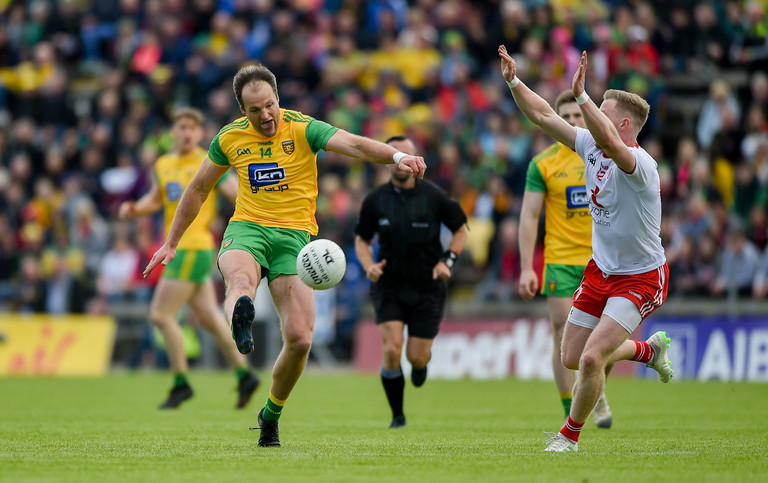 A routine roar at GAA fields around the country: "A wide is as good as a score!" When is that true? Dublin's error in 2014 was wastefulness in the final third, not only missing chances but giving Donegal a platform to attack.

The damage is two-fold. You fail to complete an opportunity, while simultaneously leaving your defence unstructured or exposed and allowing the opposition counter-attack.

It changed the game because everyone changed with it, until Armagh and Tyrone made the exact same mistake.

Any elite-level team in the country is well familiar with 'the scoring zone'. The recent onslaught of analytics and sports science has resulted in an obsession with conversion rates and efficiency.

This has caused sides to be more considerate with their shot selection. Dublin are the classic case, a ruthless finishing side who are structurally efficient in attack and almost adverse to risk.

This is precisely why Armagh and Tyrone's error was so costly.

A long ball in is caught by Mattie Donnelly, Donegal swarm and he collides with Cathal McShane. 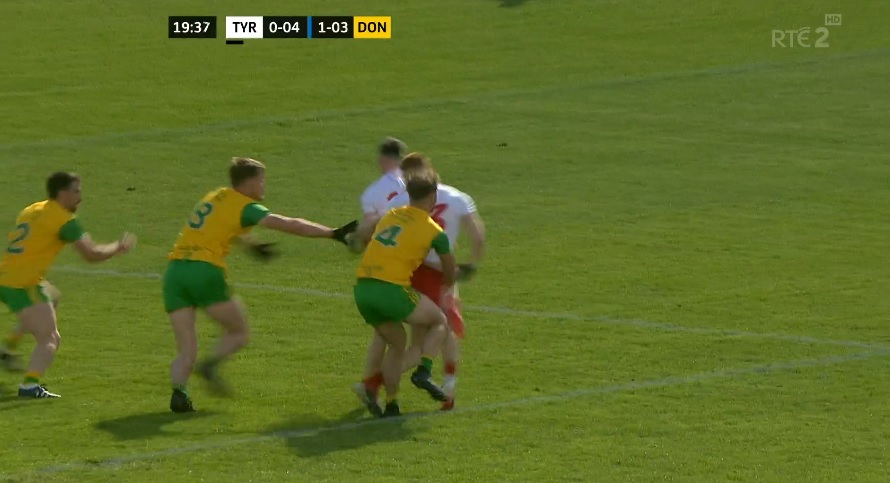 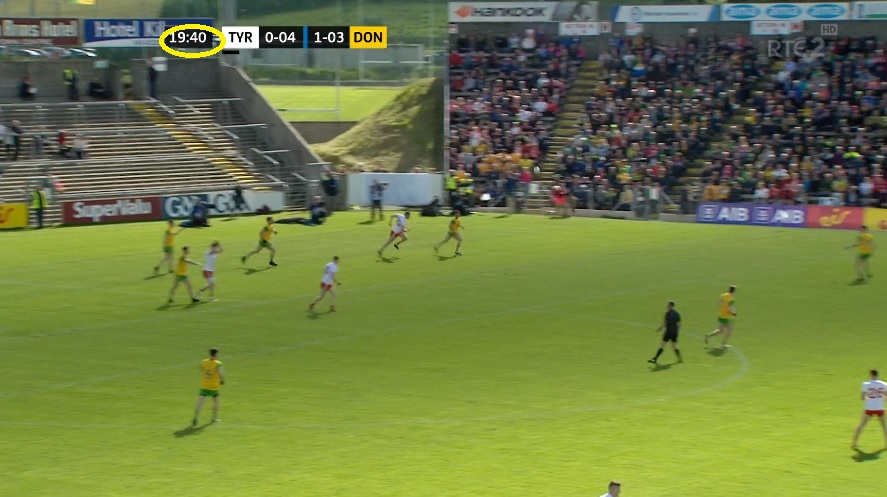 Eoghan Ban Gallagher breaks forward and passes off to Michael Langan, who feeds Michael Murphy. Within twenty seconds without a single kick pass, Murphy gets a shot off and scores. 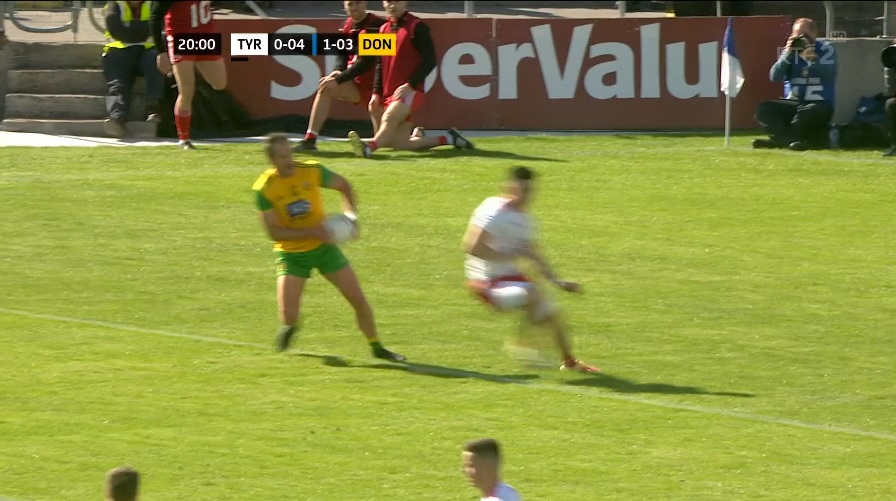 A great attacking opportunity does not produce a score and actually finishes with Tyrone conceding.

Come the final whistle on Saturday, Tyrone had registered 15 scores. Just two came from a turnover during a Donegal attack.

In stark contrast, six of Donegal's sixteen scores came from such a scenario. That's 13% versus 37.5%. Declan Bonner's side had a steady stream of primary possession thanks to Shaun Patton's kick-outs. Tyrone added fuel to the fire by gifting it back to them.

They made more than one error, but the system wasn't one of them.

Their first mistake was entrusting Kieran McGeary with Jamie Brennan and a failure to react when it clearly wasn't working. Within twenty minutes, Brennan had 1-2, a goal chance and was fouled for Michael Murphy's first pointed free. 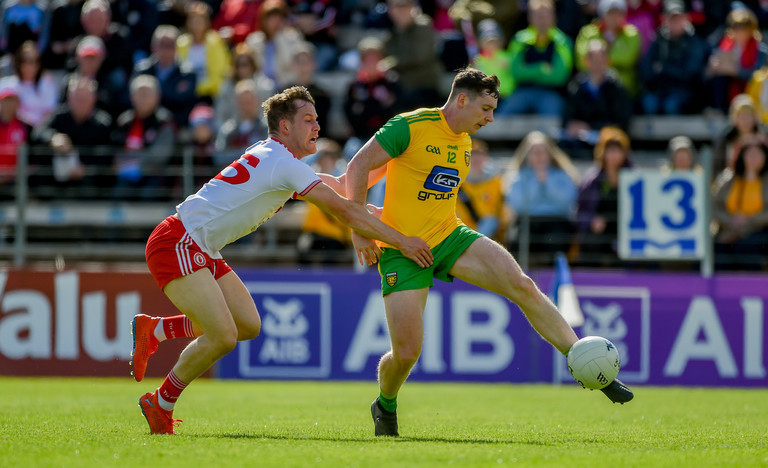 Mickey Harte is a highly detailed-orientated manager. He recognised a lack of man-markers within his team so reinforced the defence with sweepers. That's a system that will result in some success but it won't win an All-Ireland. So he tried to evolve.

That's where the second problem comes into play. A defence will be looser without sweepers in front of it. To cough up possession so easily when attacking is criminal.

Similarly, Armagh made this mistake time and again. Of 23 Cavan scores, 11 came after an Armagh attack gave away possession. On the other hand, it was just four of Armagh's 17. That's 48% versus 29%.

It's important to note here that a team will score in a game; that is obvious. Primary possesions should end in a score. Instead of fixating on kick-out success rate, one should prioritise conversion of scores from kick-outs.

However, it is a fatal error to hand another team possession and gift them a platform to attack. On top of a 10 v 3 wide count, Armagh did this continuously.

There are two better options here. Take the shot earlier or pop the ball inside to the free man. Instead, a shot is taken under pressure and blocked down.

The ball breaks and is collected by Niall Murray on the edge of his D. 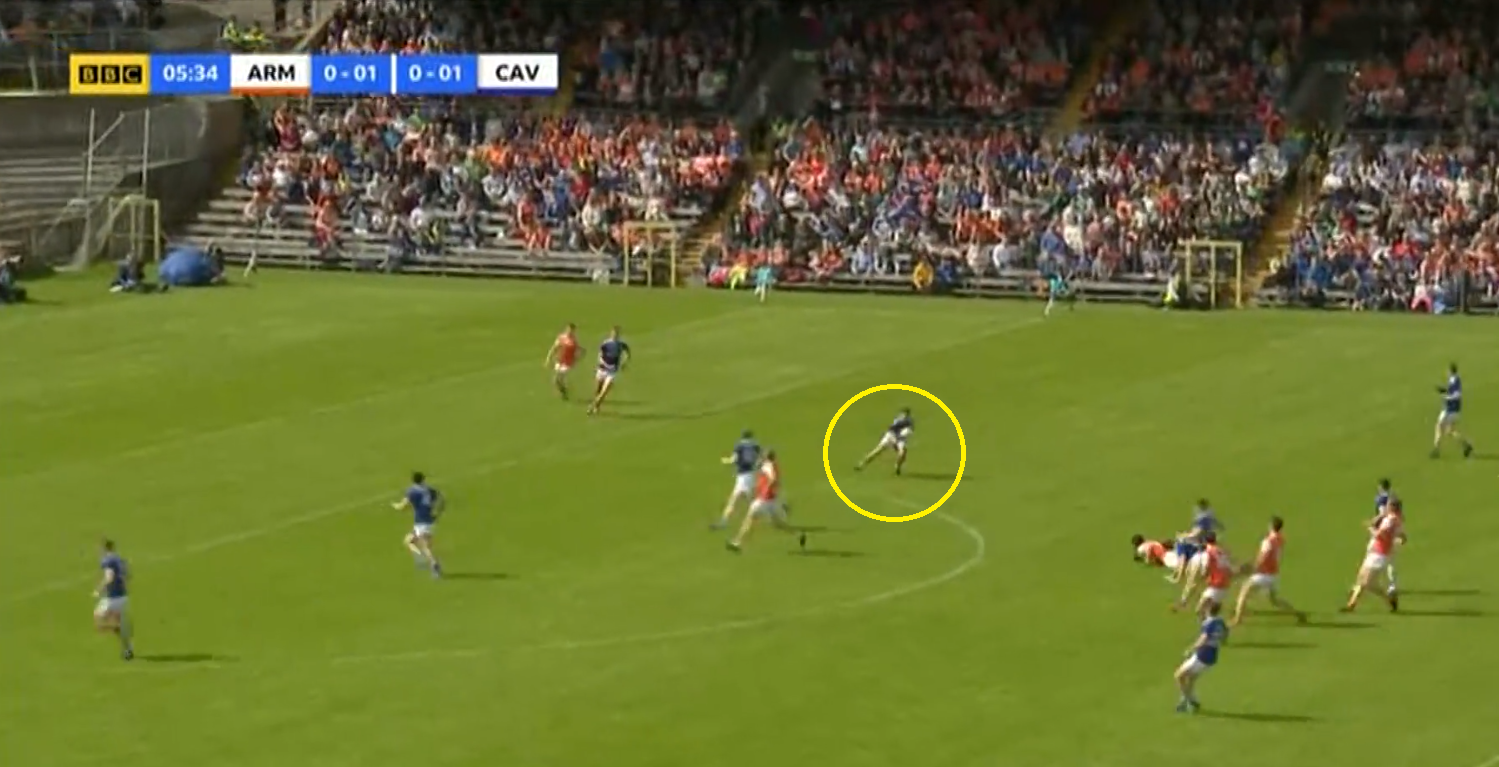 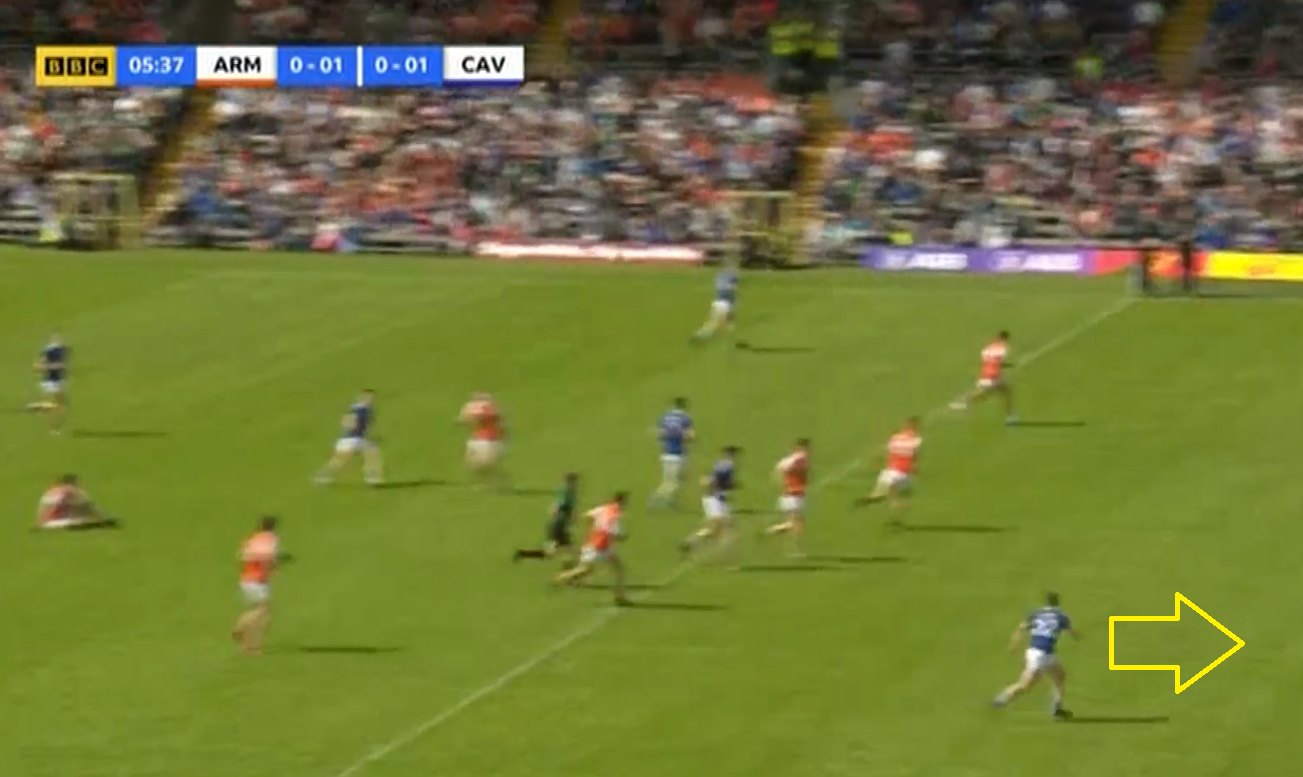 Pierson carries and feeds Gearoid McKiernan on the '45. 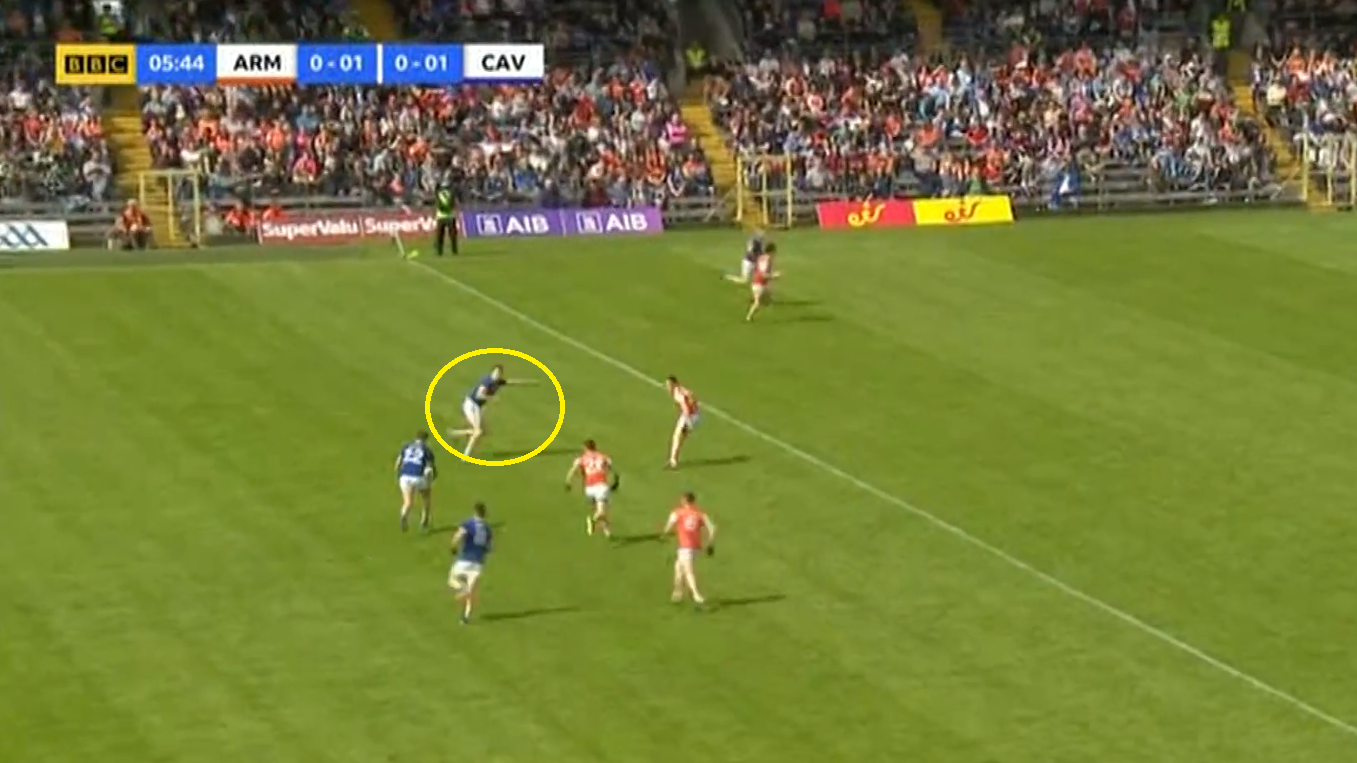 Just ten seconds after he caught the break and delivered a kick pass, Murray comes storming off McKiernan's shoulder. 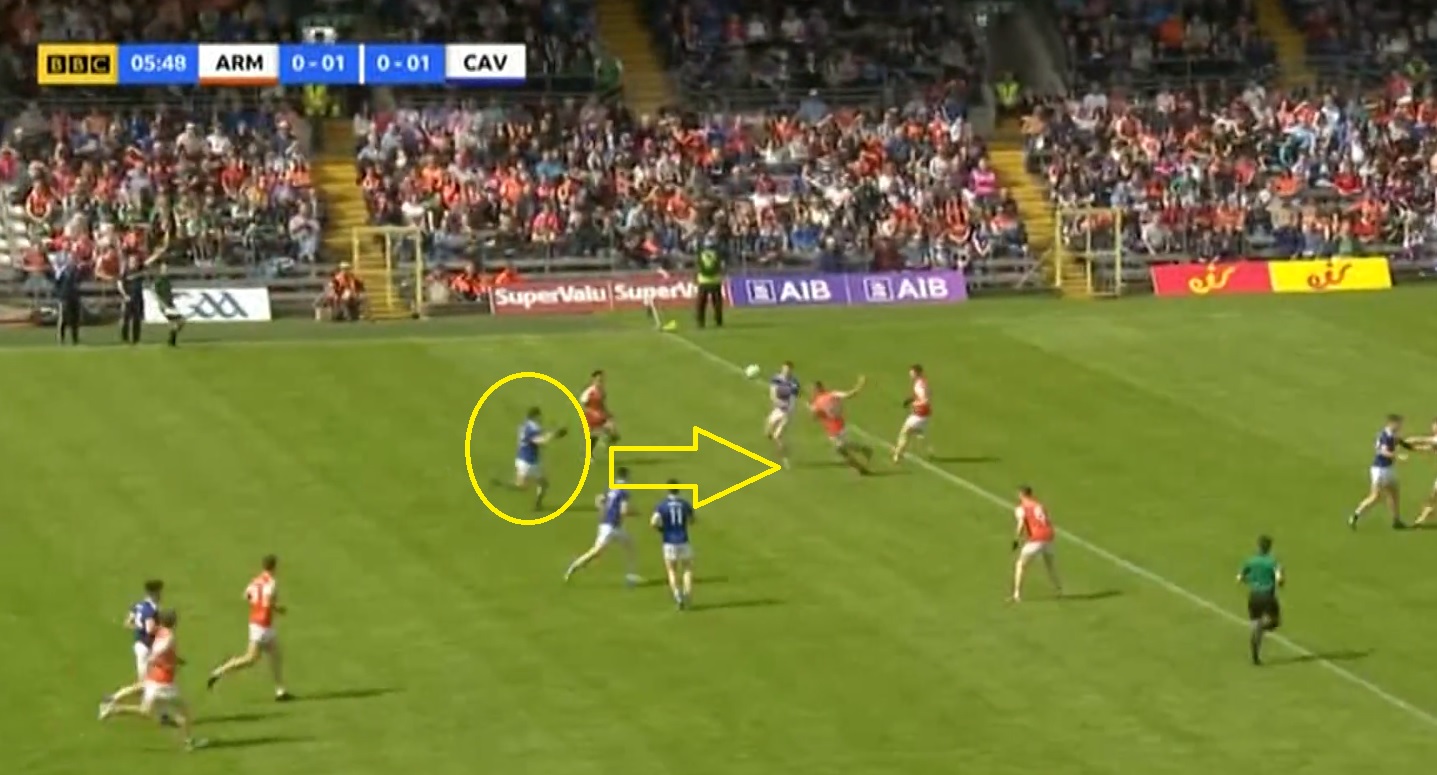 Murray, after a field length run, drives on and kicks a score. 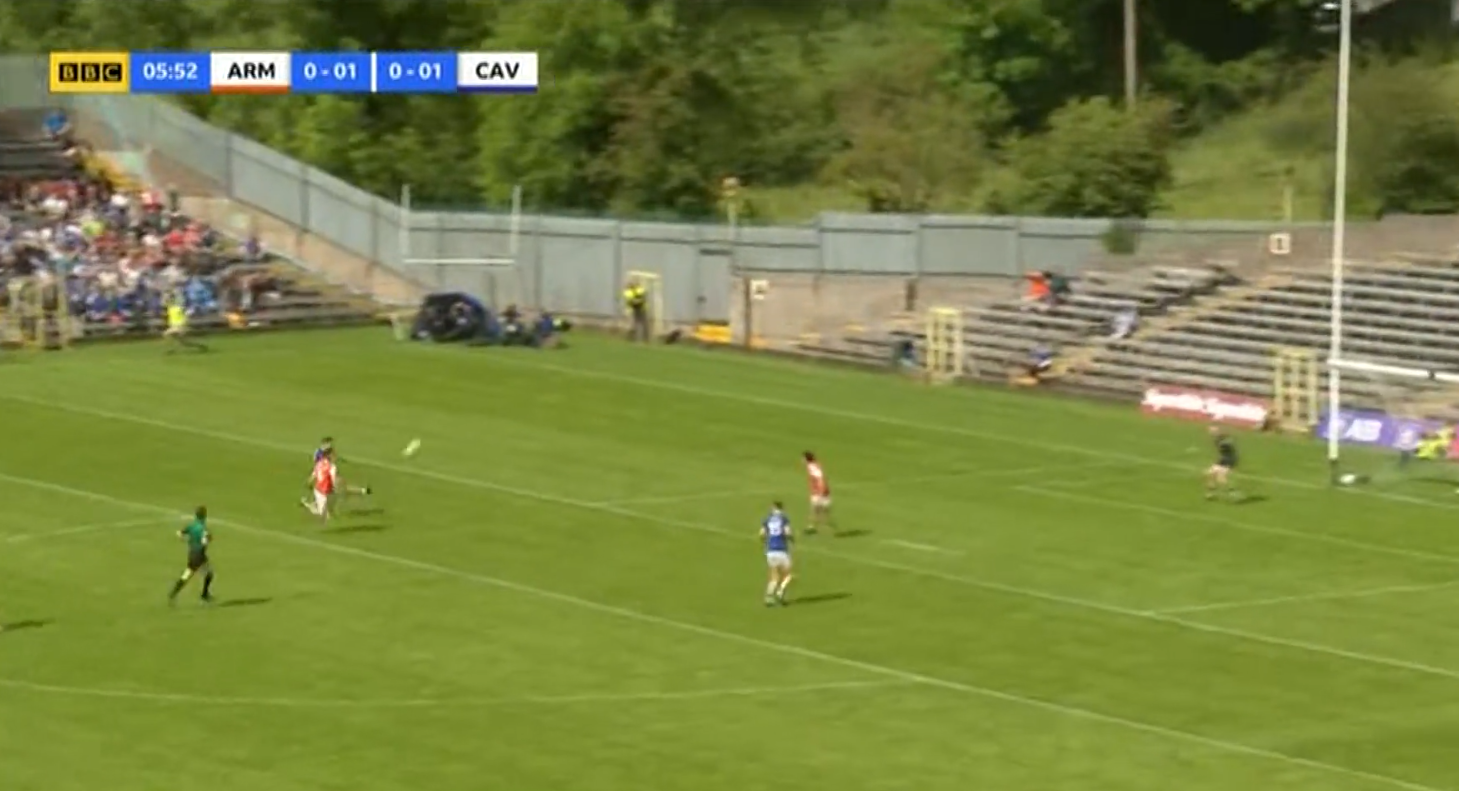 The evolution has been exaggerated. Theses turnovers still occur. Certain teams are just better at exposing them than others.

Not only did Cavan expose Armagh's problem, they showed them the solution.

"You can't underestimate the importance of that," bellowed an impressed Martin Clarke on BBC commentary. The platitudes kept coming. 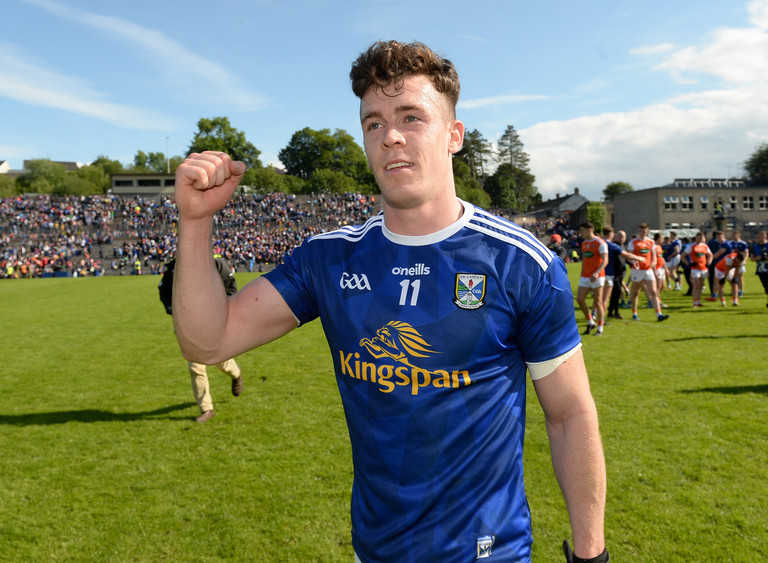 Cavan's main man is Crosserlough's McVeety. He finished with 0-4, three assists as well as winning two frees which resulted in scores.

It's not just what he did but how he did it. McVeety came in for some close attention from Paddy Burns. At times he also had James Morgan to contend with. Thus, he mixed up his positioning and rotated constantly.

At times, he was Cavan's furthest man forward and won inside ball by himself.

McVeety challenges for a long ball in and wins a close free, which Cavan convert.

Yet he was also an option from kick-outs, winning ball further out the field and stepping up as an outlet when his county needed him. In total, Sunday's man of the match received four balls directly from Raymond Galligan, his goalkeeper.

By the 50th minute, their lead was just one point. Cavan lost a series of kick-outs and needed a new outlet.

McVeety made a lung-bursting run from his own forward line to receive a kick-out in his own half. 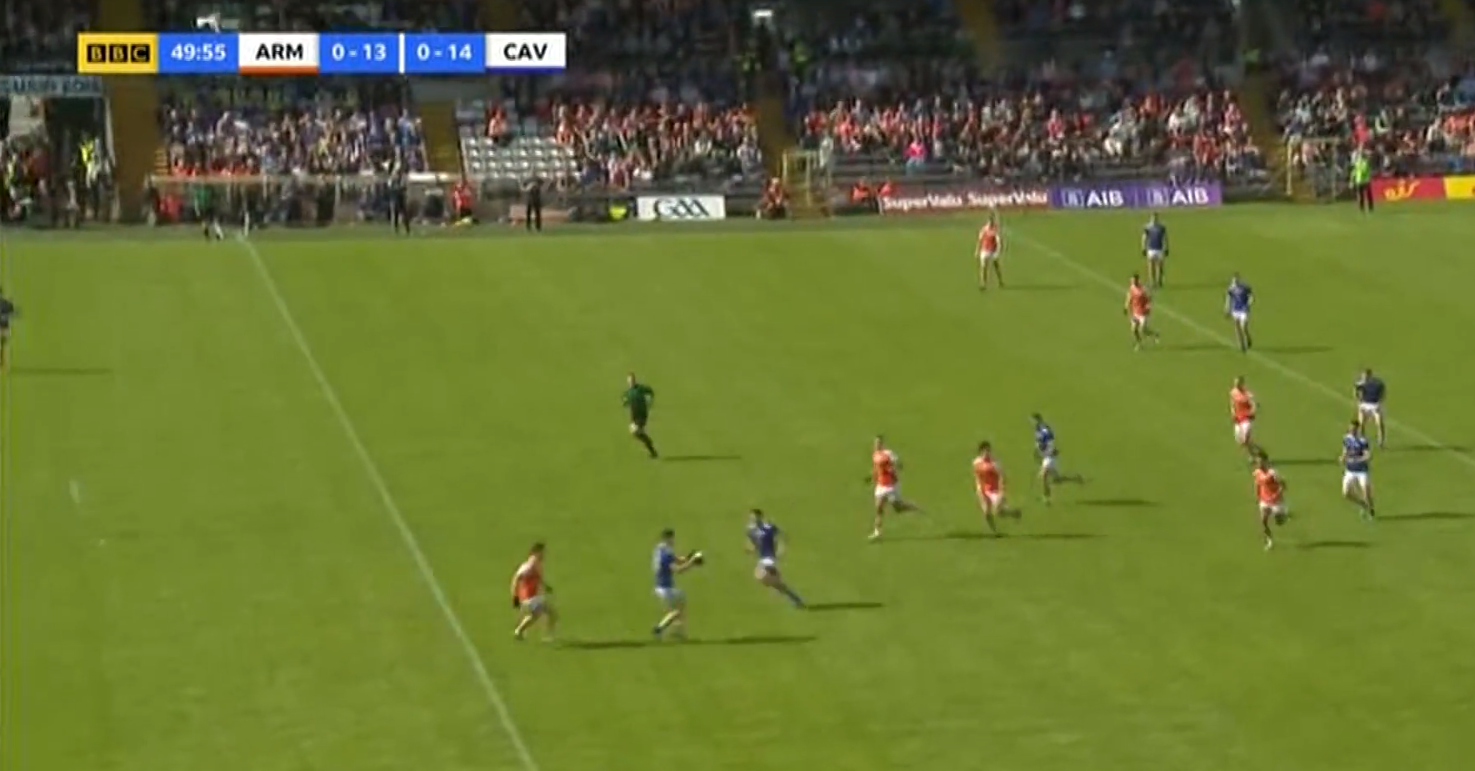 He immediately turned and delivered a pin-point kick pass into the path of Conor Moynagh. Moynagh drives forward and is fouled. Cavan convert the free and extend their lead to two. 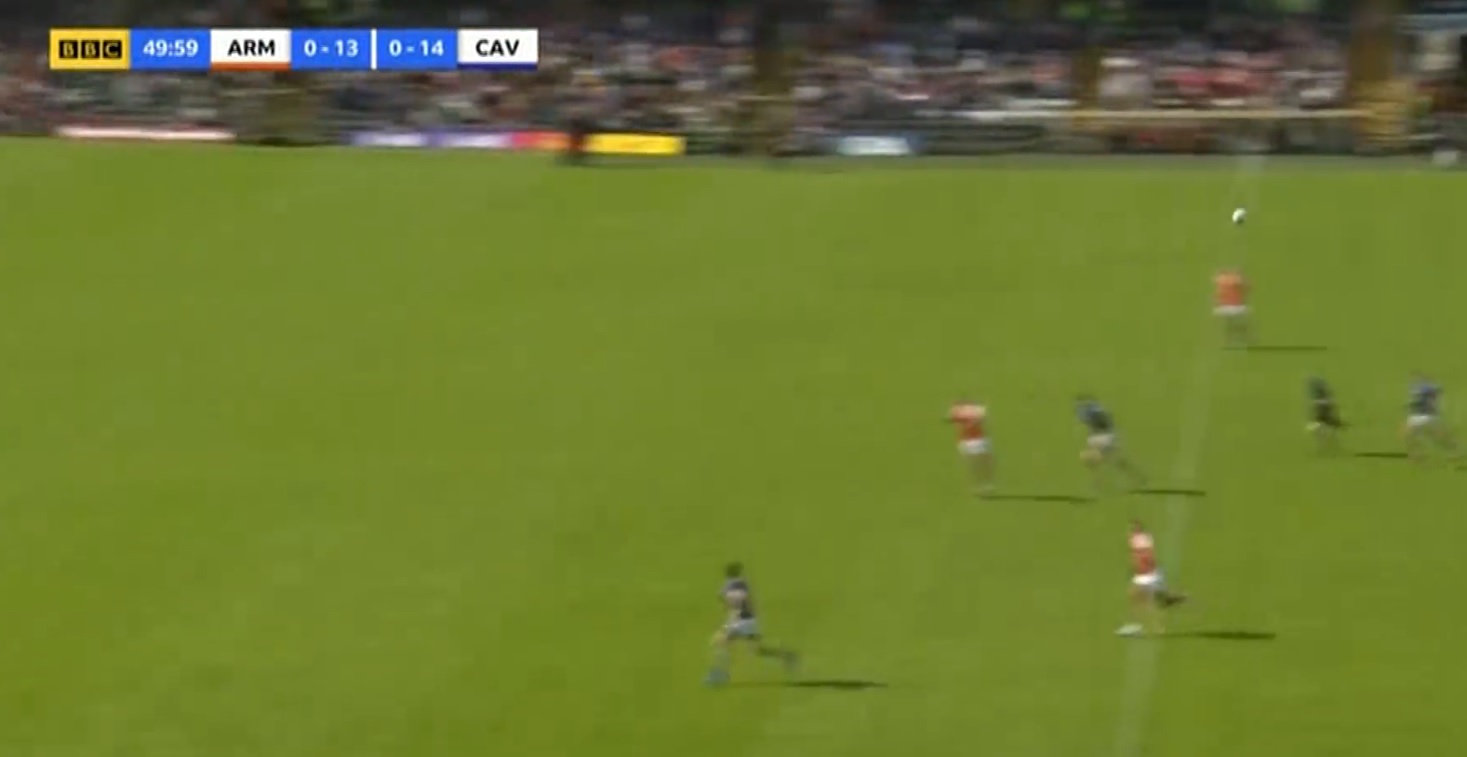 "I make the runs, the boys give it. If not, someone else will score. We have a good spread of scorers so there is not as much pressure for one man to get all the scores," McVeety explained post-match.

An approach that has paid dividends so far.