Gaelic games - which encompasses Gaelic football, hurling, ladies football and camogie - has overtaken soccer as the nation's favourite sport according to the Teneo Sport and Sponsorship Index 2018.

21 per cent of the 1,000 person survey identified Gaelic games as their favourite sport. That was two points ahead of soccer.

For the previous eight years of the survey, soccer had come out on top. However, it has seen a steady decline from 26 per cent in 2013 while Gaelic games has gained six per cent in that same period.

Other findings from the survey saw the Irish men's rugby side named as Team of the Year and November's victory against the All Blacks ranked as the greatest Irish sporting achievement of 2018.

For the fourth time in the last six years, Katie Taylor was named as Ireland's most admired sports star. Conor McGregor, who came out on top in this category for the past two years, finished outside the top ten with just two per cent of the vote. Taylor garnered 19 per cent. 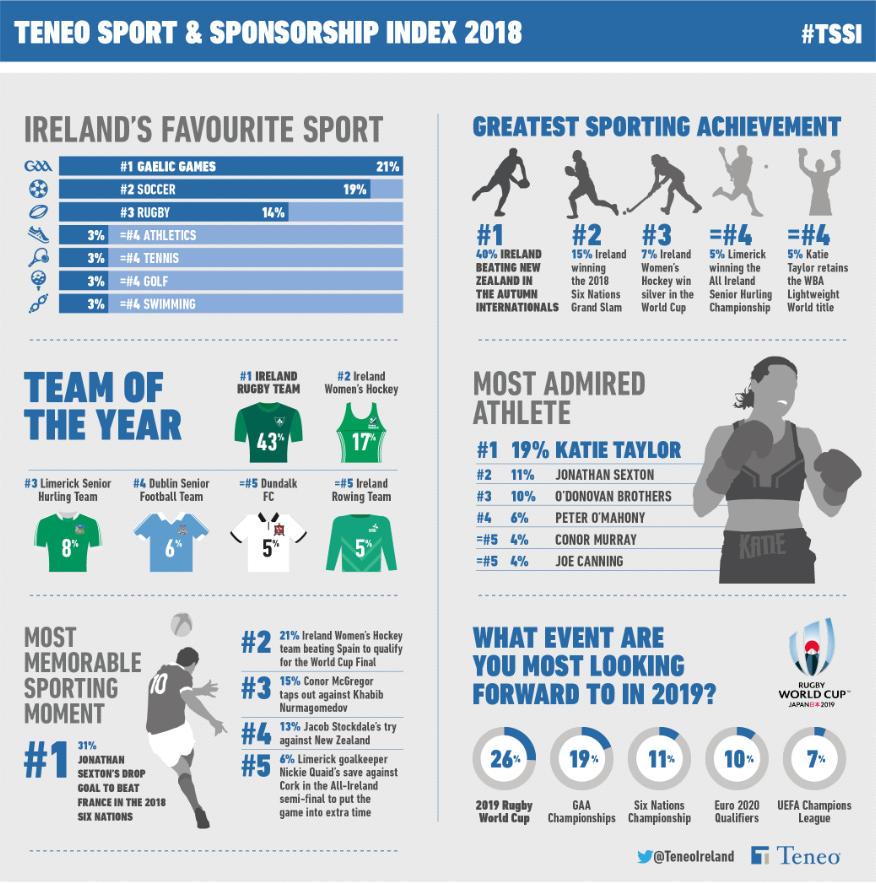 GAA
4 days ago
By Gary Connaughton
Davy Fitzgerald Clarifies His Role With The Cork Camogie Team
GAA
1 week ago
By PJ Browne
Ken Hogan Managed Two Teams To Two County Titles In One Day
GAA
2 weeks ago
By PJ Browne
12 Months After Cancer Diagnosis, Marianne Walsh Wins County Title
Popular on Balls
Football
13 hours ago
By Jonathan Byrne
Bellingham Not Happy With Match Fixing Past Of Referee In Bayern Loss
Snooker
16 hours ago
By Eoin Harrington
Ronnie O'Sullivan Has Photographer Thrown Out Of UK Championships Over Lack Of Tripod
Motorsport
16 hours ago
By Eoin Harrington
Verstappen Crashes Out Of Saudi Qualifying As Title Race Takes Another Twist
Football
1 day ago
By Jonathan Byrne
Jack Byrne Reveals Man City Player Who Was Toughest To Train Against