It went right down to the wire. But in the end, there could only be one.

Galway's camogie stars showed out in the dying minutes of the All-Ireland Senior Camogie Championship final as Cork brought it right down to the wire.

With a point in the game in the dying minutes, Orlaith McGrath sent two sliotars between the posts to see off their lead. It finished 1-15 to 1-12.

Manager Cathal Murray was full of praise after the full-time whistle sounded. "It's hard to put it into words, just so proud of the girls," he said.

It's been a year of ups and downs for the Tribeswomen as Galway were on the losing end of an All-Ireland final just nine months ago.

"These girls are always heroes"

Galway manager Cathal Murray spoke of the pride he has in his players after winning the All-Ireland title. pic.twitter.com/Nd4ZVd5iGk

"Last December, Kilkenny deserved all the credit and they brought a huge intensity last year. We didn't match it," Murray said.

A lot was said after the game about the reaction of the Galway players to Katrina Mackey's goal. It left Cork up by a three-point margin, but Galway didn't drop their heads.

"Our reaction now was unbelievable," a jubilant Murray said. "Just incredible leaders on the field ... I think it's a brilliant advertisement."

Galway have now won two of the last three O'Duffy Cup deciders. "To get to three All-Ireland's is unreal. But you need to win two of them and that's what we did."

A Sigh Of Relief

The performances of the likes of Aoife Donohue, especially in an exhausting first-half, was one of the deciding factors for Galway on the day.

Donohue finished the first-half with a fine point from the right flank of the field, before sitting down to get some physio done and take a well deserved breather.

Aoife Donoghue produces a superb score during stoppage time and a big celebration as Galway take a narrow lead over Cork at the break.

The Mullagh club woman was stuck for words afterwards. "We're absolutely delighted. I'm just so happy for this group of players and management team."

"This team has got a lot of criticism for not performing on the big days, but by god did we show up today."

A lot of praise post-match went to Cork for not letting it slip easily. With the margin so fine at the end, they gave the Tribeswomen a real go at the finish.

"It was an absolute battle, it could have went any way. We're absolutely out on our feet and we expected no less about Cork today," Donohue said.

After it's all said and done, manager Cathal Murray says the girls deserve to celebrate. "Look at, these girls are heroes, and they always are." 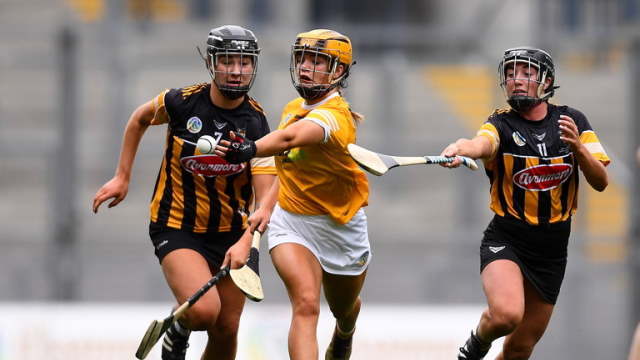