It was his own struggle which led to Noel Doherty looking for an answer.

In 2012, he was part of the Kilkenny intermediate hurling panel aiming to win their third consecutive All-Ireland but he'd picked up a hamstring injury. He was put on a rehab programme by Kilkenny strength and conditioning team Clare and Robby Lodge which involved eccentric hamstring exercises.

"It required a second person to assist - someone had to restrain my ankles while I was doing the exercise leaning forward," Doherty tells Balls.

"That person wasn't always available to me when I wanted to do the exercises. Therefore I didn't complete it and that was the start of my downfall. I was plagued after that with hamstring injuries because I never conditioned them properly to get back.

"I researched what was out there and there was nothing that could assist me. My background is in engineering and design. I set about developing my own solution."

That solution, one which has evolved and become more sophisticated over the past eight years, is now used by teams and sporting organisations in 17 countries.

That second iteration still looks simple: An angled, padded board with ankle hooks which allow an athlete to do eccentric exercises (also known as Nordic hamstring exercises) on their own.

It is what lies beneath that board which makes it so appealing to those big names. The Hamstring Solo Elite provides instant feedback on the strength of the muscle via an app which allows ongoing refinement of training programmes meaning players can spend more time on the pitch and less in the physio room. 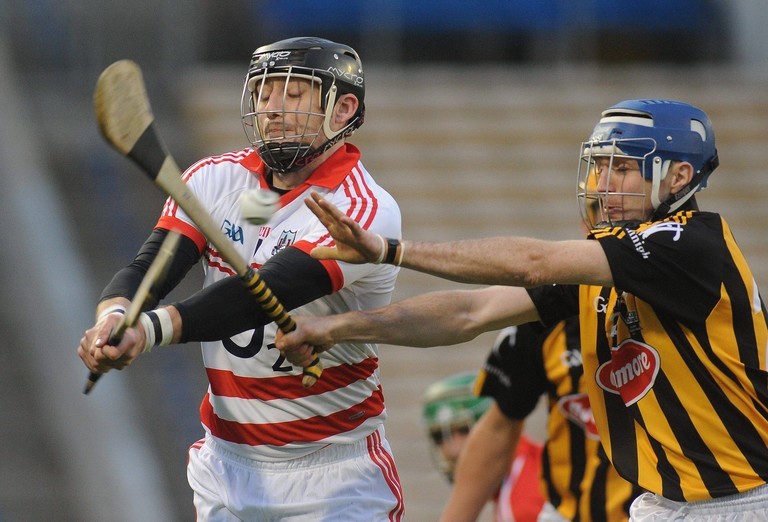 The idea that his design could be more than a substitute for someone holding down your legs came from a combination of Kilkenny legend Henry Shefflin and Dublin footballers' physio James Allen, at the time also physio to the Irish rugby team.

During a photoshoot, Shefflin mentioned that that one hamstring felt fine but the other didn't. That, coupled with some time and feedback he'd received from Allen, was the moment of conception for the Hamstring Solo Elite.

An imbalance in hamstring strength, like Shefflin felt, is one of the major risk factors in suffering an injury to the muscle. Doherty set about figuring out how he could measure that strength. If he could, it would provide valuable data to strength and conditioning coaches.

By introducing eccentric training to your conditioning programme, the latest science in 2019 shows there's a 51 per cent reduction.

Along the way, Doherty has received help from Enterprise Ireland and investment from Kilkenny businessman Michael Hoyne. The latter came via a Dragon's Den-style meeting with the Halo Business Angel Network (HBAN).

Though he wasn't even in the room on the night that Doherty pitched his product, ND Sports Performance hitched its trailer to Hoyne as he offered more than a financial investment, there was also business knowledge.

Though the company is still small - there are five employees - they've punched above their weight.

"We are outsourcing a lot of what we do: our manufacturing, our circuit boards, our app development," Doherty explains.

"It's all manufactured in Ireland, everything is done in Ireland. We're working with eight different Irish companies to produce our product and get it ready. We're employing people here in Ireland.

"It gives us great control and great quality. We don't want to be putting stuff out there and not being able to sleep at night. We've invested heavily in the quality of everything. The quality and the brand is everything.

"We've constantly developing the software. We've got a multi-functional data collection app together with a cloud-based storage platform. You can view it anywhere in the world and you can look at it on your phone, a tablet.

"There are competitors. We're taking a lot of their customers. We're making serious waves. We're extremely confident that our clients are speaking with their feet, that our system is a better product.

"We know we have a superior product but it's our service, our support, that's going to win out for us. We provide ongoing training to staff. We don't just want to sell a piece of equipment, rub our hands, take the money and run; we want to make sure that the staff can use and understand the system.

"They love having that after sales support; from a simple thing like, 'I can't find my password' or 'How do you export the data?' We're there to back them up.

"If someone is unsure of the equipment or the data it can provide them, we can go in and do a squad assessment. Every squad, without fail, has three or four players that are at high risk of injury. We can identify those players.

"We generally find that when we do an assessment, if the budget is there, the teams buy the systems because they see that they want to be able to monitor their players on a weekly basis."

For further inquiries feel free to email us on [email protected] pic.twitter.com/GZN0X1sUhb

The pause which Covid-19 forced upon sport has been used well by Doherty and his team. They've developed a third product, one which has its origins in time spent working with and listening to some of the best strength and conditioning teams in the world.

"This will monitor and analyse up to 30 different muscles in the body. It's very transportable. It can go into any gym in the world. It opens up a multitude of different assessments.

"We're giving objective feedback on all the other muscles. From the groin, to the hip, to the hip flexor, shoulder, shoulder rotation, neck muscles, ankle mobility; you name it, we can measure it with a system that can travel in a box that you can take on a commercial flight.

"We think it's impressive and anyone who has seen it so far would agree."

GAA
1 week ago
By PJ Browne
Sambo McNaughton Reveals 'Horrendous' Abuse Suffered Due To Speech Impediment
GAA
3 weeks ago
By Gary Connaughton
The 7 Stages Of Playing A GAA Match With A Hangover
Irish Life
3 weeks ago
By Balls Team
12 Of The Greatest Pieces Of Commentary In Irish Sport
Popular on Balls
Basketball
2 hours ago
By Eoin Harrington
Kieran Donaghy And Tralee Warriors Claim National Basketball Cup Title In Tallaght
Rugby
3 hours ago
By Colman Stanley
Michael Lowry Backs Up Farrell's Faith In Him With Superb Display For Ulster
Rugby
6 hours ago
By Colman Stanley
Jimmy O'Brien Announced His Arrival On The Biggest Stage This Afternoon
GAA
7 hours ago
By Eoin Harrington
Watch: Outrageous Score Helps Ardscoil Rís To Dr Harty Cup Victory