James Horan Believes Voting Against Proposal 'B' Was The Right Decision

It was not a surprise to see Proposal 'B' defeated at GAA special congress earlier today, but it still would have come as a blow to many inter-county players around the country.

The plan that would have seen a link made between league and championship, as well the introduction of a second-tier and reclassification of the provincial championships as pre-season competitions.

A number of figures in the game have already expressed their disappointment that the motion was not passed.

Very disappointed for players & supporters throughout the country that Proposal B was not successful today. There is now an opportunity & urgent need to consult again & bring back an amended proposal to Congress in February. Change is needed and we have to listen to our players.

However, not all feel that this was the wrong decision.

Speaking to RTÉ at a club championship game this afternoon, Mayo manager James Horan said he did not think that Proposal 'B' was the right fit, although he feels the championship will end up as some sort of league format in the near future.

Despite the result at Special Congress today, Mayo manager James Horan tells @mariecrowe that he expects a league-based championship to eventually come in to play. pic.twitter.com/iKbeMlHhcS

I was never too sure about Proposal 'B'. I think a league based championship is the way to go. I think in time that is going to come.

I'm just not sure if Proposal 'B' was the right format, or the right type of league based system. The provincial system would take a little bit of a hit, but I think everyone would get over that.

My point on it was the amount of Division One teams that wouldn't get a crack at the All-Ireland semi-finals, whereas a Division Three and Division Four team would.

Some of the nuances around that need to be ironed out a bit clearer, but I think a league based format is where we will end up.

Mayo said yesterday that their delegates would vote against the proposal, with the likes of Galway, Kerry, and the cast majority of counties in Ulster also doing so.

While this format was not adopted, it is highly unlikely that this will be the final attempt made to bring in major changes to the championship.

SEE ALSO: Everyone Had The Same Reaction As 'Proposal B' Was Defeated At Congress 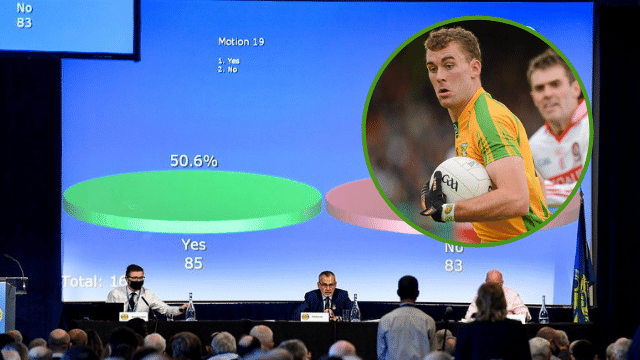