'There You Are Then, I'm A Hypocrite' - Brolly Explains Move To Eir Sport

There were eyebrows raised last week when it emerged that Joe Brolly would be a pundit on eir Sport for their coverage of this year's Allianz Football League.

The reason: Brolly has been a long-time opponent of the GAA selling rights to subscription TV channels. It raised the question, how will he justify it?

On Wednesday, the Derryman sat before the media at the launch of eir's Allianz Leagues coverage to answer questions on his u-turn.

His rationale basically has three points: The media world has changed; he still feels that he has more to give following his exit from RTÉ; eir is more widely available than other pay TV channels.

"I think the GAA has rejected my arguments completely," said Brolly.

"I suppose increasingly, I was feeling that you're howling into the wilderness. You say it to any of the Gaelic footballers or hurlers who are here today that there's a problem with eir or with Sky. They'd say 'What the fuck are you talking about?' It's clear that there's going to be a whole new landscape and it's happening so quickly.

"I'm a GAA man and the GAA is a democracy. I'm very pally with Jarlath Burns who is going to be the next GAA president. He said, 'This is done, this is set in stone. This is never changing'.

"Congress had three or four very half-hearted attempts to try and change the situation, all being emphatically rejected. I'm a lone voice really. It's going nowhere, it's dead.

"It becomes pointless, the argument is lost. My children for example [would say] 'What are you talking about?'

"We've seen what's happening with sports all over the world. Eventually, you sound like a Luddite, you sound like, 'Let's smash up the computers'. You become irrelevant.

"I was surprised when they (eir) did contact me to learn that 600,000 subscribers get the games for free with their mobile phone packages.

"On Saturday, I was down at Hope House, the addiction centre in Foxford. It's run by Sisters Delores and Attracta who are both GAA fanatics. They set it up in 1993.

"They were delighted because they've got eir through eir mobile phone package. During our meeting, they spent about half an hour listening to Midwest [Radio] on their mobiles and their coverage of the Junior All-Ireland semi-final between Kilmaine of Mayo and Na Gaeil in Kerry." 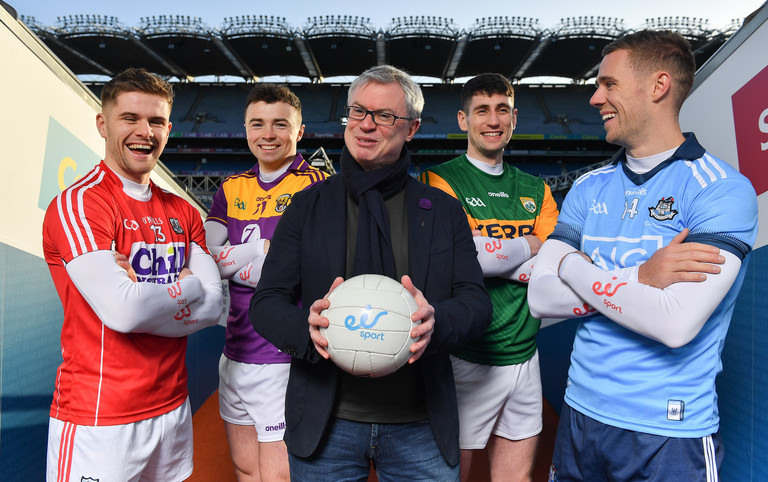 The realisation that the argument has been lost is a recent one for Brolly. In August, he tweeted in a reply on Twitter that "I would never for example work with SKY or Eir". When the existence of that (now deleted) tweet was put to Brolly, he responded: "Well, you know, there you are then, I'm a hypocrite".

After 20 years working for RTÉ, Brolly's last appearance on the national broadcaster was the drawn All-Ireland final between Dublin and Kerry. He was told by RTÉ head of sport Declan McBennett that his behaviour during the broadcast - mainly for telling Pat Spillane "Will you stop pulling my arm?" - had been unprofessional and that his contract would not be renewed.

"I was very hurt about what happened with RTÉ, and I don't want to leave it at that because I love the public conversation on the telly," said Brolly.

I also like opportunities. If somebody asked me to do something, I'd say yes like a parrot because you never know what you'd miss otherwise.

It's important also for the evangelising that I do in other areas like Cystic Fibrosis. I think also without the telly, your influence will diminish and diminish. It's all very well having a newspaper column in the [Sunday] Independent but nothing beats the immediacy of the debate and the fun.

The 50-year-old believes that his time at RTÉ would have eventually ended quickly enough had he not got the boot in September.

"For me, what has happened with the new head of sport in RTÉ is that it's becoming very narrowly focused on statistics, on banality, on safety and not saying anything," Brolly said.

"Making sure there are no letters of complaint in. I got a script for the All-Ireland final. I took a few screenshots so I wouldn't doubt my own sanity. 'You say this and this, and your video package will be this and this.' I rang up said you need a newsreader or a narrator.

"Of course, statistics can be helpful. They can inform your narrative. But that's it. It's different for the manager of a team.

"Young people want edgy discussion, edgy debate. The younger generation will be lost to this heavy statistical discussion because one of the problems for young pundits who have come out of the game is that they've been in that culture of secrecy throughout their adult playing life, where nobody says anything.

"You get used to speaking without saying anything and it's a very easy thing then to just become statistics driven. So a statistician was brought in and I became like a politician being directed by a spin guru. Your phone would be going buzz, buzz, buzz with these stats coming in from a laptop.

"You're like, 'Fuck, we haven't even reached half-time yet' and there's maybe 20 WhatsApp messages from the head of sport, who dominated the WhatsApp group.

"I was given the analogy of the murderer being hounded by Colombo. I turned around and there he was. It was a constant, constant thing.

"Colm [O'Rourke's] on the chopping block as well. He's got strong opinions. He's a man's man. He refuses to lick arse. You see that in the WhatsApp group, it's hilarious, you see the boys who are the arselickers, it's all, 'Great point, Declan. Oh, that's a great point. Brilliant point. Oh, thanks for that'.

"Every now and again, you might get a WhatsApp saying, 'Kerry's forwards have really improved at the start of the second half'. I would say, 'In other news, a bear shits in the woods'. Maybe something like that for the craic. This sort of stuff went down like a lead balloon. I stopped putting anything into it at all.

"For the replay this year, it came as a kick in the teeth for Colm after 30 years, instead of him being brought in, whatever reason he wasn't there in the first place, to bring in Stephen Rochford just typifies the banality, the blandness, the controlling culture that's there. You bring in a safe guy who's not going to say anything, he can go through statistics but who gives a fuck? Realistically, who gives a fuck?"

Brolly is scheduled to appear on coverage of four games for eir. He has been guaranteed that there will be no editorial intrusion.

Ultimately, he enjoyed working with RTÉ, calling it "a blast". His relationship with previous heads of sport differed to that with Declan McBennett. Those were ones restricted to Monday morning texts telling him, 'that was terrific telly'.

Even more than eir, the target of Brolly's opposition to Gaelic games on subscription TV channels was Sky Sports. Appearing on their championship coverage is a move he does not rule out completely. Though, there is a caveat.

"Maybe if, for example, they were agreeable to putting Sky Sports free into the hospitals," said Brolly.

"That's big for me because I spent a lot of time in hospitals through the CF and organ donation stuff. It would have to be something like that and I don't see any reason why that shouldn't [happen].

"The most vulnerable people in the community are the ones who are not going to see the games. Everybody else can see the games, that's the reality now. There would need to be something like that."

Billy Morgan: 'They're Just Clearing The Decks For Inter-County. It's Become An Elite Association'