Here it is then, the highlight of the GAA year: Dublin GAA CEO John Costello's Annual Report.

It is, without fail, the most bombastic and entertaining official GAA report of the year. While that may be a fairly low bar to clear, it nonetheless sails over effortlessly. Last year's took a dig at the haters and labelled Eamon Dunphy Mr. Flip-Flop, while 2016's edition referenced Donalds Trump and Rumsfield amid a full-throated defence of Diarmuid Cononolly.

So, here are some of the highlights of the 2018 version.

The Dubs - Beyond Measure

Boy is Costello proud of his senior footballers.

But statistics alone do not capture the majesty of this panel. Their style of play, dedication, attitude and humility make them the standard bearers. The team for the ages.

He praised their ability to think through games and figure out solutions in the heat of battle, and crowbarred in a delightful dig at the Omagh pitch.

The Dubs landed two hammer blows before the interval [of the All-Ireland final] through goals from Paul Mannion from the penalty spot - expertly dispatched after the Kilmacud Crokes man was fouled himself - and a Niall Scully goal, arriving with impeccable timing, following great work by Con O'Callaghan.

It is this trait which has been one of the most satisfying to watch over recent years - how the team think and work their way around the obstacles that are put in their way, be that packed defences or playing pitches that shrink in the summer heat!

Some of the commentary on our senior footballers and management was eye-catching and I think it would be remiss of me not to let it pass unchallenged. Words such as 'robots', 'automatons', 'emotionless' were used, by a small group of commentators, to describe our management and players on several occasions this summer.

Concerned by this matter we undertook an examination of the sum of the parts of all involved and am glad to report that no microchips, levers, wires, transistors, relays etc. were discovered! However, I can exclusively reveal that we did discover that Paul Mannion and Jack McCaffrey do have a sixth gear!

There featured a fabulous reference to John Delaney

When we were less successful, we were ridiculed for being too showy etc. - now it's the opposite. Perhaps Jim Gavin should run up and down the sideline during games gesturing to the crowd or throwing water bottles around to show his 'passion' or a senior ranking county board official should run to Hill 16 after some victory and throw their tie into the famous terrace? 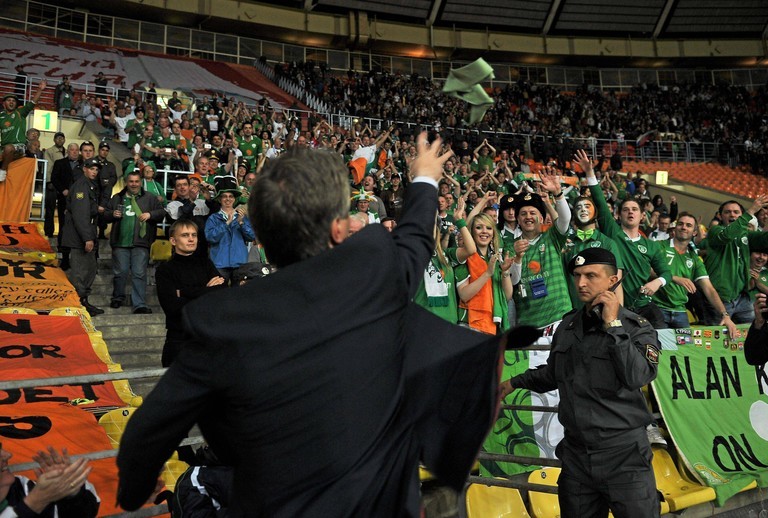 Dublin's funding? Not an issue

The money Dublin has received has been invested in our Games Development programme solely at nursery and juvenile level. Our Go Games programme alone, over the last 10 years, has seen a participation growth of 58% in football and 98% in hurling and 11,500 fixtures scheduled annually for children in the Under 8 to Under 12 age groups.

Massive numbers attend nurseries the length and breadth of the county on a weekly basis. The focus is on enjoyment, fun and introducing young boys and girls to Gaelic games and their local clubs, while also trying to strengthen the link between the local primary schools and the clubs.

Many stay and enjoy great years with their local club, while others, unfortunately are lost to the game, concentrating eventually on other pursuits. However, to draw a simple straight line, some linear equation, directly connecting this investment at nursery/juvenile level and the success of Dublin’s senior footballers years later is inaccurate.

I have read articles using the figures of adult players in the capital to suggest that the grants have been invested in our adult games and indeed directly towards our senior footballers and hurlers. This is untrue and at best is mischievous.

We all learned to join the dots in the early years of primary school but we didn't all make it to the status of artists like Jack B. Yeats!

Costello makes a very good point about the development of Dublin city, and the governing principle of NAMA.

Dublin cannot be allowed to become a city of concrete with no outlet for our youth to play sport and engage in healthy activities. I have previously mentioned the huge pressure that GAA clubs here face in terms of accommodating their growing membership and it is not a problem that is going to go away. Proper planning and provision is vital if Dublin is not to become a place to just work and sleep.

NAMA has largely delivered on its remit for both the Government and the tax payer. Is there a need now to sell off lands in bundles or at unnecessary haste when there could be a potentially major social dividend attached to them? What is left in the NAMA portfolio may not be massively attractive to investors but it could be gold dust to communities. The potential for a social dividend needs to be considered and weighted – it should not be all about money.

As NAMA winds down now and former employees move back into the development and construction sector it is more important than ever that the right - and fairest - decisions are made.

Give the Super 8s time....and a tweak

Twelve months ago, as we all awaited the arrival of the ‘Super 8s’ and various pundits queued up to ridicule the concept, I pleaded for patience. “Let's not rush to judgement. The  Super 8s are here for a three-year trial period so please give them a chance to sink or swim,” I wrote.

After one weekend, it seemed, the GAA’s latest big wheeze had sunk without trace. After two Croke Park double-headers on the same weekend produced four relatively ordinary contests, the jury was in with a unanimous verdict: game over, burst ball! But that was a typically Irish response to change; maybe a typically kneejerk Gaelic games reaction too.

One weekend later, after an intriguing battle up in Omagh between Dublin and Tyrone, a Kildare/Galway showdown that ebbed and flowed at a frantic pace, and a roller-coaster Clones thriller between Monaghan and Kerry, finishing in dramatic deadlock, we were all heading for the Appeals Court.

Maybe the Super 8s was a great idea, after all!

The truth, as ever, lies somewhere in between these polar opposites. It is neither the root of all fixture-making evil or a panacea for football’s ills. It is rather, I suspect, the first of several significant moves towards a different football championship.

But can it be improved? Yes. Should it be tweaked? Undoubtedly. You might accuse me of bias when I resist the argument that Croke Park cannot be considered an appropriate venue for hosting any neutral quarter-final fixture involving Dublin.

I still believe the Super 8s deserve an audition on the biggest stage and that all four neutral games should be played at HQ – but not on the first weekend, rather the last.

He advocates a tiered championship

This is superbly headlined 'Fears for Tiers?'

Dublin may have reached dizzy new heights under Jim Gavin, but it’s doubtful whether all those counties suffering double-digit defeats to us have benefitted greatly from the experience.

The solution? Not for one second am I advocating abolishment of the provincial championships. Even those counties with little chance of silverware, still want to play in them. But what then? Have the qualifiers run their course? It seems to me, at this stage, that a second-tier championship is the next logical step.

Ultimately, the competition must feel like something worth winning. Stage the final on the same Croke Park bill as the All-Ireland itself - that’s a no-brainer. Why not also have the carrot of a team holiday for the winners, along with promotion to the Sam Maguire
competition? And a separate All Stars scheme?

A lot can be achieved through imaginative thinking and marketing ..... and the first rule for the PR gurus…… don’t call it a B championship!

To those eternally issuing a diagnosis of Gaelic football:

Unfortunately when it comes to football, more of a 'Statler and Waldorf' tone is set from the get-go by some of Gaelic football's leading analysts, if the game does not enrich our summer afternoons.

This tone spreads like St Brigid's cloak and by midweek the end of the world is nigh!

Fixing the fixtures is everyone's responsibility

Costello does not downplay the importance of sorting out the fixture issue in the GAA, and praised Dublin's running off of their championship, citing the playing of games in April as one of the things that helped everything run relatively smoothly. He has a message for some of those 'carping' on about the issue, however...

There is also the need for greater honesty in the overall discourse on the fixture issue. The carping of some former intercounty players, who had no issue being lured to the States when their county was eliminated from the championship but are now insisting on a ‘club comes first’ approach, is interesting to say the least.

We should all take a look in the mirror once in a while.

The full report can be enjoyed here.

See Also: 'It's A Holy Grail. Mourneabbey Will Never See Anything Like It If They Win'

Hurling
2 weeks ago
By PJ Browne
'We're Bitterly Disappointed. Everyone In The Dressing Room, They're Really Down'
Previous Next

GAA
4 days ago
By PJ Browne
'It Would Probably Help Us If It Was Out Of Croker'
GAA
5 days ago
By PJ Browne
Canavan Calls For Cavan Vs Dublin Semi-Final To Be Played At 'Neutral Venue'
Hurling
2 weeks ago
By PJ Browne
'We're Bitterly Disappointed. Everyone In The Dressing Room, They're Really Down'
Popular on Balls
GAA
13 hours ago
By Sean Meehan
GAA Mulling Over Decision To Play Club Before Inter-County In 2021
10