"They're celebrating like they've won the World Cup, not to mind the Westmeath semi-final."

The 2013 Westmeath SFC semi-final between St Lomans and Garrycastle had enough drama to warrant a stage play. If one was written, the main character - the hero - would be Lomans' John Heslin.

At half-time of a remarkable match, which saw 7-28 scored in total, Garrycastle - playing against the wind - had hit just seven scores, but crucially three of those were goals giving them a two-point lead.

"I said to them at half-time - 'you're going to grow up as men in the second half; if you come out of this, you'll have learnt an awful lot'," St Lomans manager Declan Rowley told the Westmeath Independent at the time.

"We re-jigged our full back line and got it reasonably well sorted out for the second half. We looked like we had it."

Rowley had good reason to believe his team were on the verge of their first final since 2009. Two-and-a-half minutes into what was supposed to be two minutes of injury time, Lomans led by a point.

Then, the referee awarded a penalty to Garrycastle. The penalty, his second of the game, was dispatched by Gary Dolan, giving his side a two-point lead.

However, the drama was not over there.

"I remember being on the 21-yard line when they got the penalty, which they kicked to the back of the net. I thought they had the game won," John Heslin told GAA.ie in a 2016 interview.

"In fairness to our goalkeeper, James McKenna, he got the ball really quickly and as I was still on the 21 he kicked it to me. I passed it up the pitch, exchanging it with a few lads, and I continued on up.

"Conrad Reilly got the ball and I was on the 45. I was wrecked as it was the last minute of the game, but I remember one of my team-mates shouting ‘Get in there’.

"Conrad Reilly got the ball and lofted it up and I was lucky enough to get a hand on it and it went in off the post. It was an amazing feeling, turning around to the crowd and my team-mates knowing the game was as good as over.

"I said to John and the team before the game that we, as a group of young fellas, have to try and emulate what Garrycastle have done," Rowley said afterwards.

"Equally so, John is the man to take over the mantle from Dessie Dolan, who has been a brilliant footballer for Garrycastle and for Westmeath over the last 12 or 15 years. John was just magnificent today." 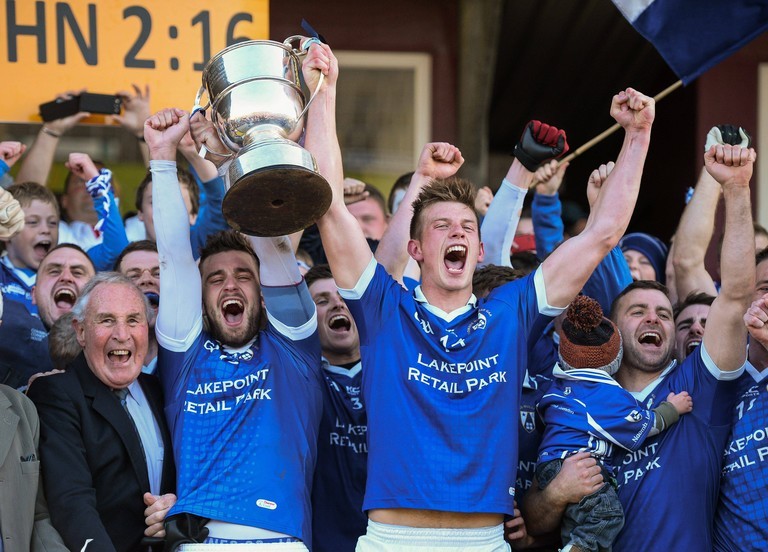 In the final a fortnight later, St Lomans faced Tyrrellspass who had beaten Mullingar Shamrocks after a replay in their semi-final.

Lomans won by four to claim their first Westmeath title in 50 years.

Fittingly, as Heslin lifted the cup at Cusack Park, a sign reading 'John 2:16' was raised behind him.