Kiely Accuses Galway Of 'Embarrassing Simulation' In Win Over Limerick

Limerick suffered their first defeat since 2019 on Sunday, going down by six points to Galway in Salthill.

Post-match, Limerick manager John Kiely expressed his displeasure with the GAA for tinkering with the rules and the match  officials for their application of the rules. He also accused Galway players of simulation.

"I think it's a worry for the game, as much as it is a worry for us," Kiely told reporters when asked about the free count which saw 22 awarded to Galway.

"Having seen two games now, I'd have major concerns as to where we are at on this."

Kiely admitted that Galway had been the better team and said that his side have to take responsibility for their own performance levels.

"However, it does appear that the game has changed in the last four months while we've all been at home," he continued.

"Somebody has decided to take the tackle out of the game. I'd love to know who they were, and when that was decided.

"I think the people at home today were saved €20 because that wasn’t a spectacle that anybody would like to be a part of."

Kiely said that many of the frees awarded to Galway were legitimate. He also felt there were some manufactured by the Galway players.

"When a player has the ball, and they run at you and throw themselves on the ground and they're roaring and shouting, that's embarrassing. That's not part of the game.

"There were clear examples of simulation there today. A couple were very embarrassing. None of us want to see that brought in as part of our game.

"The referee's interpretation of the rules, and our understanding of that, is at an all-time low. We don't clearly know what it is that we're expected to do.

"We had players today who were being physically held from running. An opposition player even hurt himself trying to prevent a player from running. It was in open view of umpires, linesmen, a fourth official, and a referee, and they couldn't see it. It persisted throughout. Yet, a player can put a hand in in a tackle and within a split second it's a free. 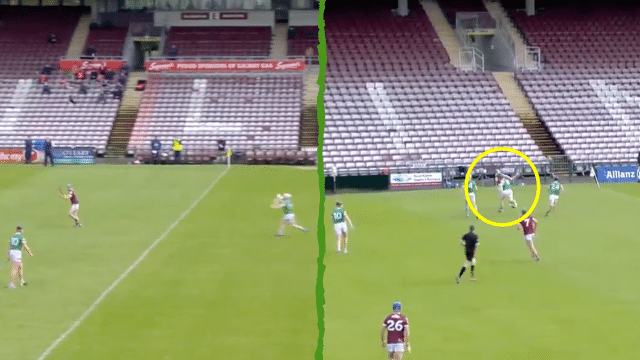