After a stunning All-Ireland final, all of the talk around the game should be on the remarkable spectacle that unfolded over the 70 plus minutes of action in Croke Park. To be fair, most it has been.

However, we need to discuss the coverage of the Johnny Cooper red card.

Cooper was sent off at the end of the first half after receiving a second yellow card. It seemed like an obvious call at the time, with the Dublin defender pulling David Clifford down by the arm on two separate occasions. He also had a few other niggly tackles, with the accumulation of fouls no doubt also a factor.

However, on RTÉ at half time both Ciaran Whelan and Joe Brolly were adamant that he should not have been yellow carded the second time. In fact, they even went as far as saying it could have been a free out. Pat Spillane was the only person speaking any sense, and you know something is up when that's the case.

Whelan would always argue the case for Dublin, but Brolly has become increasingly steadfast in his praise for the Dubs in recent times. Before the game he said that a win for Kerry would be 'the biggest upset we've ever seen', hardly a glowing reference for Kerry's All-Ireland hopes.

While he rightly praises what is a phenomenal Dublin team, he also tends to ignore the elephant in the room. He never discusses the funding advantages handed to the county and to completely disregard its impact is disingenuous.

The discussion around the red card today was a complete circus and it bordered on embarrassing for the national broadcaster.

Dublin's Joe Brolly needs to take those blue tinted glasses off. That's a definite yellow! We never thought Pat Spillane would be the only man of the panel talking sense 😂#AllIrelandFinal

There was a much more straightforward conversation on Sky Sports, where Kieran Donaghy, Peter Canavan and former Dublin star Senan Connell were all in agreement that referee David Gough made the correct decision.

Connell: In David Gough's mind there is an accumulation of fouls here. No matter what else you have to disciplined in the tackle after you give away a certain amount of frees.

We said here in studio that Johnny was going to have to be very careful and it's the accumulative fouls that will hurt him. They did in the end.

Canavan: You said that right away and he needed to be taken off him, because Johnny Cooper can't play any other way but be full blooded and attack the ball.

We're waiting for years now for Jim Gavin to show some signs of complacency, did he have too much trust in Johnny Cooper? Why did he not move Michael Fitzsimons onto their star man? David Clifford was playing really well. 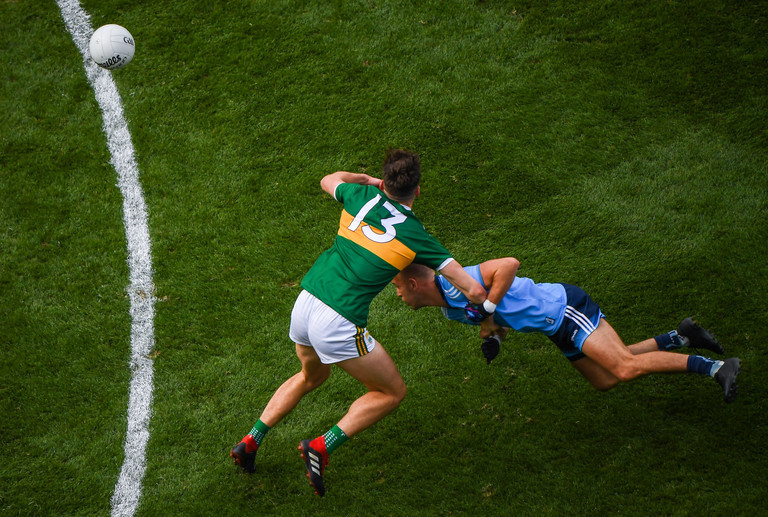 Connell is as big a Dub as anyone and for him to say that Cooper deserved the red card speaks volumes.

Joe Brolly and Ciaran Whelan's argument was absolute nonsense. They essentially claimed that Clifford used his body to turn Cooper and that the Dublin defender had no option other than to do what he did. When you watch the incident back it tells a very different story.

Brolly also said the penalty shouldn't have been awarded, and while it was certainly on the softer side, that is given as a foul every time in other areas of the pitch.

Joe Brolly accused David Gough of crumbling under the pressure of the 'propaganda' that came his way from down south.

It was a ridiculous thing to say about an individual who is widely accepted as the best referee in the country. To openly question his motivations for making those decisions is absolutely ludicrous. Gough had a fantastic game, and got all of the big decisions correct.

The only question mark was around the penalty save, where Stephen Cluxton came off his line. That probably falls more in the remit of the umpires, however. Perhaps unsurprisingly, Whelan and Brolly were much less damning in their analysis of that incident.

We should expect better from those who are tasked with covering the game on our national broadcaster.

GAA
2 days ago
By PJ Browne
'We Discussed About Me Transferring To Sligo. I Still Have The Transfer Forms'
5

GAA
3 days ago
By Michael McCarthy
Quiz: Can You Identify These 10 Intercounty Gaelic Footballers?
Previous Next

GAA
2 days ago
By PJ Browne
'We Discussed About Me Transferring To Sligo. I Still Have The Transfer Forms'
GAA
3 days ago
By Gary Connaughton
Former Roscommon Footballer Conor Connelly Passes Away At Age Of 44
GAA
3 days ago
By Michael McCarthy
Quiz: Can You Identify These 10 Intercounty Gaelic Footballers?
Popular on Balls
The Rewind
12 hours ago
By Mark Farrelly
No Set Of Roomates Will Be Able To Top This Lockdown Dance Video Epic
20