Seven consecutive Galway titles, three in Connacht and one of only four clubs to ever win two All-Irelands in a row - no doubt many look with envy at Corofin.

Surely, they also gaze with admiration. Those titles have been won with a style which many frame as the ideal for Gaelic football; an attacking, free-flowing game featuring all that is good about the sport.

"It's just probably through the underage structures," says Kieran Fitzgerald, explaining where that style of football originates.

"Frank Morris would have been a coach at underage with us all the way through the years.

"There was a philosophy of his where everybody, skill-wise, had to be able to kick with their left, right, solo left and right, handpass left and right. We were always encouraged to kick the ball, move the ball as quickly as possible.

"You'd be pressed to be two-footed by under-14. You were always encouraged to use both feet and kick the ball as much as possible. It's more of a team game than an individual game - you were called out if you were playing individually.

"I remember down through the years that there would be conditioning games where you couldn't solo the ball - a solo was unnecessary, you had to move the ball as quickly as possible. It's something that's stuck with us.

"We’re kicking the ball as much as possible, playing as many games as possible. 7s football is a big part of our club, we play it regularly at training, we always send a team to the Kilmacud 7s. 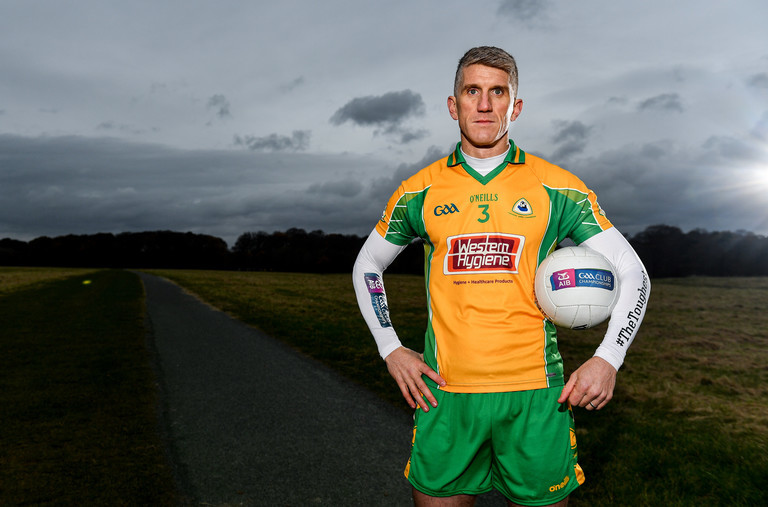 Back in March, Fitzgerald - who turns 39 in January - won his third All-Ireland club title when Corofin defeated Dr Crokes. Had one season not run into the other, and he'd been given more time to think about it, he may have hung up his boots for good.

Instead, he continued on and helped Corofin to their 21st Galway title - his 14th.

This weekend, they face Roscommon side Padraig Pearses in the Connacht final at Tuam Stadium.

"Some people say you’re 38 and you’re playing football, how do you do it?" says Fitzgerald.

"But I’m playing with a club that’s been successful. If you can stay injury-free, it’s not that hard. It’s the guys that are struggling in clubs that are fighting relegation, and are just maintaining, they’re my age, they’re the lads that really deserve the credit!

"Past All-Irelands are never spoken about in the group. The Crokes game, it's forgotten about. Lads are really driving it on. We know that we're in a particular period where we have a good group of players - they're eager, young and hungry. They drive it themselves.

"As a club, we want for nothing. It is enjoyable and there's a good balance. It's not the inter-county scene, it's a club scene.

"Training is enjoyable. It's not as attritional as inter-county. We're doing drills that we've been doing since underage. There's nothing technical about it.

"Players are really pushing it. They are looking at the underage, Salthill are coming really strong, Claregalway, Oranmore - it's not going to last forever. Right here, right now, we're going to push it hard as we can.

"There are standards that are expected. In fairness, we have 30-plus guys and the commitment is massive, lads driving across the country to make training in Galway at 7:30pm and then back up again to Dublin or whatever - I know other clubs do it as well.

"There's a lot of emphasis as well on the social aspect - I don't mean going on a night out - but family, girlfriends or whatever.

"Some nights aren’t that nice going training, you’re looking at the wind and rain across the floodlights and at least you know you’re going to play a bit of ball.

"And it’s short and snappy, an hour and ten, no longer than that. It makes a difference when you’re doing it a long time rather than two or three-hour sessions and meetings and stuff. It's working for us."