McGeary's Remarkable Numbers Are Only One Part Of His POTY Form

They were frantic and ferocious. Last Saturday, Tyrone did what Tyrone at their best do. Tackled and thundered. It takes a significant physical and cognitive toll to relentlessly force turnovers, but the payoff is obvious.

For Kieran McGeary, there was an extra carrot at the end of every stick that made each one of them that bit sweeter.

"The roar is something else," he told GAA.ie. "The Tyrone supporters here today, what they do for you in specific moments is just incredible. They give you another set of legs. It is unbelievable."

He and his fellow troopers gave their fans plenty to cheer about. Kerry turned over the ball 35 times. At the heart of Tyrone's extraordinary shock triumph was man of the match McGeary, making his team tick with and without the ball. 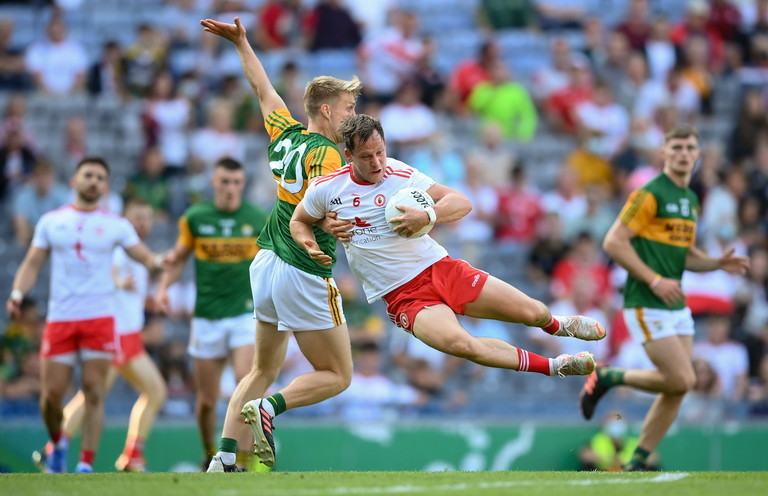 It is the second time in the 2021 Championship that the Pomeroy Plunkett’s clubman has been awarded man of the match. He was outstanding against Donegal last month as he has been all summer long, rewarding the faith shown in him by joint-managers Feargal Logan and Brian Dooher when they named him vice-captain earlier this year.

"There is no doubt, even in his early years, that Kieran was a huge leader in the team. He speaks very well in the changing rooms, even in the training sessions, he drives them on. He’s a real passionate guy," said AIB ambassador Colm Cavanagh this week.

The first 20 minutes against Kerry, I just couldn’t believe what he was doing. All the tackling, turnovers, linking the play. He was just everywhere. He’s a massive ball of energy really.

I’m delighted to see how well he’s playing and he’s obviously in line for another big performance in the final that will wrap up a good year for him. I’m sure Mayo will be looking at him and trying to shut him down because of how influential he is.

Versatile and athletic, the school teacher epitomises the modern game where the number on a player's back has little correlation to their role. The need is to be the master of several trades. Fit and fluid. His realm is the middle third and there he ruled.

In Saturday's semi-final, McGeary had an eye-watering 40 possessions with no unforced errors. He won six turnovers and had six tackles.

On the other side of the ball, he had three assists and two assists that led to converted frees. He also earned six frees and won one kick-out at a stage of the game when Tyrone were under considerable pressure.

Kerry got their full-court press set up during a delay in the game. 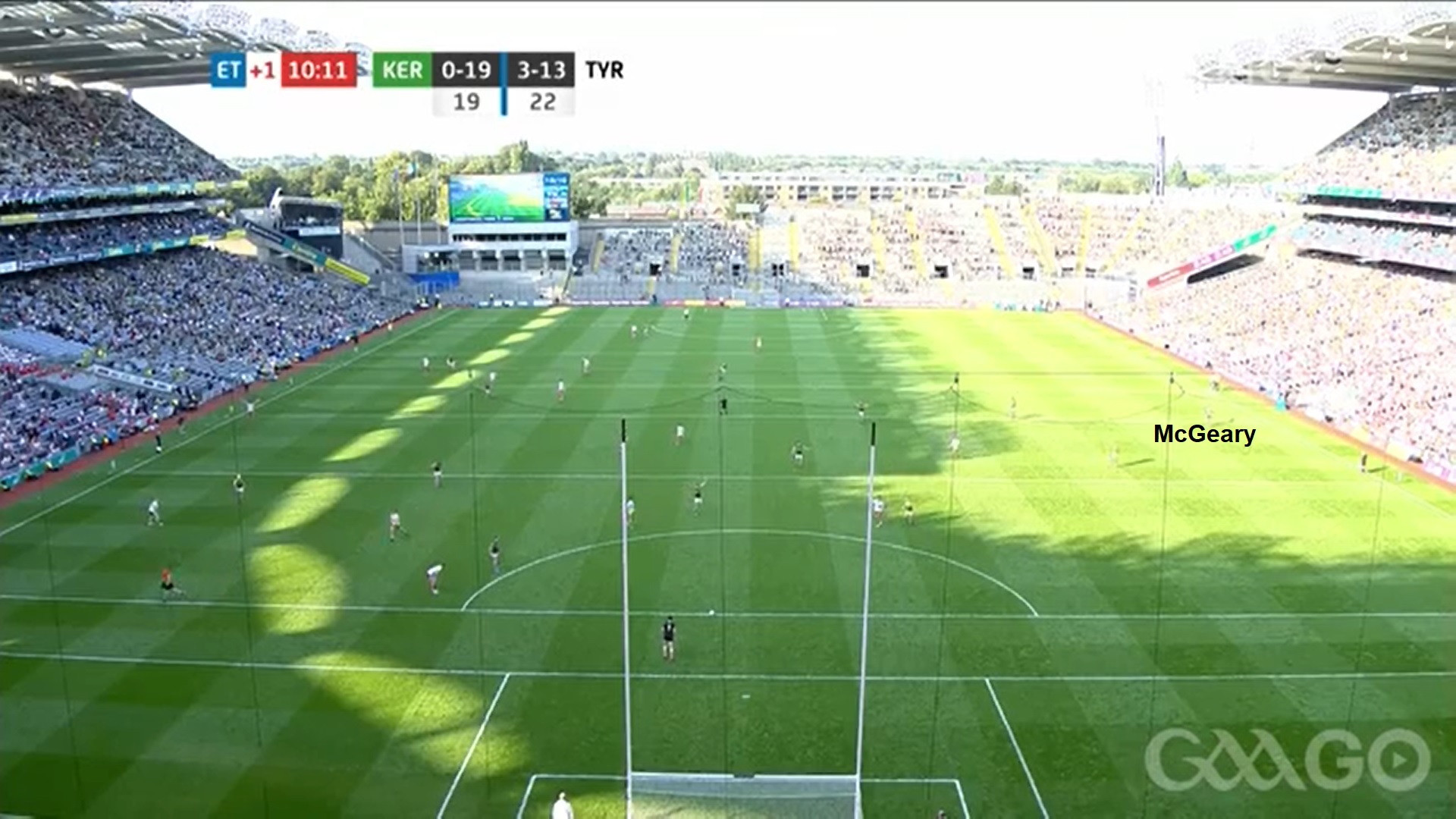 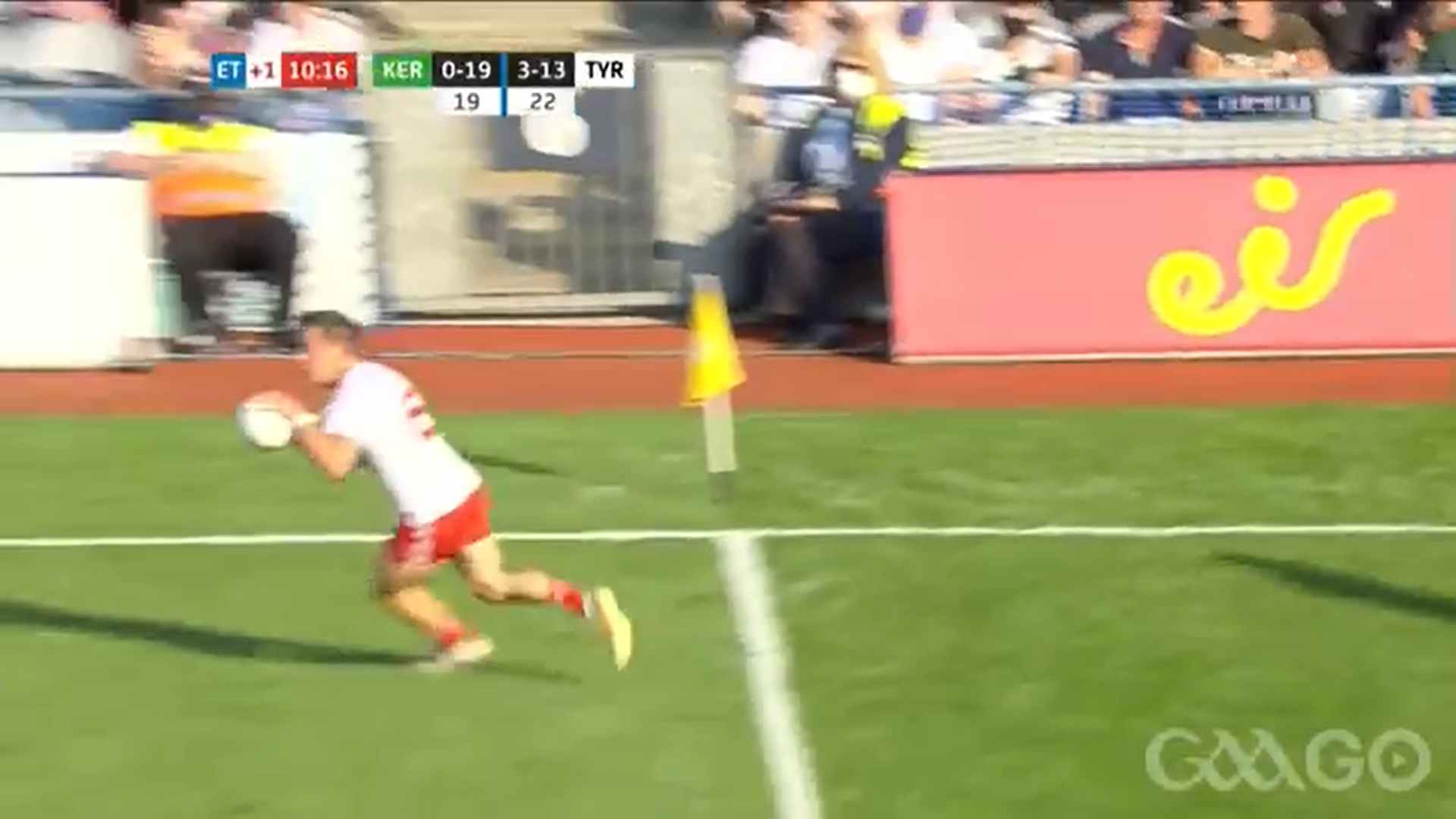 He turned and raced up the sideline, before kicking a perfect pass to Cathal McShane. 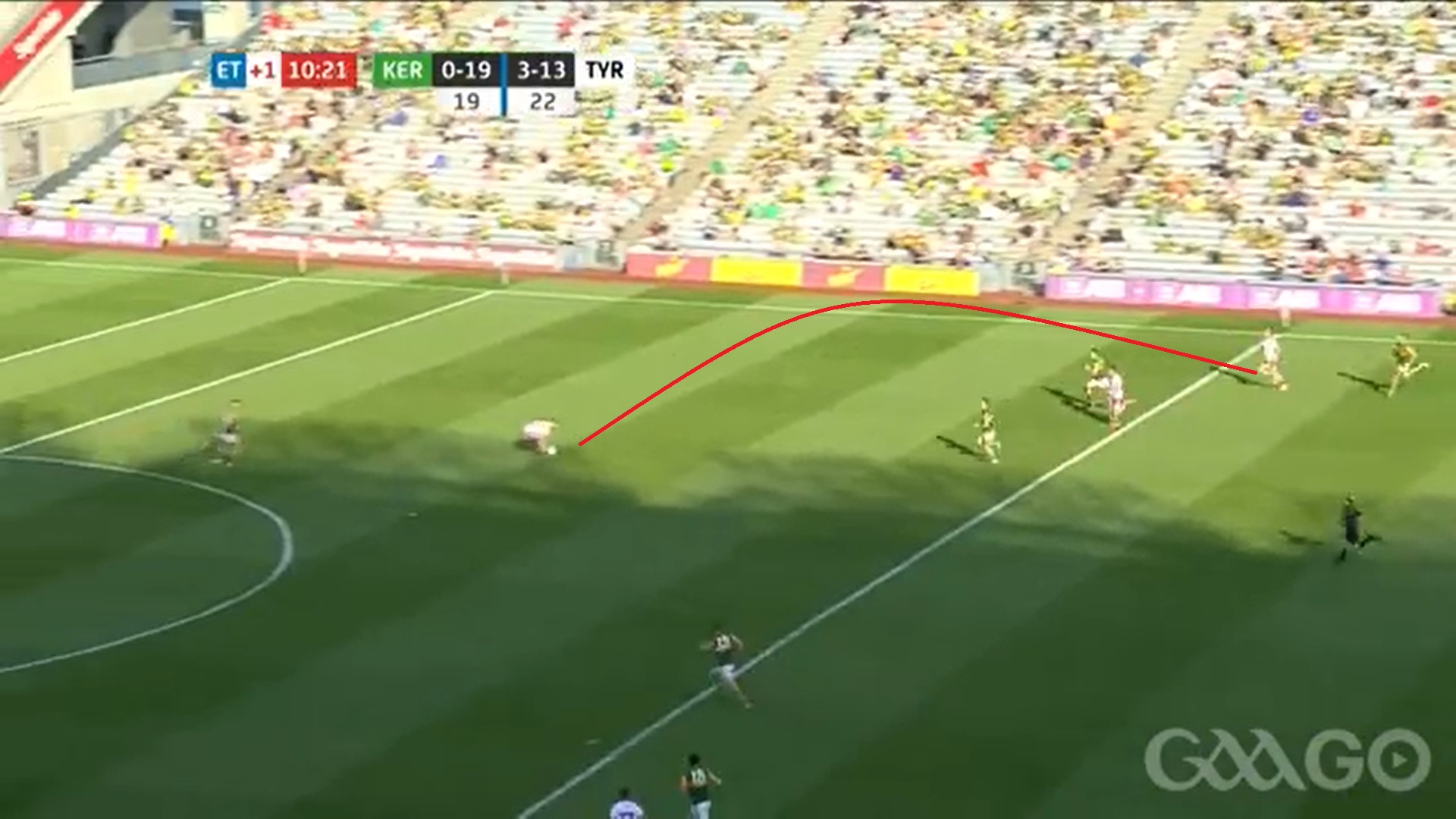 McShane kicked a score and the lead was back to four. 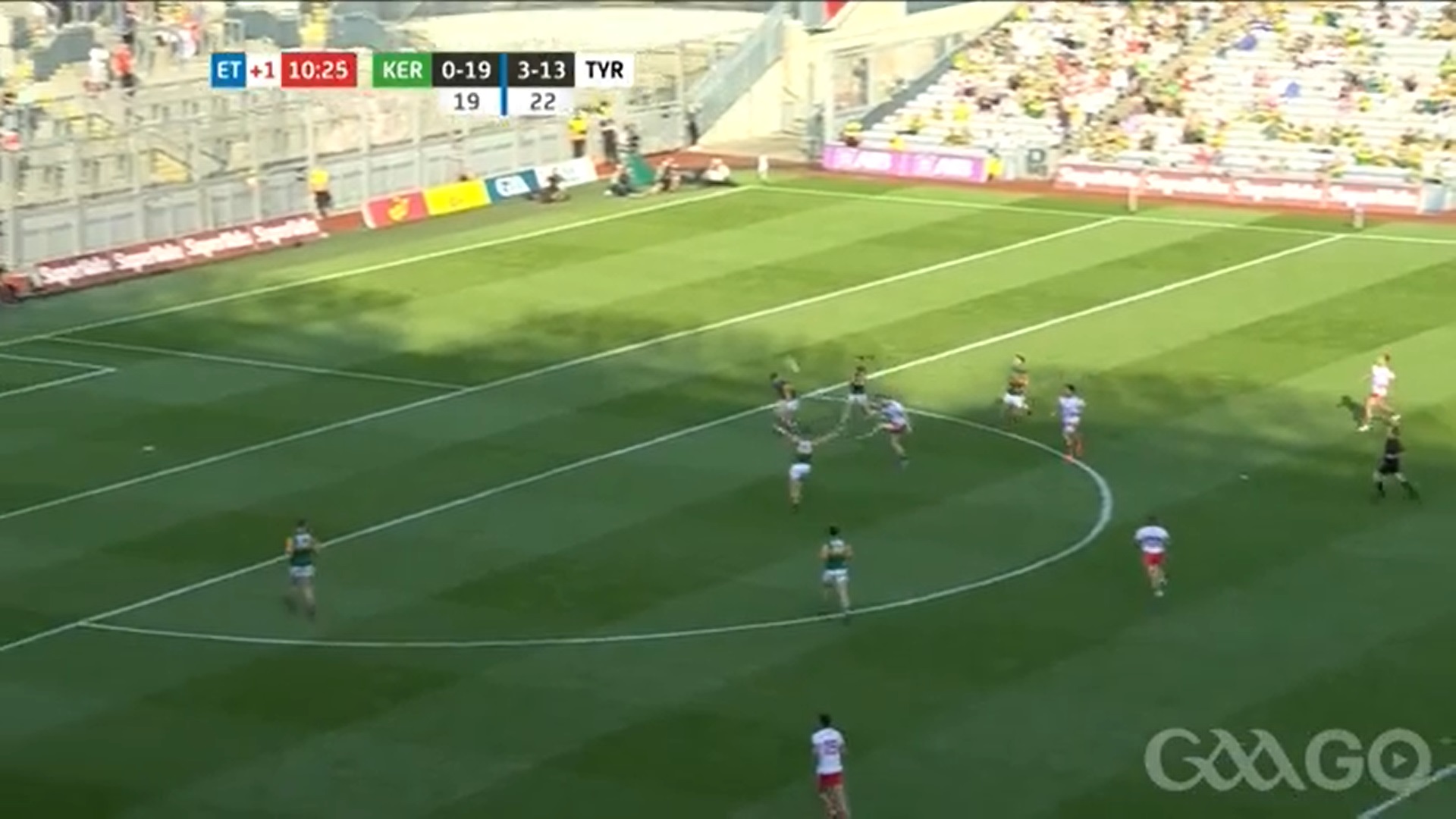 The numbers only tell part of the story. McGeary matched up against Kerry's Gavin White. The wing-back was also prominent with 28 possessions, but crucially he did not kick the ball once. Afforded space that was repeatedly squandered.

Tactical inflexibility was at the root of so many Kerry problems. Too often pondering and predictable. Over and over, they carried the ball into contact, darted up blind allies and failed to work a scoring opportunity.

In contrast, McGeary kept Tyrone ticking over. Effective half forwards hunt and harry when their team are out of possession. They track the ball and manufacture traps, triggering two vs ones when attackers are held up.

McGeary's engine is such that he also does this while Tyrone are in possession. Impactful on both sides of play. The crucial cog in a tireless wheel.

When Niall Sludden attacked down the flank, he was stood up by Stephen O'Brien. Kerry have the opportunity to force a two vs one and turnover. 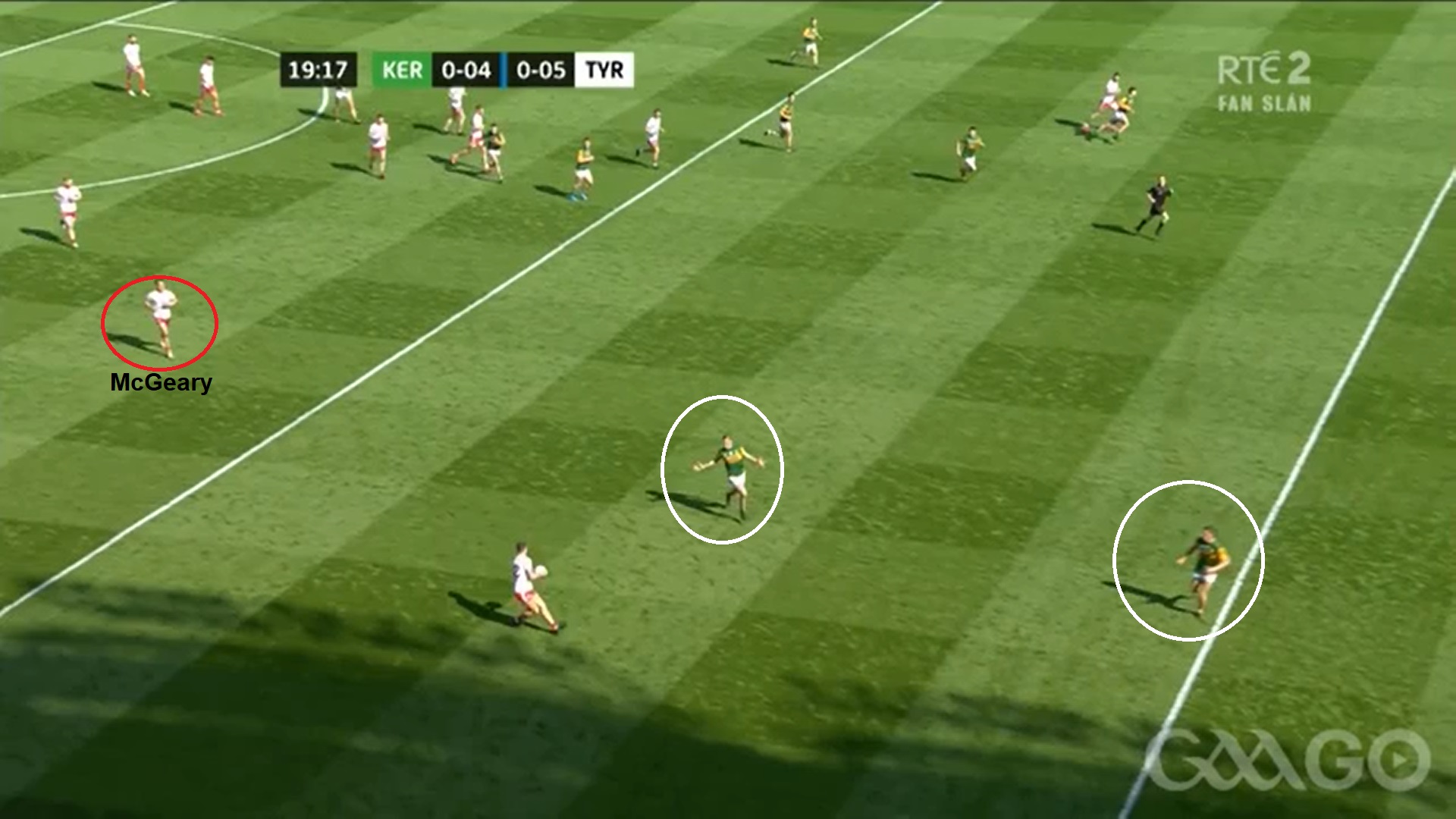 McGeary tracked the attack, and relieved pressure. He then utilised his athleticism to storm forward and inject pace into the attack. 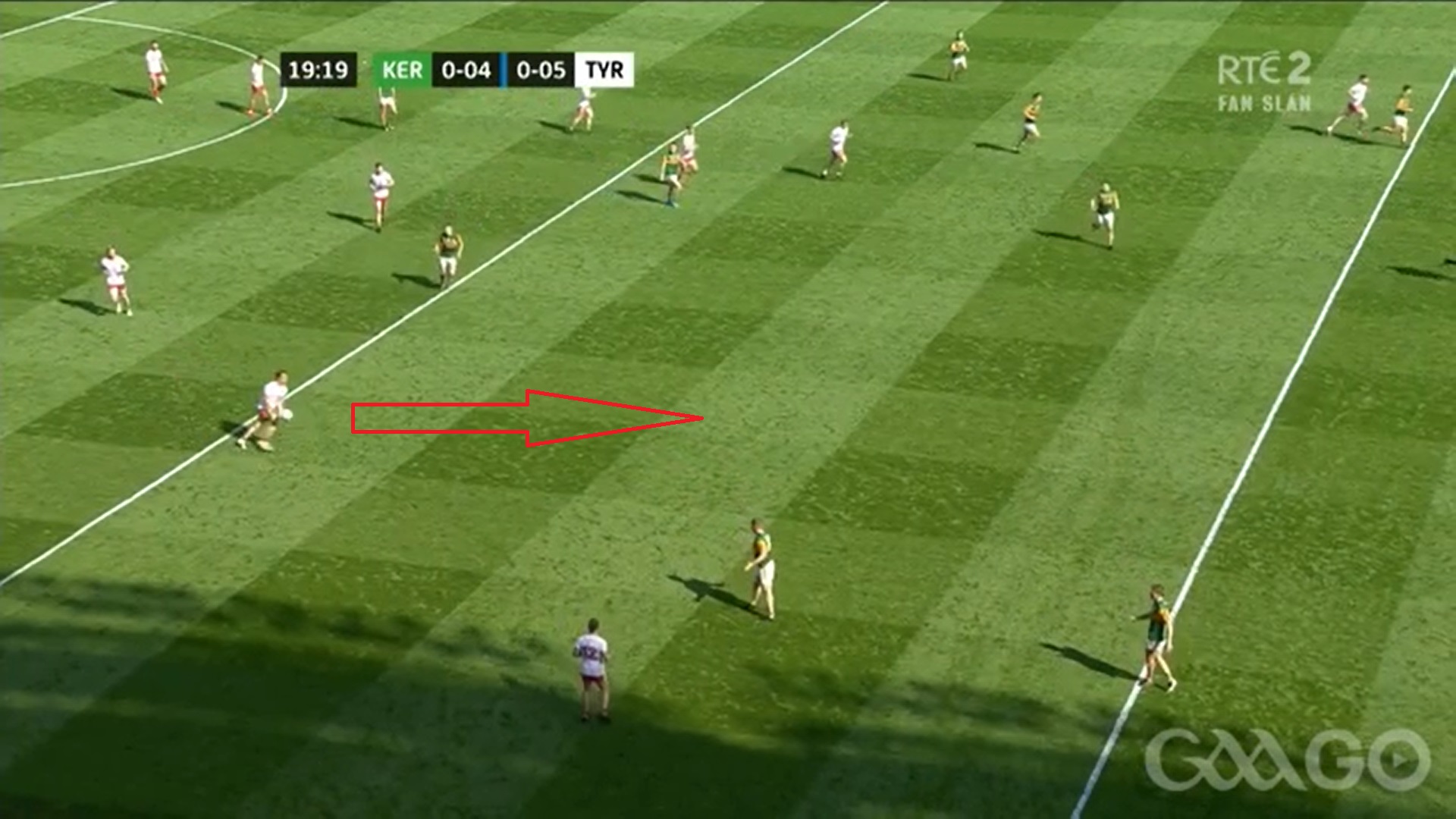 He went past O'Brien and Paul Murphy before laying off to Conn Kilpatrick. 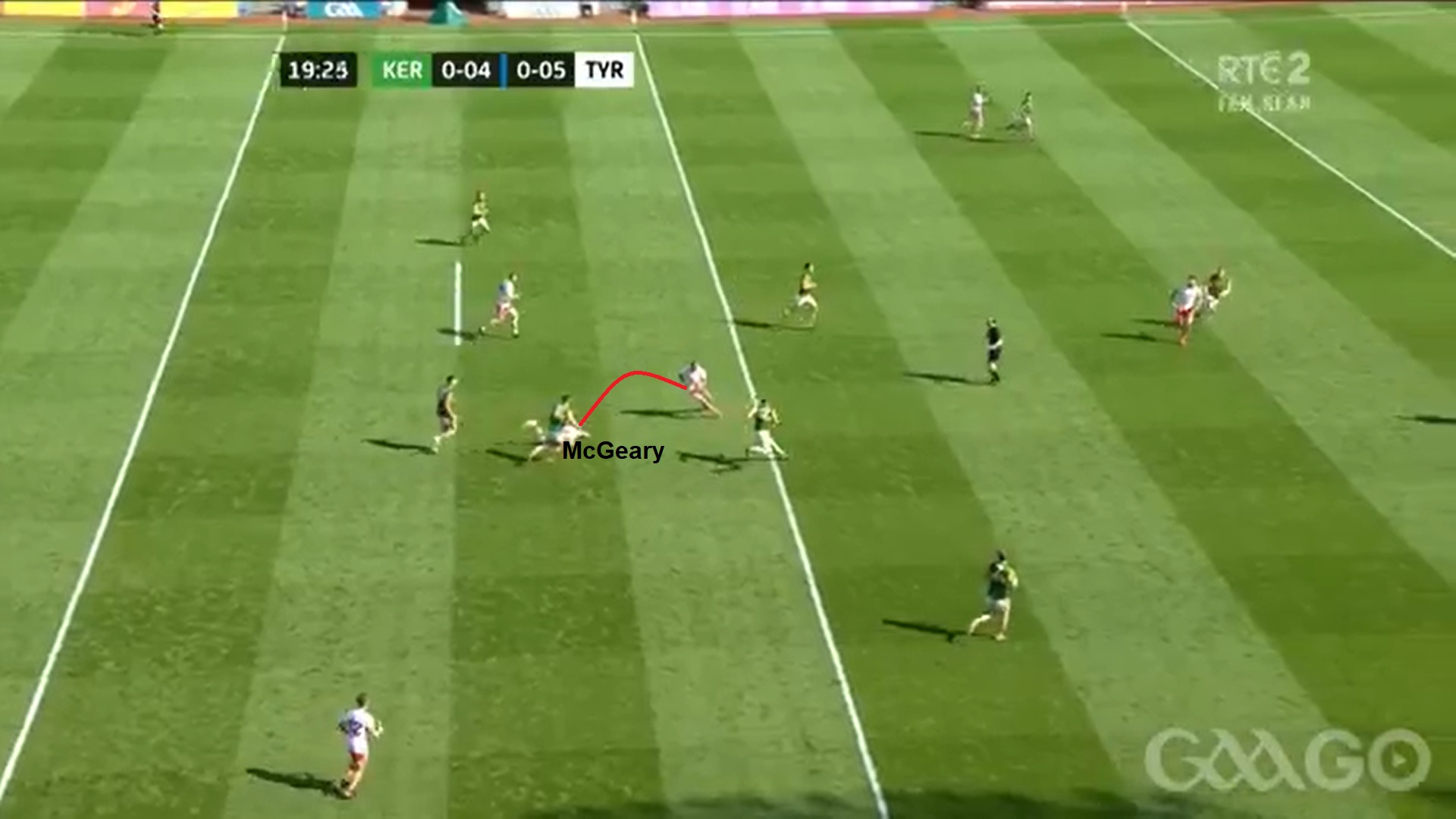 An accurate kickpass inside resulted in a promising attacking opportunity. 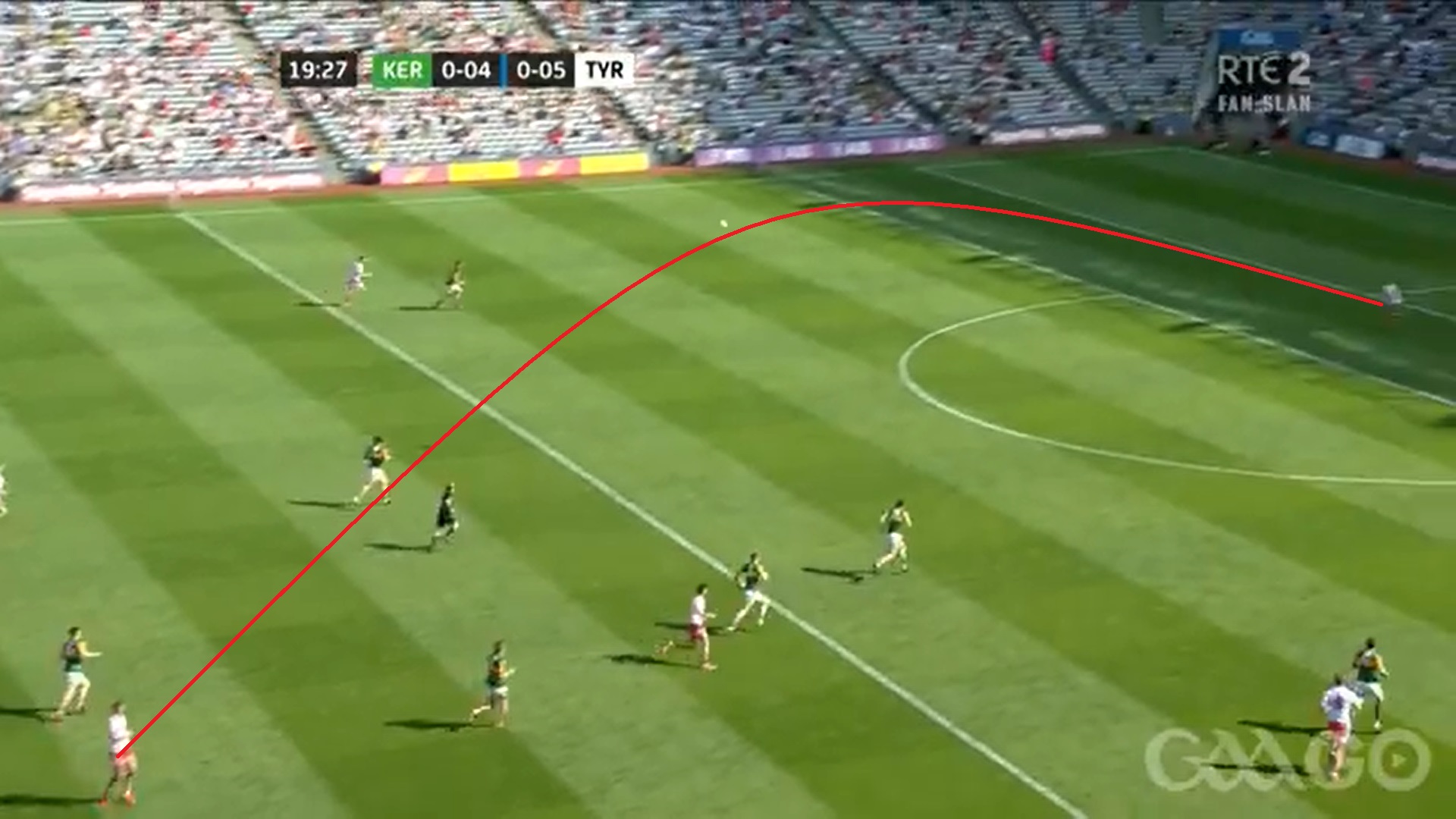 While superb, his showing was by no means flawless. McGeary has scored 0-4 in Championship so far. His shooting was off in Croke Park and he finished with three wides. McKenna's extra-time goal was unquestionably fortuitous, the result of an inaccurate floated effort and woeful defending.

Still, that play also demonstrated his capability. It started with a turnover deep in Tyrone's half. A pass fizzed across the D, intercepted by McGeary. After 85 minutes of play, he still outsprinted Kerry replacements as he started and later joined the attack. 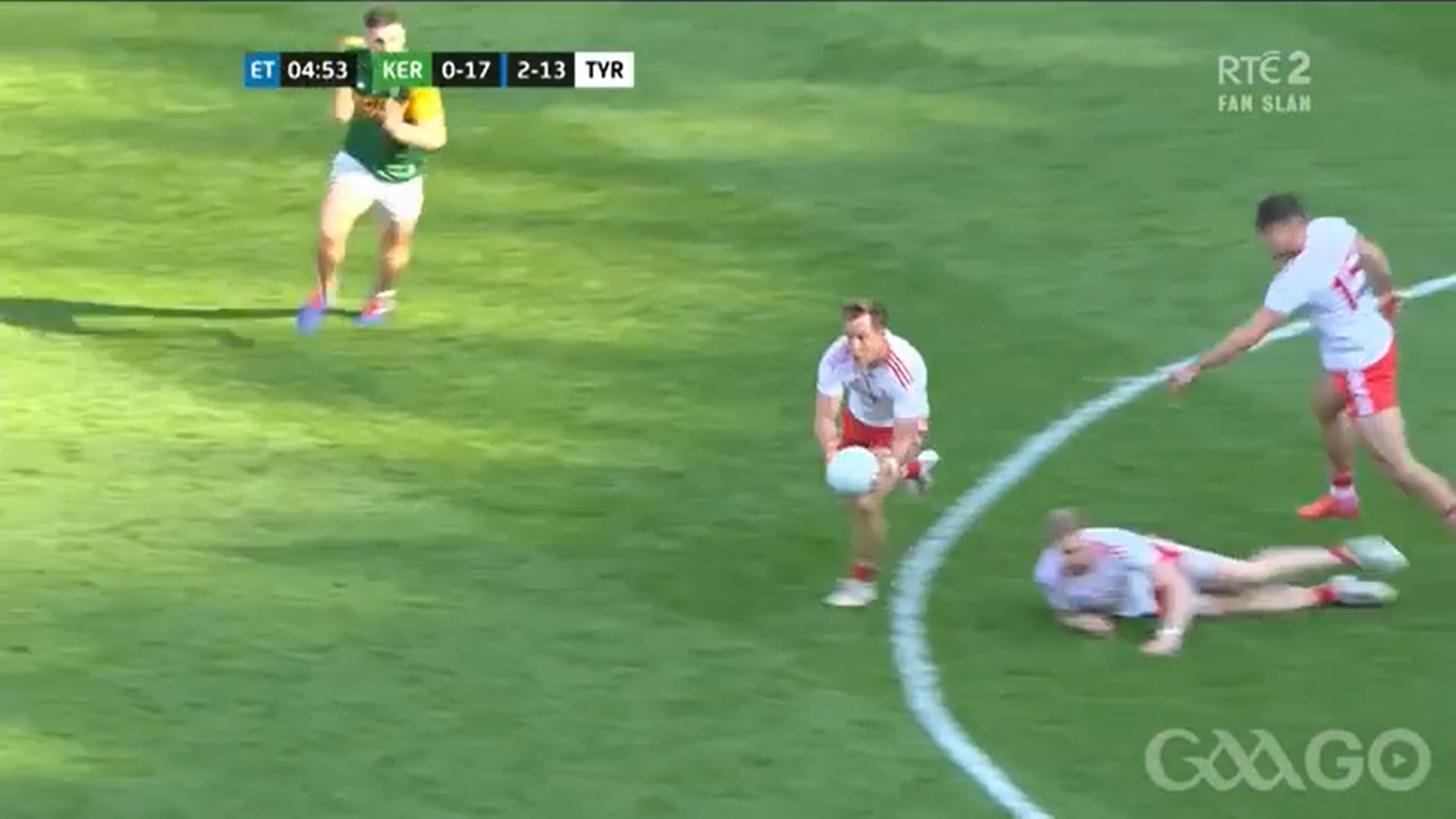 Everywhere and effective. Willing to do the unglamorous work, navigating traffic expertly, calm in the midst of chaos.

McGeary is no stranger to success. He was captain of the Tyrone U21 team that won an Ulster and All-Ireland title in 2015. He has also enjoyed Sigerson Cup triumph with St Mary's and an Intermediate Ulster club victory.

Now he stands on the cusp of his greatest achievement. McGeary is currently the favourite for footballer of the year. There is no doubt he would be willing to trade that individual honour for an All-Ireland medal. Yet his importance is such that one could guarantee the other. 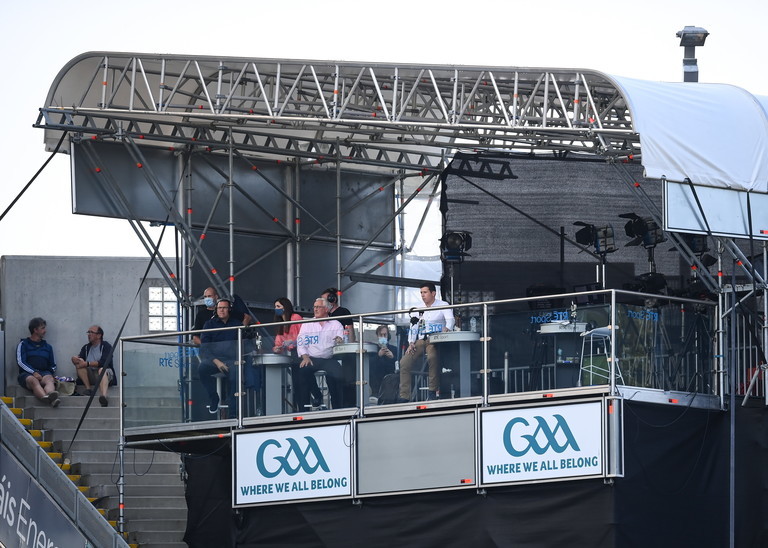 GAA
1 month ago
By Eoin Harrington
GAA: Sky Sports Reveal Lineup of 2022 Championship Fixtures
GAA
3 months ago
By PJ Browne
Tiernan McCann Decision Part Of Worrying Trend For Tyrone
GAA
7 months ago
By Eoin Harrington
Why The GPA Are Backing The New Football Championship Proposals
Popular on Balls
Golf
3 days ago
By Gary Connaughton
Padraig Harrington Glad He Didn't Have To 'Make A Decision' On Saudi Golf League
Rugby
1 day ago
By PJ Browne
The Last Munster Team To Win Silverware: Where Are They Now?
Football
4 days ago
By Gary Connaughton
Darron Gibson Was Often Mocked By United Teammates Over Bobby Charlton Advice
Football
1 day ago
By Gary Connaughton
Paul Merson Feels Liverpool's Season Can't Be A Success If They Don't Win The League