Kieran McGeeney Hits Out At Referee's Performance After Mayo Loss

It was drama and delight for Mayo in MacHale Park as they escaped with a one-point victory over Armagh in their round three qualifier clash.

The game finished 2-13 to 1-15. It was high on entertainment if not quality, but James Horan's outfit are in the pot for Monday morning's draw while Kieran McGeeney was left to rue a disappointing result. 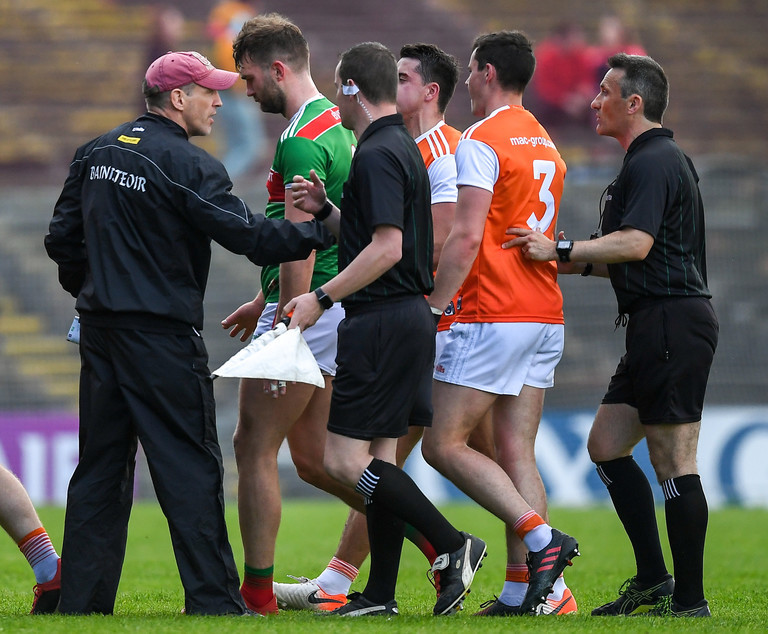 It wasn't only the result that had McGeeney frustrated post-match but the officiating as well. Speaking to Sky Sports, the Armagh boss said: "you could pinpoint one or two things but I'd probably be shot for those, I do enough time in the stands."

McGeeney went on to cite injury time and stoppages as problematic: "When you're infallible, you never learn from your mistakes. That is the best way I could put it."

We'd four minutes added time there with what, ten or eleven head injuries? That is nothing to do with Mayo or James, that's not his call. That's the man in the middle.

?️"When you're infallible, you never learn from your mistakes."

"Thankfully there is a change at the top referees now and hopefully, someone will come in and make it a two-way conversation. That's the best thing. Most of the referees out there are really good people, I've talked to a few of them and they want to move things on. Some, we'll probably never be best friends."

There were numerous contentious calls on both sides during the game. Jamie Clarke was fortunate to get away with a push in the back for a clear goal chance in the second half while Kevin McLoughlin's steps prior to his goal was a bone of contention for the travelling support.

Nevertheless, Mayo march on. A qualifier against Galway, Cavan, Cork or Meath awaits.