It's 10-in-a-row in Leinster for Dublin. In some ways, their win on Saturday night was their easiest of all. The Dubs beat Westmeath, Laois and Meath, and barely broke a sweat. A 21 point win over Meath followed holding The Royals to just 0-4 in 2019 in a 16 point victory. The 21 points is Dublin's biggest margin of victory in the provincial decider since a 23 point win over Wexford in 2008.

In the last six Leinster finals before last weekend though, Dublin have won by an average of 14.5 points. Only Kildare's 9 point defeat in 2017 got within double digits. The average amount scored against Dublin in the last seven finals, including 2020, is 10.3 points.

Dublin are also two wins away from six All-Ireland titles in a row, and eight in 10 years. It's far from just a Leinster issue. This Dublin team is the best of all time. They should be given credit for that. And they do get credit for that.

But there's also an issue about what their dominance is doing the game in Leinster. In the eight years between 1997 and 2004, Offaly, Kildare, Meath, Dublin, Laois and Westmeath all won the Leinster Championship. Since then, Dublin have won 15 of the last 16. The funding model and the inherent unfairness that exists with Dublin has all been talked about before. But in the wake of Saturday night's massacre, former Westmeath footballer John Connellan laid out the issues in a Twitter post, in perhaps the most detailed and succinct way yet.

In an extensive open letter, Connellan, who last played for Westmeath in 2018, outlines all of his concerns for Leinster football, while acknowledging his huge admiration for this great Dublin football team.

You can read the entire letter in his Twitter post above. Some of the highlights are outlined below:

Under the tenure of ex-President of the GAA, Sean Kelly (2003 — 2006), a committee was established to "rescue" the GAA within the capital. Football and hurling were under threat from other sports, socio-economic factors and a lack of investment in areas where the GAA was struggling to gain a foothold. In 2003, Dublin had not won a football All-Ireland since 1995 and had only won 3 of the previous 10 Leinster titles. Following the formation of this committee and it's ensuing work Dublin from the years 2007 — 2017 received in the region of €16,612,847 in centrally administered GAA coaching and games development funding. By contrast, the runners up in last night's Leinster Championship, Meath, during the same period received €822,647. My own county, Westmeath, received €725,501.

Within this timeframe, Dublin GAA also managed to maximise its own commercial and marketing potential. In 2013, Dublin GAA announced its partnership with American insurer, AIG, which was understood to be valued at €800,000 per year for five years. In 2018, Dublin announced that this partnership was to be extended for a further 5 years for a figure in the region of €4million. That would equate to €8million over 10 years. In March, 2018, The Irish Times reported that Ballygowan and Britvic Ireland had renewed its three year sponsorship with Dublin GAA thought to be in the region of €350,000 over the following three years. Among its other "official partners" which Dublin GAA lists on its website are, O'Neills, Mitsubishi Motors, lntersport Elverys, Kinetica, The Gibson Hotel and Gourmet Food Parlour.

None of the foregoing is to mention the obvious and natural advantage that Dublin's ever growing population provides. Aside from having a larger pool of players to pick from this presents further financial advantages. One would think, given the amount of registered players in Dublin that the ratio of coaching and games development funding allocated per registered played in Dublin would be lower than the other counties. However, that is not the case. Mayo GAA received approximately, €22.30 per club registered player between 2010 and 2014 in coaching and games development money. Tyrone received €21 and Kerry, €19. Dublin GAA received €270.70 per club registered player during the same period. The figures for smaller counties within Leinster are not known to the writer.

What Dublin have achieved with this allocation of GAA resources and its own marketing and commercial fire power is nothing short of phenomenal and credit must be given. The committee formed under Sean Kelly as President of the GAA has more than achieved its objective of "rescuing" the GAA in the Capital and sustainability has now been assured for our games in Dublin.

As a competition, the Leinster Championship is broken and this writer fears, beyond repair in its current form. It may be the case that, ultimately, drastic changes to the Inter-Provincial and All-Ireland structures together with the fair allocation of resources might not even be enough to bring football back from the brink. However, we most do something.
The ultimate conclusion that I hope you can infer from the aforementioned is that Dublin GAA is now largely self-sustainable. It is on that basis that I would call on County Boards across the country, but, more immediately in Leinster to demand a fair allocation of centrally administered GAA resources. Leinster football is, by all intents and purposes, dead. It's not dying. It is a once great competition that can no longer be considered a viable entity due to Dublin's dominance. The committee established under Sean Kelly recognised that the GAA in the Capital was under threat and it jumped to immediate and affirmative action. The GAA is failing to recognise, or, is wilfully obtuse to the fact that the GAA is, and has been, under serious threat in all of the other counties in Leinster for quite some time now. All we are asking is for the GAA to take the same action to address the threats faced by all the other counties outside the Capital which are every bit as important as those faced by Dublin GAA back in 2003.

I call on County Boards as representatives of the GAA in your counties to demand immediate action and parity. I call on players and the GPA as the players' representative body to demand change. We are year in and year out sending hugely committed and talented footballers out to run in a race in which they are starting 200 meters behind the eventual winner while on social media they are told to "train harder" and "believe more". We all owe current and future players and supporters a duty of care to address the inequity which has been created and to bring meaningful proposals to the GAA on how to address these inequities. Players across the country under the current status quo are being robbed of meaningful inter-county careers. As a GAA community, our inaction is failing them.

I would encourage all of the County Boards in Leinster to come together and discuss potential proposals to bring to the GAA. I believe that we most all be united on this front if we are to cause the GAA to take any meaningful action. Failing the GAA's agreement to make significant changes in the areas of allocation of resources and competition structures I would encourage County Boards to stop the practice of sending players who give so much to the cause of their counties to compete in a competition where they are set up to fail. The GAA have too much to lose through TV image rights etc. not to listen.

Connellan's argument, far from being a dig at the Dubs, or in any way undermining their achievements, points to facts. The facts are for the GAA to address and it's unclear why there has been such a reluctance to do so thus far. If everything was put in place to "save" Dublin a generation ago, why has there been nothing else done for their neighbours? And why, after an unprecedented period of success, has the funding disparities not being rectified? Dublin enjoy a whole host of natural advantages. It's absolutely bizarre they also benefit from artificial ones.

These arguments have been made before, of course. Accusations of "sour grapes" will follow. Likewise, a familiar refrain of 15 vs 15 for 70 minutes is probably being typed into a phone somewhere as we write. But Connellan's post has struck a chord, as did Meath's woes in Croke Park on Saturday night.

Dublin will probably still win. They've got everything in their favour, including the best group of footballers we've ever seen. But if we can't level the playing field, we need to at least stop making the hill even steeper!

SEE ALSO: Canavan Calls For Cavan Vs Dublin Semi-Final To Be Played At 'Neutral Venue' 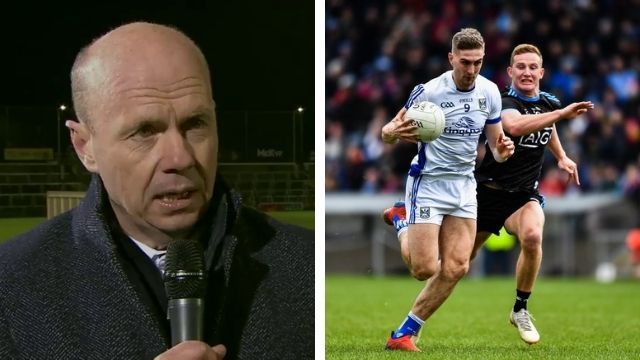 GAA
3 days ago
By PJ Browne
Meyler And Morgan Open Up About Tyrone Covid-19 Troubles
GAA
3 days ago
By PJ Browne
'They'll Know That Not Enough Of Them Came Anywhere Near Their Level Of Performance'
Quiz
4 days ago
By Michael McCarthy
Quiz: Do You Know What Year These Classic Irish Sports Photos Were Taken?
Popular on Balls
Football
12 hours ago
By Eoin Harrington
Henri Lansbury Somehow Avoided A Red Card For Wild Kick On Ryan Manning
Football
11 hours ago
By Jonathan Byrne
Wayne Rooney Emotional After Derby Win: "Staff Will Lose Their Jobs"
Football
13 hours ago
By Eoin Harrington
It Appears Brighton Fans Are Losing Patience With Aaron Connolly
35