For CL McHale Rovers, this club championship campaign has been an adventure gone long over its expected running time. When the team gathered together for training in February, the number one aim was to get back to the county final.

Nine months on, they have achieved that and more. This weekend, they face Cork side Donoughmore in the All-Ireland Ladies Junior Club Football Championship final.

"You hear the talk from years ago that there was a bit of aggro with managers being from one side and players from one side getting more game time than the others," explains captain Marie Larkin.

"This year, I keep saying it, with the amount of travelling we're doing - 30-plus girls - we couldn't be getting on better. There's no divide. It's easy enough because we go to school together and generally play at underage together.

"The Connacht final and then the trip to Manchester then for the All-Ireland quarter-final - that was great. That was a trip I'll never forget.

"It was like playing a game at home with all the support that was there. People travelled over and there were people living over there too, people who would have roots at home. They looked after us quite well with accommodation, feeding us.

"We got the bus over. Willie B brought us over. The supporters' bus travelled through the night - made it in time for the match. We travelled the day before and came home the day after.

"We met the supporters in the pub for a while after. Then they left and travelled through the night home again. It was mad but it was great. We got the result out of it as well. It was even more enjoyable." 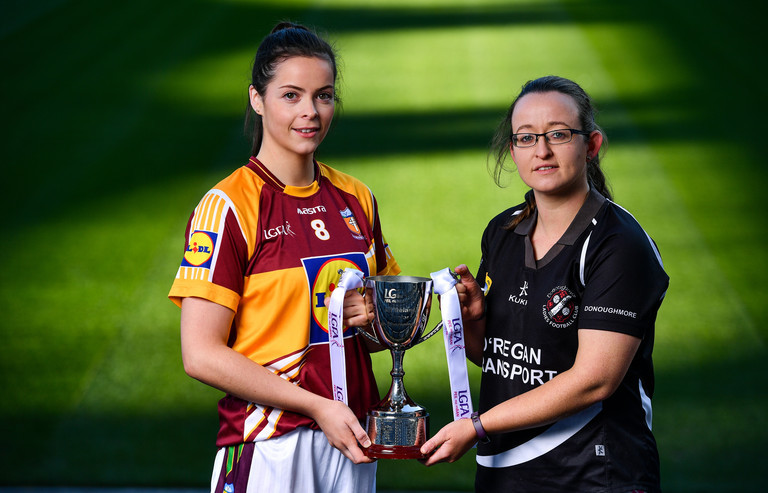 Numbers at training are now healthy but that was not the case earlier in the year.

"I live in Dublin," says Larkin, who works as a physio in the Rotunda Hospital.

I haven't made midweek training this year at all. I just about make it home for the Friday training at times. Then we try to train Sunday as well. The weekend ones are for the likes of me that are travelling.

We started on February 3rd. Back then, nobody knew what we were capable of. The belief came from somewhere and once that came, the numbers started coming out and things started clicking for us. The more we've trained together, the more it shows on the pitch. In the beginning, it wasn't easy.

One of the girls that instigated it in the beginning [Ruth Queenan] - she was always there day and night, got herself fit and was playing fullback or corner-back for us - she broke her ankle in training.

My heart goes out to her. She's still on the sideline at every single training, standing there holding herself up with her crutches and the cast on.

It's people like that who are driving us on. She would give everything to be on that pitch. She got the cast off there on Friday and part of me thinks she will be out there on Sunday.

Among their group, McHale Rovers have their own superstar: Rachel Kearns. Over the weekend, she won her first All-Star. In the All-Ireland semi-final against Tyrone side Edendork, Kearns scored 1-9 with 1-4 of the total coming from play.

"She's been incredible for us this year," says Larkin.

"She's such a threat in attack. Even for Mayo, last year she was lining out in goals and as a defender. She's definitely found her true calling at full-forward.

"We're so proud of her, thrilled for her and her family. It's nothing less than she deserves with what she's done for Mayo this year and the club as well.

"I don't think she realises it but the effect she's having on the younger`players on the team - because we have quite a young team. At training, she's telling the younger girls to carry the ball or this was good or that was good. What that means to them is unreal.

"Sure, she has caps for Ireland in soccer! She has an All-Ireland title in boxing as well. At school, she would have thrown her at basketball as well. She's one of those who will be good at whatever she does."

On Sunday, they face a club which knows highs and lows. Donoughmore won All-Ireland senior titles in 2001 and 2003 but as recently as two years ago were unable to field an adult team. With Cork legend Rena Buckley one of their stars, they are on their way back up.

"The support of the parishes is absolutely unreal," says Kearns.

"There's flags, there's bunting, there's car flags. It's nearly just as well that I'm in Dublin because I'd be gone mad if I was seeing that every day at home.

"We think we have what it takes to come out on top. The talent is there."

CL McHale Rovers play Donoughmore in the All-Ireland Ladies Junior Club Football Championship final at Duggan Park in Ballinasloe at 2pm on Sunday, November 24th. It will be broadcast live on the LGFA Facebook page.

Aussie Rules
44 minutes ago
By PJ Browne
Opponent Rang Conor McKenna To Apologise For Covid-19 Taunt
GAA
23 hours ago
By PJ Browne
Watch In Full: Down Vs Meath In The 1991 All-Ireland Football Final
GAA
1 day ago
By PJ Browne
A Kilkenny Company Is Revolutionising Hamstring Training
Popular on Balls
Football
18 hours ago
By Gary Connaughton
AFTV's Reaction To Arsenal Howler Is Everything You Hoped It Would Be
15