Distancing himself from the decision to narrow the pitch in Omagh ahead of Dublin's visit to Tyrone last month, Mickey Harte, in the immediate aftermath of Tyrone's three-point defeat, declared that it had been Sky Sports who had requested the changes to accommodate their television equipment.

A claim subsequently refuted by the broadcaster, Harte, whilst speaking to the Irish Independent, asserted that the issue is now behind him, and that he will "not [be] talking about it anymore."

Perhaps we are destined not to know the full truth of the matter, yet, if Owen Mulligan's claims are to be believed, what was initially perceived as an attempt at stifling Dublin could in fact have been a strategic plan at being match-ready for this weekend's crucial clash against Donegal in Ballybofey. 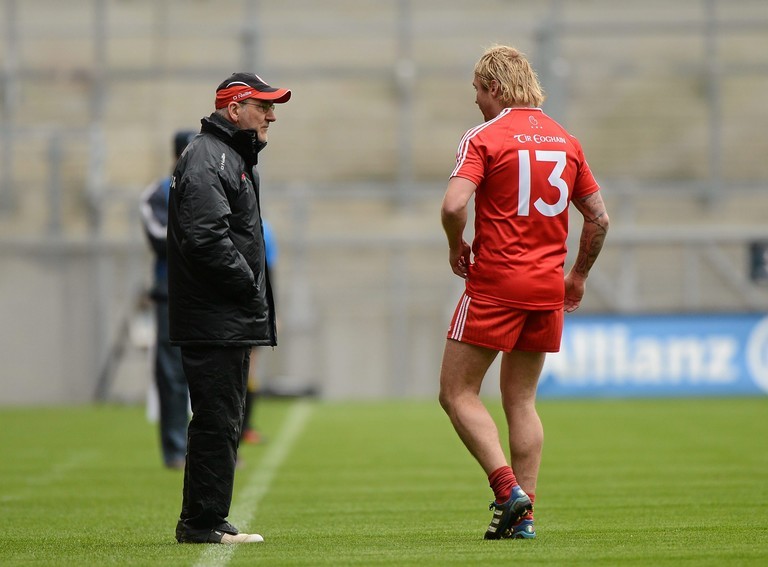 A three-time All-Ireland winner with Harte's Tyrone, Mulligan, who is a Paddy Power GAA Ambassador and columnist with Paddy Power News, revealed a rumour doing the rounds within the county regarding the narrowing of the Omagh pitch:

The whispers doing the rounds in the county are that Omagh’s pitch wasn’t narrowed for the Dubs, but to reflect the size of Ballybofey’s pitch.

That will tell you how big this game is.

Describing the atmosphere in Donegal as "hostile", and not "an easy place to go," the extent that Harte and Tyrone appear to be willing to go as they attempt to exact any and every marginal gain is admirable, if true.

Rather than attempting to unnerve Dublin, it would seem that Mickey Harte has been of the opinion that as soon as Roscommon were beaten in the first round of the Super 8 series, and Donegal were ousted by Dublin later that day, everything would come down to this final game.

Commenting on the competitive frailties of Tyrone's year thus far, Mulligan believes Tyrone's inability to overcome any Division 1 side in this year's championship will only serve to heighten the importance of Sunday's tie between the two.

GAA
5 months ago
By Darragh Small
'We Were Broken Hearted. It Hurts When You Are Losing Matches Like That.'
19

GAA
5 months ago
By Darragh Small
'We Were Broken Hearted. It Hurts When You Are Losing Matches Like That.'
Podcasts
1 year ago
By Michael McCarthy
Three Man Weave - Kerry's Pressing, Dublin Snoozefests, And Connacht Hurling Rising
GAA
1 year ago
By Gary Connaughton
Donegal Club's Ban After Fundraiser For Club Member Overturned By County Board
Popular on Balls
The Rewind
11 hours ago
By Michael McCarthy
Scenes From Dublin's First "Open" Saturday Night Have Scared The Crap Out Of People