Reflecting on his side's 1-13 to 0-15 point defeat to Tyrone in this afternoon's All-Ireland semi-final, Monaghan's Malachy O'Rourke dwelt upon what he perceived as a string of poor refereeing decisions that went against his team. Of the utmost importance to O'Rourke was the referee's decision to allot only 3 minutes of injury-time. However, on this evening's Sunday Game, the RTÉ panel have explained why referee Anthony Nolan acted well within his rights.

Although the panel of Ciaran Whelan, Colm Cooper and Donegal's Michael Murphy were far from complimentary of the job Nolan did across the entirety of today's game, Whelan outlined carefully why O'Rourke's concerns regarding injury-time - in terms of the rules, anyway - were misplaced:

The first complaint was the injury-time and the 3 minutes, and if you look at it, there were 8 substitutions, and the guideline is 20 seconds for 8 substitutions - so that's 2 minutes and forty seconds.

However, two of the substitutions took place during the minute where [Tyrone's] Peter Harte was down injured.

So, if you add the 6 '20 seconds' and the minute for Peter Harte, that comes to about 3 minutes. Technically, when you look at the rules ... he was in or around right with the 3 minutes. 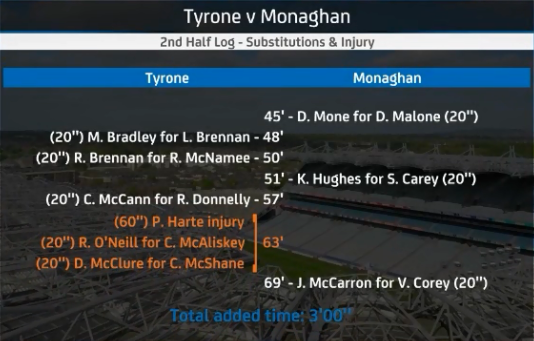 While none of those present on the RTÉ panel debated the point that most matches now contain a greater portion of injury-time, they felt Nolan's performance left something to be desired.

According to Murphy; "From looking back over the clips, and the whole thing with 3 minutes ... 3 minutes now is the very, very minimum." He did concede however that overall, Nolan's performance wasn't overly detrimental to Monaghan's hopes.