Revealed: The Best Donegal Team Of The Last 30 Years As Voted By You

After a week of fierce debate, the votes have been tallied, and we can reveal the inaugural 15 for 30 team - Donegal's best county football team of the last 30 years, as voted by the public.

We received a huge number of votes throughout the week, along with plenty of anger that various favourite players weren't included in our voting updates, despite having no say over how the voting went.

A few players were clear starters from the beginning. As you would expect, Michael Murphy, Martin McHugh, four time All-Star Karl Lacey, Neil McGee and goalkeeper Paul Durcan had comfortable places from an early stage. Others, such as Colm McFadden, romped home with a late surge.

All in all, the voting for the last few places came down to some incredibly tight calls.

Almost 60 players received votes in the end, and that's before we count the 15 unnamed Sweepers playing in every position that one voter went for. It also doesn't count the various votes for Seamus Coleman, Packie Bonner and Shay Given. We were left bitterly disappointed by the lack of any votes for Daniel O'Donnell. 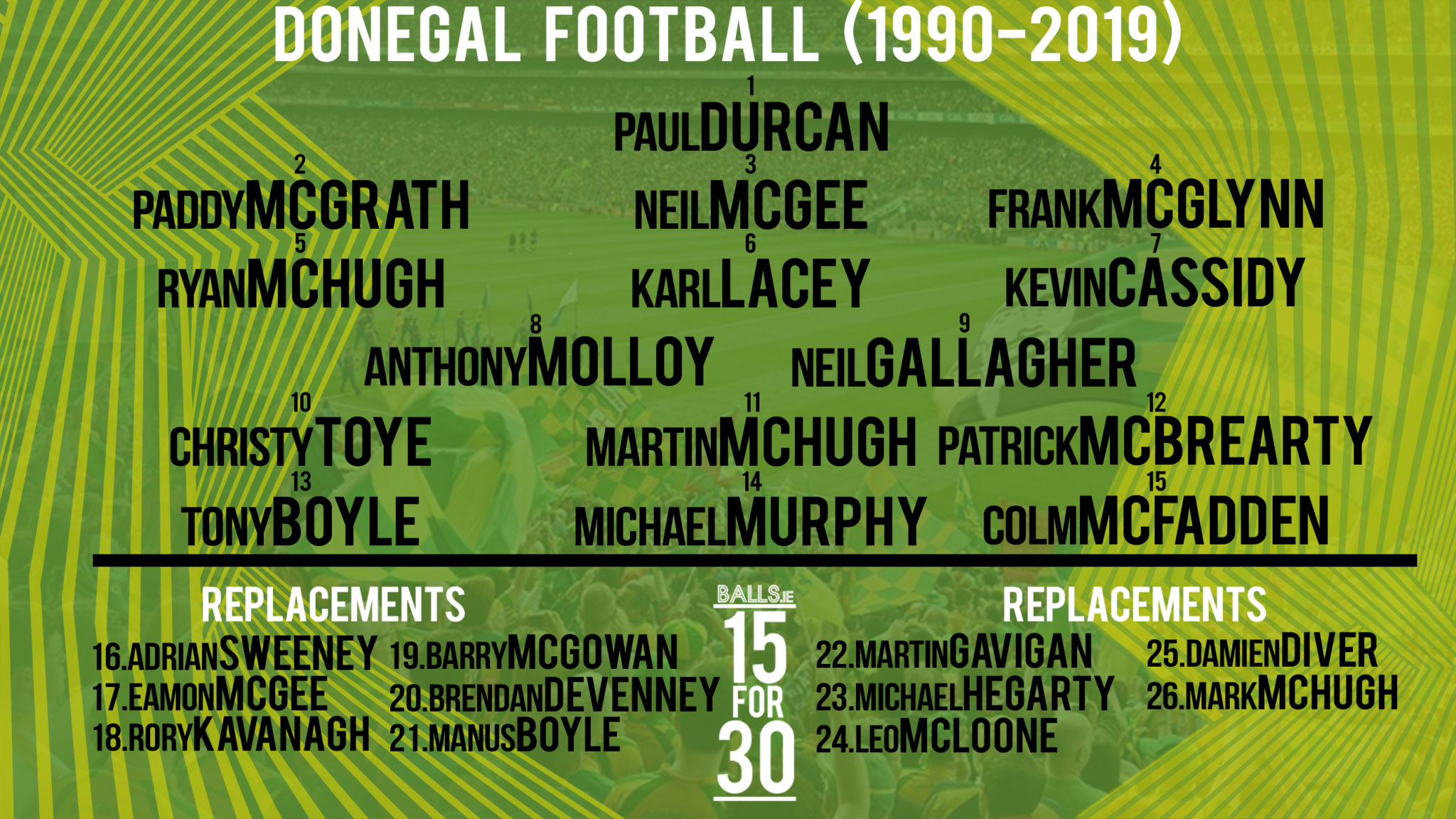 Some very close calls had to be made by the voters. 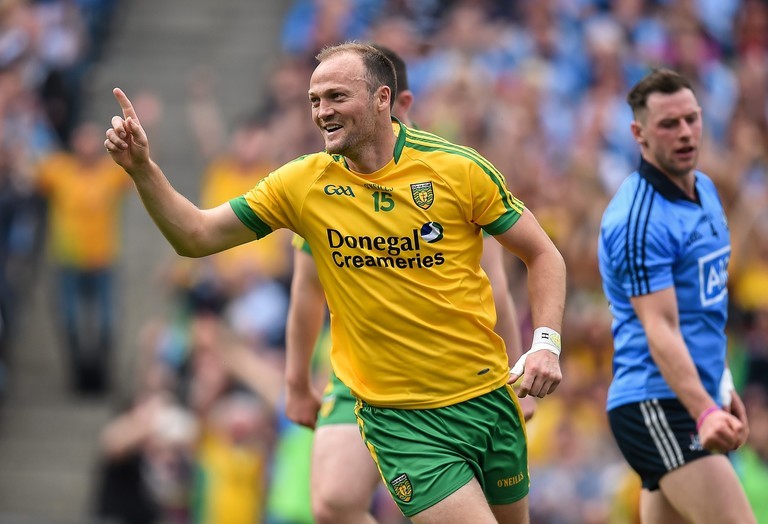 Donegal's full forward line would prove the most competitive of the poll. A huge surge for Colm McFadden in the last couple of days meant his vote number was beaten only by Michael Murphy. Manus Boyle, Declan Bonner, Brendan Devenney and particularly Adrian Sweeney received a huge amount of votes, but ultimately did not have enough. Patrick McBrearty lost out to Tony Boyle for last corner-forward position by just 24 votes in the end.

McBrearty does come into the team at half forward as his votes far outweighed those of Rory Kavanagh and other potential half forwards. We said at the beginning of the process that we would ultimately decide the team based on the most votes, as long as the team made sense. 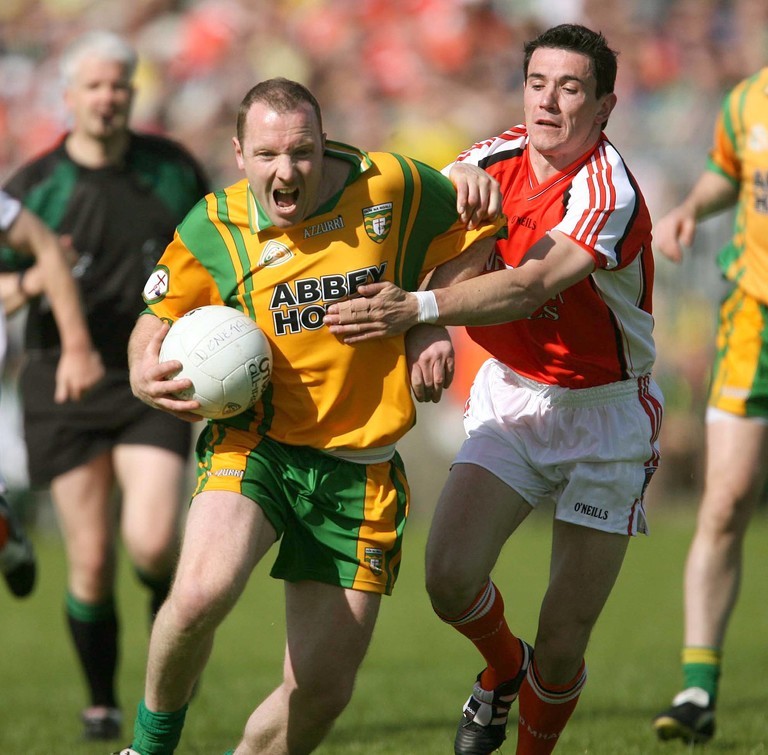 Unfortunately for Adrian Sweeney, this is where he loses out. Sweeney did receive very slightly more votes than Paddy McGrath, with cornerback being an equally competitive position, but in the end, pushing everybody back to accommodate a fifth full-forward would have done too much damage to the balance of the team.

The most surprising absentee from the team is probably Rory Kavanagh. The St. Eunan's man soldiered for Donegal for 16 years, and was a key part of the All-Ireland winning team in 2012. He lost out in midfield to Neil Gallagher and 1992 winning captain Anthony Molloy was thought a strong favourite to get enough votes to slot in at wing forward. Ultimately, he was beaten by long time comrade Christy Toye and the sheer amount of votes for McBrearty. 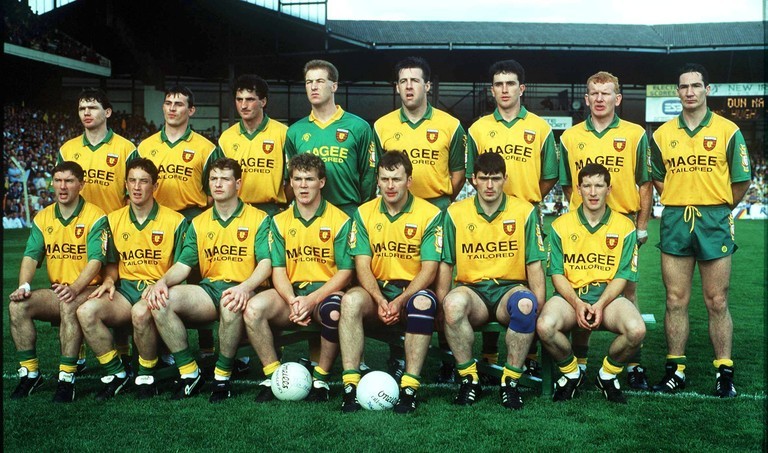 Up next, we'll be moving to hurling for the 15 for 30, and the county of Waterford. The last 30 years has seen a resurgence in Waterford hurling and some of the greatest characters we've seen in the game. We're looking forward to getting the debate going on Monday.