Kerry finally got their opportunity to take on Tyrone in the All-Ireland football semi-final on Saturday afternoon - but the real showdown of the day was in the RTÉ studio, where Sean Cavanagh and Pat Spillane had a heated argument ahead of throw-in.

Cavanagh and Spillane disagreed on the circumstances surrounding the COVID-19 outbreak in the Tyrone camp that delayed the semi-final by two weeks, and it descended into a shouting match.

The day before the semi-final was initially scheduled to take place, Tyrone announced they would not be in a position to field a team for the game due to a flurry of COVID-19 cases in the squad.

Speculation was rife as to how the outbreak had occurred, but ultimately Kerry agreed to delay the game by two weeks. Their statement on the game included a line that said, "We have explicitly followed all Covid protocols and we have taken every precaution to protect our Players and Management." On RTÉ's coverage of the game, Cavanagh took issue with that line.

.@CavanaghSean14 is adamant that Tyrone did not "flaunt the rules" in relation to the delay of their All-Ireland football semi-final with Kerry #rtegaa #kerryvtyrone pic.twitter.com/FNiwMkO7nW

That's patronising. To speculate around how someone has picked up COVID or how the players are - I know for a fact, some of the guys work for me, that the guys were sick, there were at least seven or eight players that I know that tested positive and those guys have brothers in the teams, maybe friends who travel together in cars, some who don't drive.

You're asking us as a county to respect the COVID guidelines and to isolate when they need to isolate and to respect what the rest of the country is respecting...but then we're being criticised around how we can't field a team when we've only 16 players in training.

Earlier this morning, an interview with the Tyrone goalkeeper Niall Morgan in the Irish Times revealed that the team had "had a few beers" after their Ulster final win, but that no one from outside of the team bubble had been allowed to attend.

Pat Spillane is not happy with the "vacuum of information" that he feels is coming out of the Tyrone camp in relation to the Covid-19 outbreak within the Ulster champions' squad #rtegaa #kerryvtyrone pic.twitter.com/cuNioPCJWI

When pushed by Joanne Cantwell to comment on that revelation, Sean Cavanagh again defended the Tyrone team, and that kicked off an extraordinary scrap between him and Pat Spillane.

Cavanagh: I would say if you look at any county team, there's a few guys going out after a game for sure - for me, it was a case of Kerry realising "we need a game before the final, but we know Tyrone are through the roof here." I just don't buy it.

Spillane: That's a load of rubbish, Sean, to be honest.

Spillane: A couple of things. Look, COVID is a very serious respiratory illness and player welfare is important, that's correct.

What happened, the result of the game being played today, is the best of a lot of bad choices, and I agree with replaying the game, correct.

Two things - Kerry have a reputation of being "cute hoors" and it's something we have earned over years, that tag of "cute hoor", but to be quite honest when you see another crowd acting the "cute hoor" and being even better at it than us? That was Tyrone.

I'll tell you what Tyrone did. Tyrone played an absolute blinder and called the GAA's bluff. They called Kerry's bluff, they played a game of poker, they hurled the grenade in, and the GAA blinked and Kerry blinked.

I'll tell you, you talk about anger and you talk about people not knowing facts - of course people don't know facts! Because no one has told anything! When you have a vacuum of information, as you had.

Cavanagh: Did you want Tyrone to come here with 20 players?

Spillane: When there's a vacuum of information, into that vacuum comes misinformation, false narratives, innuendo - and that's what you got. And I still have so many question marks - I'm curious, why did so many people at the one time in the Tyrone camp get COVID? Did close contacts come to the Ulster final, did close contacts go to this socialising event? Did they follow-

Cavanagh: Whatever teams are in-

Host Joanne Cantwell then cut across Spillane to implore him to give Cavanagh a chance to respond. It was an impassioned rant from Spillane, but it wasn't over yet as the Tyrone man Cavanagh came back firing.

Cavanagh: There's 35 players sitting in the changing room right now under that Hogan Stand. In the Ulster final, there would have been 30 players sitting there from Tyrone. There's a chance that they might have been close together, of course there is!

Cavanagh: Jesus, ye are great, ye are all great.

Spillane then went on to question whether it would be fair to expect spectators to be vaccinated if Tyrone's players had reportedly not received any doses of the COVID-19 vaccine themselves. The exchange descended into a shouting match, with the two turned square towards each other as they continued to disagree.

Cavanagh went on to claim that "most of" the Tyrone camp were vaccinated, claims that would seem to contradict those made by the Tyrone manager Feargal Logan just a few weeks ago.

When Joanne Cantwell attempted to take control of the conversation, the shouting continued, until the two were eventually convinced to calm down and begin discussing the game.

Perhaps Sean Cavanagh and Pat Spillane's tribal Tyrone and Kerry blood came through, but their argument on RTÉ made for spectacular viewing either way.

And, 10 minutes in, Dub Ciarán Whelan finally got to contribute, with the final words:

If it's as tense out there as it is up here, it'll be brilliant! 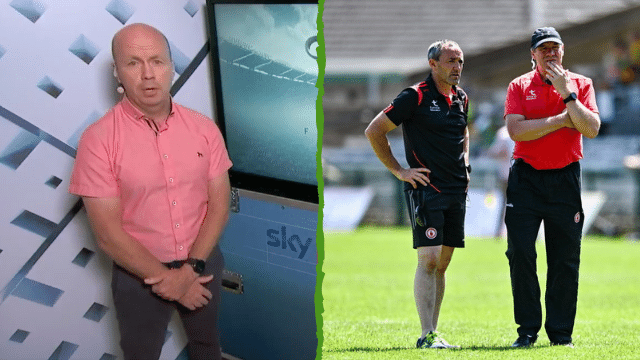 GAA
42 minutes ago
By PJ Browne
'It Was A Division 3 Game. The Tipperary Fullback Was Wearing Glasses'
GAA
3 hours ago
By PJ Browne
Marc Ó Sé: Kerry Will Win Sam, And They Should Have Won It Last Year
GAA
1 day ago
By PJ Browne
McHugh Wants To See Young Finn Harps Player Get Donegal Shot
Popular on Balls
Football
2 days ago
By PJ Browne
Ireland's Lee O'Connor Says It Was An 'Easy Decision' To Leave Celtic
Football
1 day ago
By Eoin Harrington
Quiz: Name Every Player To Score In A Champions League Final
Rugby
1 day ago
By Colman Stanley
Roy Keane Made Quite An Impression On Eddie Jones And The England Rugby Team
52