"Have we ever seen a full-back line like them?"

Speaking on RTE, Anthony Daly could scarcely believe the defensive display he'd just witnessed in the Gaelic Grounds. One man, in particular, was hailed for his awesome ability.

"Sean Finn! He's one of the front runners for hurler of the year!"

The 23-year-old is already an All-Star, All-Ireland, Allianz League, double U21 All-Ireland and now Munster championship winner. The only silverware absent from the mantlepiece is the PwC GAA/GPA gong. 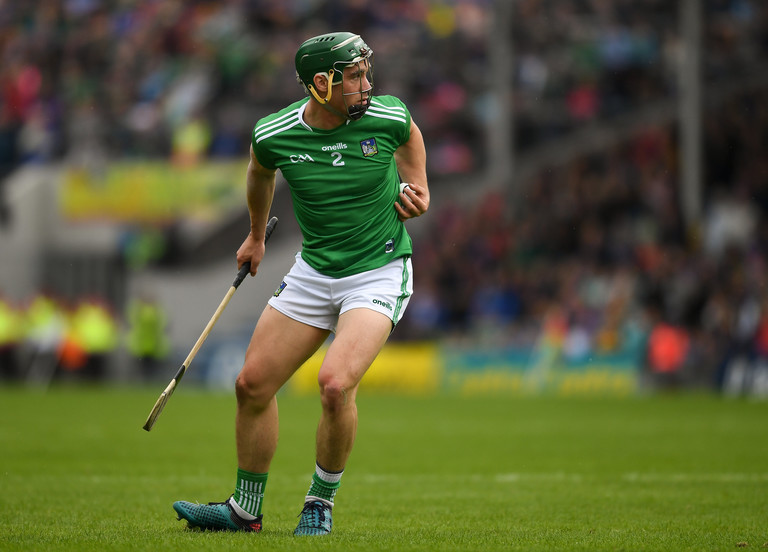 He would be the first back this decade to do so. Not since Tommy Walsh in 2009 has a defender won the award. Beyond that, you have to go to the two in quick succession as Seán Óg Ó hAilpín and J. J. Delaney collected the accolade in 2004 and 2003 respectively.

It's no real surprise that two of those three are Kilkenny hurlers. With incredible regularity, their defenders demonstrated the art manfully. A huge amount of that is thanks to former Laois footballer Mick Dempsey, as Jackie Tyrell explained in his autobiography.

"Football concepts and tactics have long been imported into hurling but much of that modern process began with Mick. It was subtle but effective.

We placed more emphasis on collective defending but much of that tactical shift was still shaped from moulding our bodies into becoming effective and efficient human wrecking balls. He coached us to get closer to the man in possession and block him with your body. The more bodies around the man, the better.

Tracking runners and shutting down space around the D were basic principles of defending but Kilkenny were able to carry those duties out so effectively because Mick had us so well conditioned to do so. And the stronger we got, the easier we found it to savage the opposition in the tackle.

Mick’s greatest strength was noticing something we were weak at and then devising a drill to ensure an improvement in that area. You could really see his football background in those drills. Our support play became an important part of our style. He always wanted more engagement in the play from players off the ball.

Limerick's version of Dempsey is former Limerick footballer Paul Kinnerk. Different codes, similar principles. Calibrate, close, contact. The former Clare coach was enticed to the Treaty County by John Kiely after he helped deliver on All-Ireland with Davy Fitzgerald. Along with strength and conditioning coach Joe O'Connor, his fingerprints are all over this current crop.

Finn exhibited all the attributes necessary for a cornerback on Sunday. Collectively, Limerick's intense pressure disrupted Tipperary and unsettled what has been a smooth-sailing forward line. It was apparent after 20 minutes, as Michael Duignan outlined on commentary.

“Tipp' had very few wides all Championship but they've seven already this afternoon, they haven’t their shooting boots on. They are under way more pressure, that less time on the ball makes some difference. That split second.”

He'll be disappointed with Tipperary's goal but Finn's overall showing was sensational. Part of what the Bruff man does so well is his versatility and decision-making. In the air, on the ground or in close quarters, he'll mix it whatever way the opponent wants.

He started as Limerick's closet defender to goal, minding Jake Morris at the edge of the square. 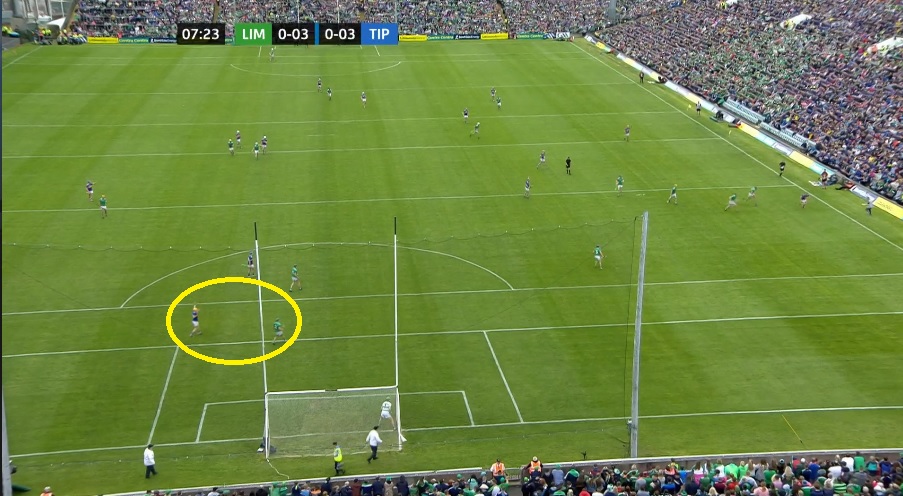 Tipperary first tried to pump ball down his throat, but Finn managed masterfully.

Tipperary win a break in midfield and immediately look to deliver it in towards their dangerous full forward line. 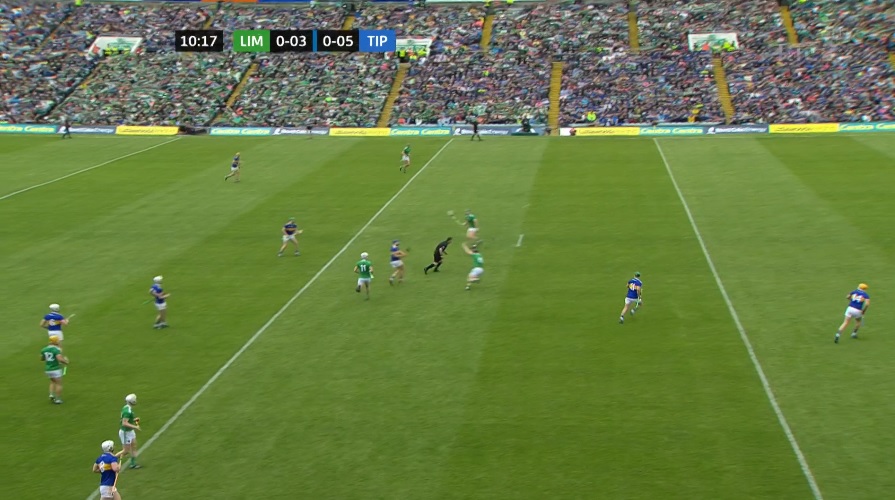 Finn breaks the ball forward, into his own path and away from Morris. He's now got the upper hand as he is facing out the field and the sliotar. 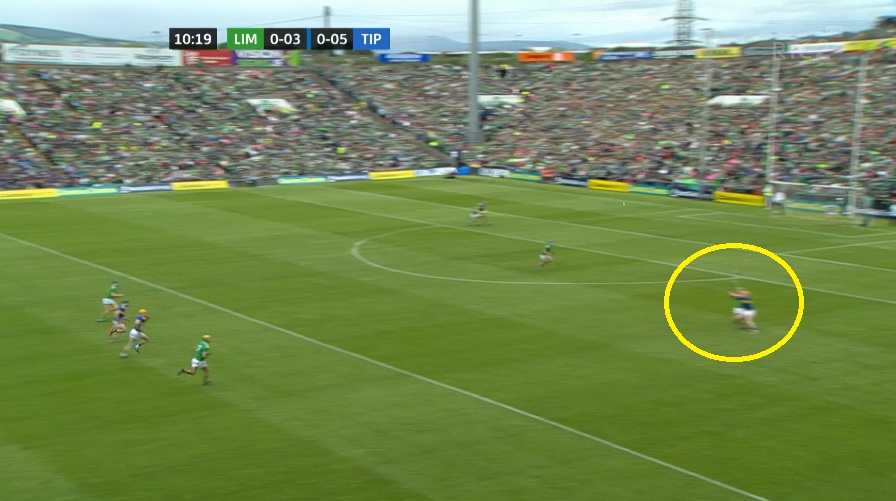 Morris panics and fouls him. 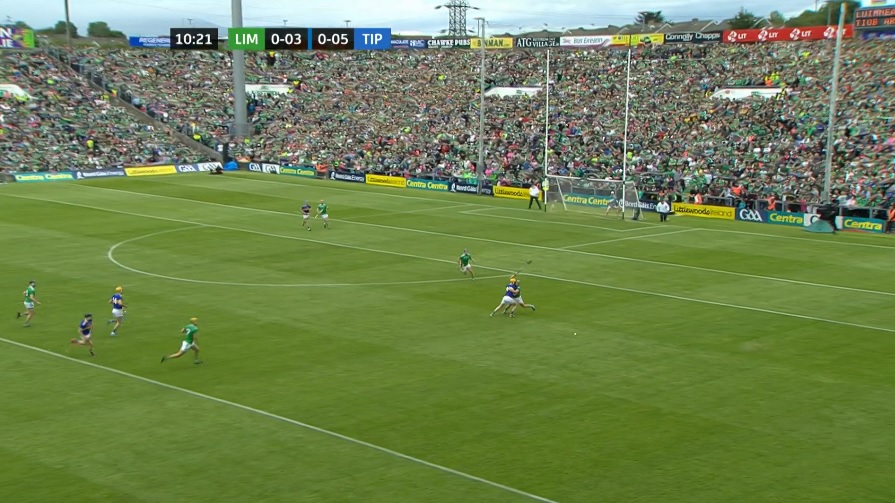 A huge contributor to Tipperary's remarkable results this year has been their forward rotation and movement, with coach Eamon O'Shea getting a lot of credit for that.

In the second half, Liam Sheedy's side tried to adapt and isolate Jason Forde on Finn, delivering a low ball with pace to the wing.

Over five yards, Finn roars out in front. 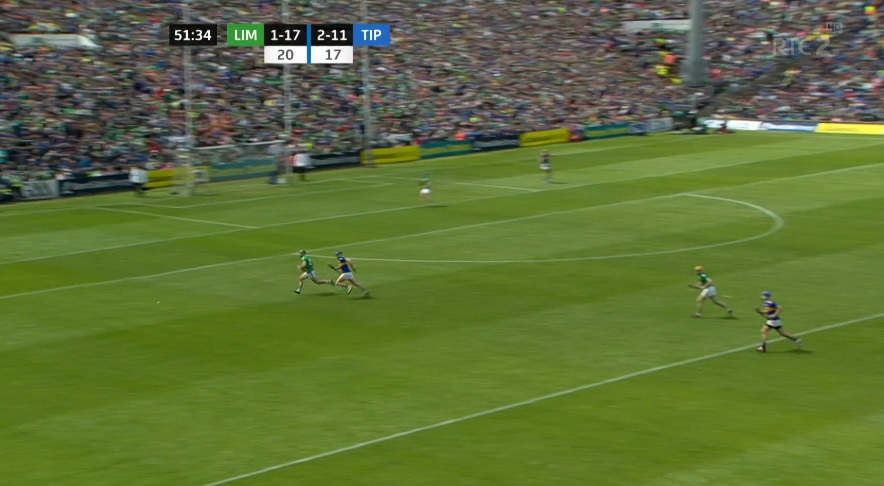 He gets to the ball first and typically delivered an accurate, understated pass out the field. 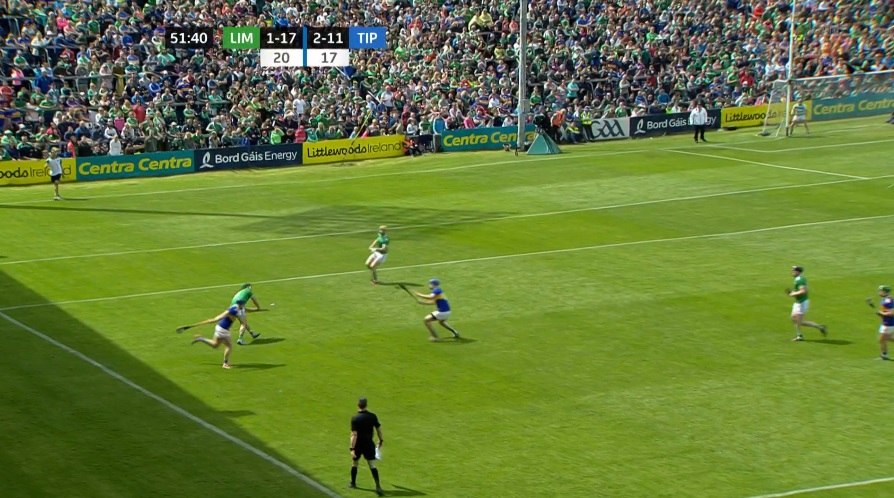 Eventually, Finn found himself marking Séamus Callanan. His second-half block is the final crucial example of the "principles of defending" that Tyrell wrote about.

There are few hurlers more deadly with the ball in hand close to goal as Callanan is. Yet that's the challenge that was facing Finn after a slight slip meant he was scrambling to cover. 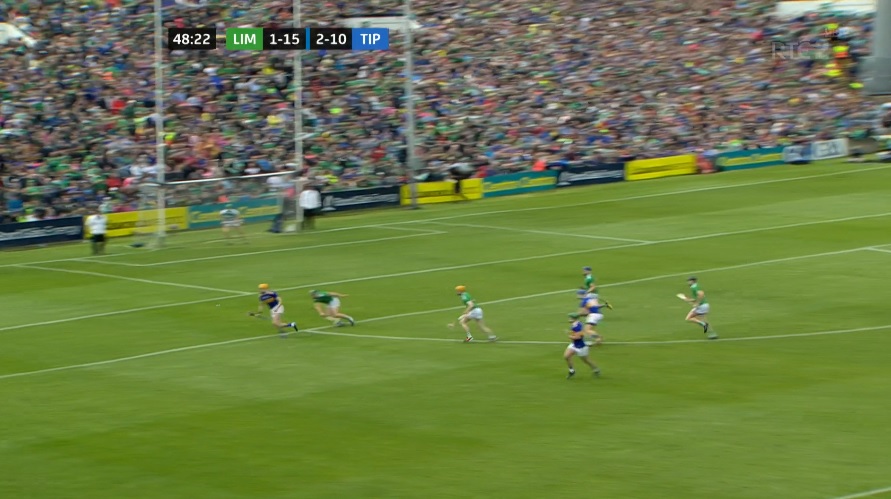 Tyrell: "Get closer to the man in possession." Finn, check. 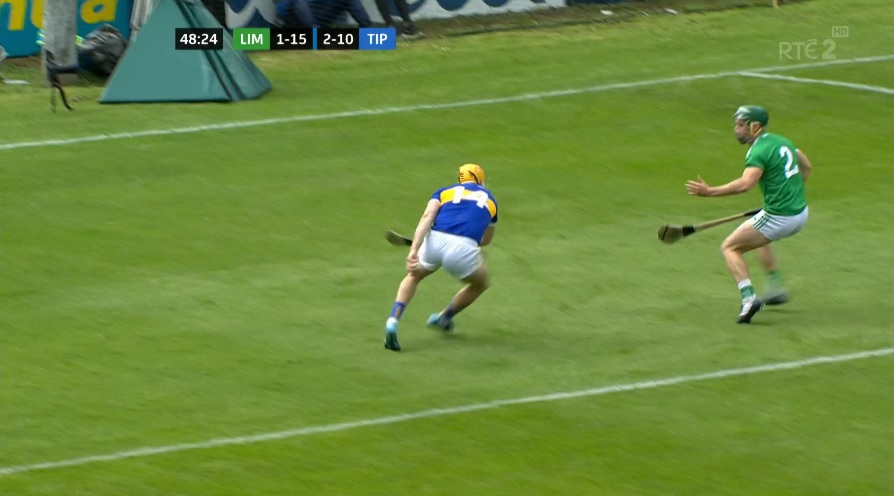 Tyrell: "Block him with your body." Finn, check. 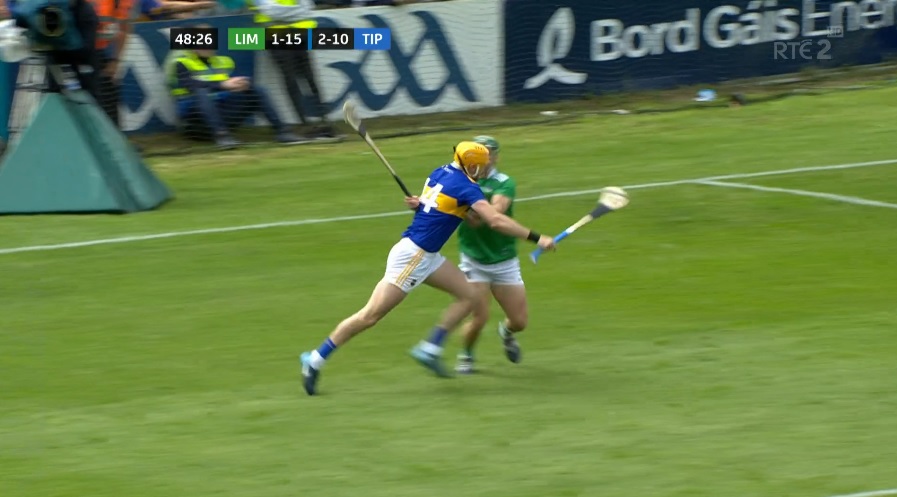 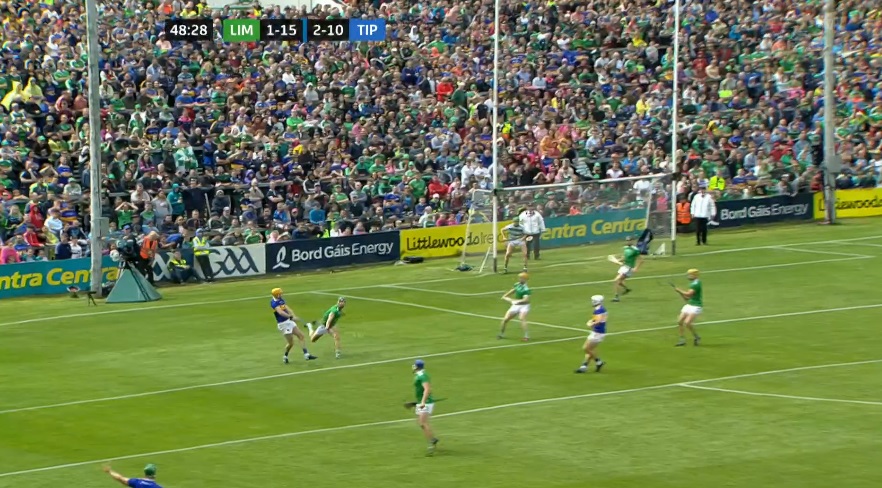 Finn marked four different players at different stages of the game as well as operating as the 'sweeper' or free man as well. Even in this aspect, he excelled.

A man well-familiar with the pros and cons of a sweeper system is Clare hurling star, John Conlon. The dynamic full-forward has experience of overcoming and being frustrated by sweepers. Thus, he's an ideal man to articulate how it should be done. 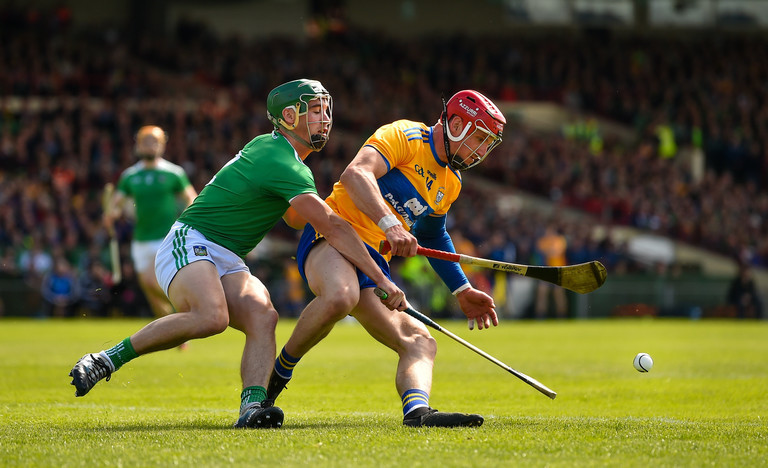 Speaking to Balls.ie, Conlon explains that it's about brains as much as brawn.

You need to cut out and read the game, to help out the defence. Especially when you have a sweeper, a cornerback just needs to get it down and get it to ground. I would have been very critical of the Kilkenny sweeper, Padraig Walsh.

Wexford targeted hitting the ball down the middle. That's where Padraig Walsh can't be going up for the high ball, that's what Wexford want him to do. He needs to read the break.

"The sweeper needs to protect the D and be 25, 30 yards out cutting out those deliveries. Getting to the breakdown and covering the goal threat."

Compare and contrast Walsh with Finn.

Conlon outlines that Walsh's error wasn't in terms of endeavour but understanding: "He was too deep, he was nearly in behind or alongside the full-back. You must be the man sitting five, ten yards in front of him. Cutting it out or getting the break."

Rory O'Connor's score after 11 minutes illustrated as much.

A long ball in finds O'Connor racing out. 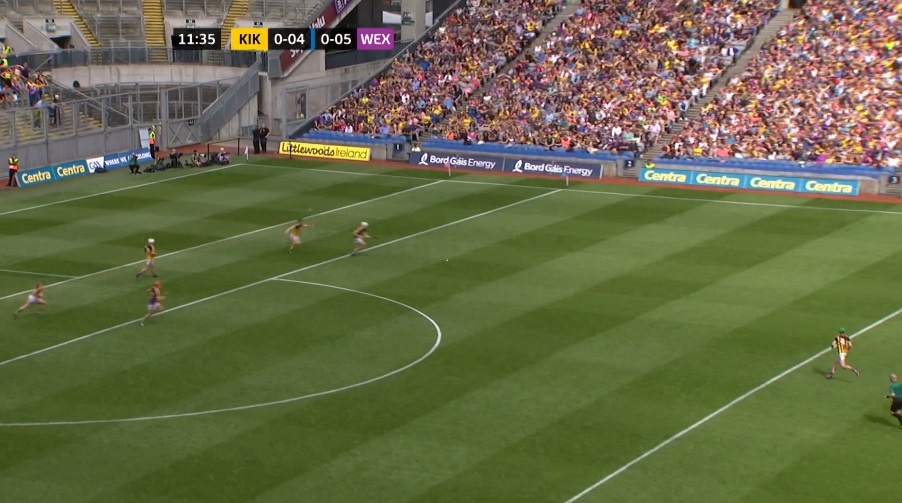 Walsh is behind the play, unable to engage the attacker or intercept the ball. 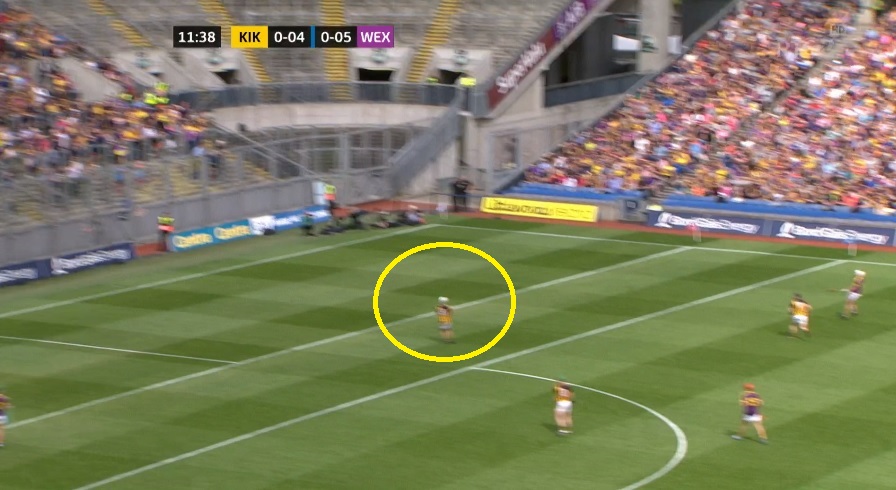 Out of place and ineffective. Finn's contribution in a similar situation was the polar opposite.

Tipperary deliver a long ball in, Finn is currently double-teaming on the right. 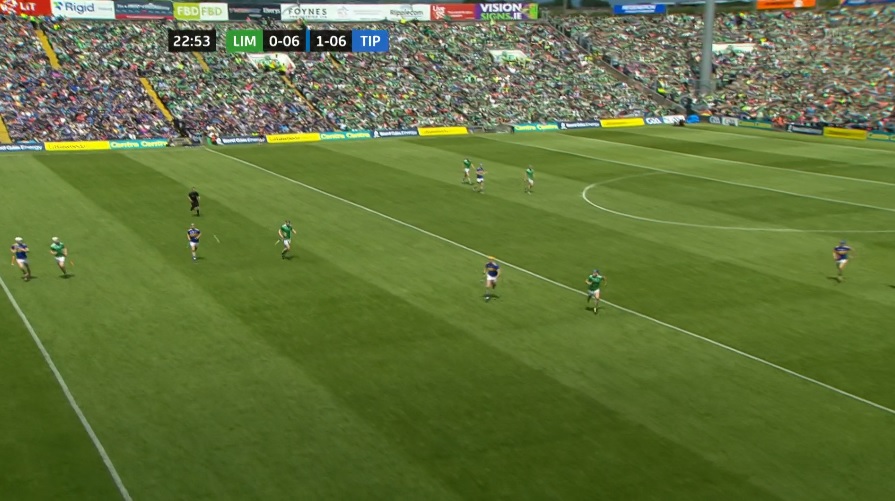 He reads the situation, spots the danger and moves to the edge of the D. 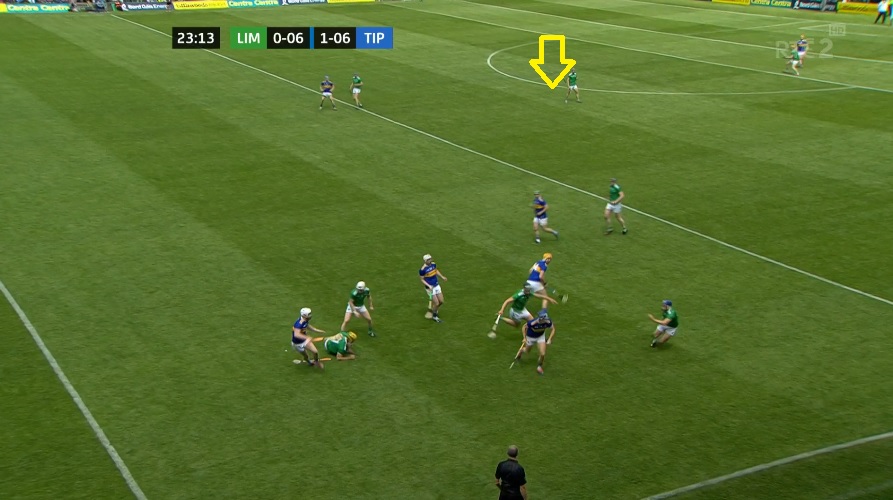 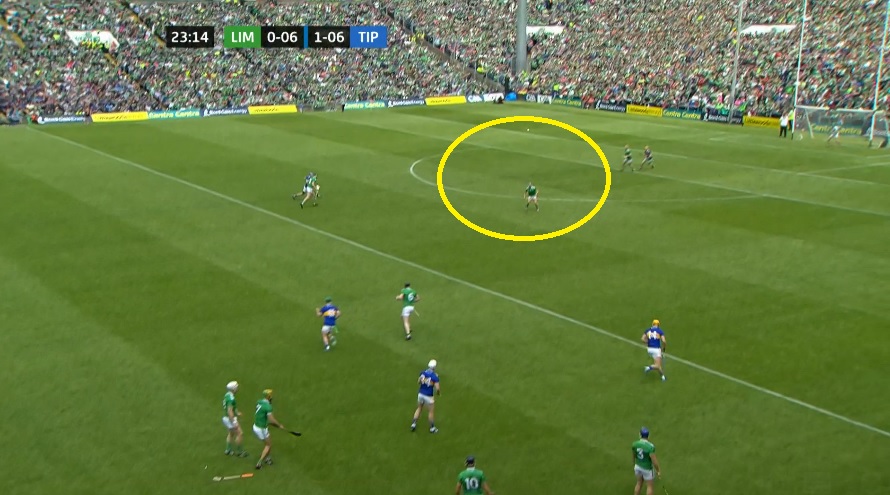 Low or high, sweeping or sniping, Sean Finn can do it all. Further out the field, Limerick have an embarrassment of riches, but there's a series of gems minding the house too.

GAA
1 week ago
By Michael McCarthy
Watch In Full: Limerick Vs. Kilkenny In The 1973 All-Ireland Hurling Final
Previous Next

GAA
3 days ago
By Michael McCarthy
15 For 30: Vote Now For Your Best Clare Team Of The Last 30 Years
GAA
6 days ago
By Gary Connaughton
TG4 Announce Return Of Live GAA With Two Cracking Fixtures Next Week
GAA
1 week ago
By Michael McCarthy
Watch In Full: Limerick Vs. Kilkenny In The 1973 All-Ireland Hurling Final
Popular on Balls
GAA
18 hours ago
By PJ Browne
Former Cork Footballer Kieran O'Connor Has Died Aged 41
22