Terence 'Sambo' McNaughton has spoken publicly for the first time about the abuse which he suffered as a child due to a speech impediment.

The former Antrim hurler's life on and off the pitch is the subject of the first episode of the new season of TG4's Laochra Gael series.

"I've never spoken about this before, ever," an emotional McNaughton, who hails from the Antrim village of Cushendall, says in the programme which airs on TG4 at 9:30pm on January 13th.

"It's just brought up old feelings. It was horrendous. It was a form of abuse. At no time in history should you treat a child like that.

"School wasn't a happy place for me. Primary school definitely was a waste of time. I had two types of teachers: The ones that wanted to batter the speech impediment out of me, and the ones that couldn't deal with it, and ignored me.

"One teacher used to lift me [by my ear] and the blood would be running down your ears, used to stand on your toe. I remember going home with my shoulder all black and blue from punching you in the shoulder, telling you to stop stuttering.

"School wasn't a happy time for me. It just brings back memories, very few good ones. One of the teachers just made me sleep in the class, didn't know how to deal with me. Other teachers just wanted to beat it out of you. That was the world we lived in. They got away with it.

"My kids today love school. I never had that experience. I always felt that school made me isolated. It was never inclusive for me. I was always an outsider, for different reasons, especially the speech. The speech made me an outsider, and the school made sure I stayed an outsider.

"I never went in to a shop and asked for sweets. I never asked a girl out in my life. I had no self-confidence. I had no self-esteem. I felt, basically, useless in school. I was the dumb one in the class.

"Every Monday, I had to stand outside the primary school, and wait for the special needs bus and get on that. You can imagine the slagging and banter going on. It was horrendous, the feeling of not belonging to anything. Out of the five days of the week going to school, I would have cried four days for my mother not to send me.

"Some of the things that were done... The beatings that I got... Standing in the front of the class with the teacher telling you to read, you stuttering, and him standing hitting the back of your head with a book, 'Stop stuttering, stop stuttering', and the whole class laughing."

Hurling was McNaughton's only refuge.

"You always worry, 'Is this me for the rest of my life, not being able to communicate with people'," he says.

"It's probably the main reason I enjoyed hurling so much because there was no real communication in it. You could go and take part, and no one cared if you could speak or not.

"By the time I got to secondary school, I was unteachable. I had no homework, so I went home and lifted a stick, pucked the ball against the wall, and that was my life.

"It was the only thing I was half decent at. I can mind being a sub on our U14 team, and one of the managers saying to the other, 'We'll not put him on. He'll never play senior hurling anyway'. Within two years, at 16, I was in the senior team.

"At 16, we won our first ever county title. I won an award that our club never won, I won the North Antrim Hurler of the Year, which was a big thing back then. I had to go to school the next day and everybody celebrated for weeks. I was on the county senior team at a very young age. I played minor, U21, and senior all at the same time.

"It all happened very fast for me. It felt good to me, it felt good getting that respect. You became a confident human being going forward. The only place that I felt worth was on the hurling field."

Aged 24 in 1989, McNaughton - a member of the Antrim team which reached that year's All-Ireland final - was named Ulster GAA Personality of the Year. He was called up on stage to accept the award, and had a microphone placed in his hand.

"When he got up and made the speech, I was just so proud, seeing where he had come from, and where he was then," says his wife Urusla.

"He was never going to stop until he was able to talk properly, and get over that hurdle. He was a different man after that."

McNaughton adds: "I was starting to become more confident and have more belief in myself as a person, not only as a hurler, but as a human being.

"[The speech impediment] made me who I am, and I'm happy with who I am. The old saying goes, 'You've got to like the guy that you see in the mirror'." 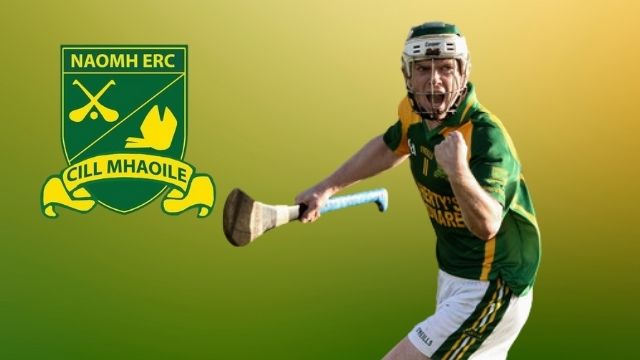