Where did it all go wrong for Galway?

Pádraic Joyce's side looked to be cruising to a Connacht title during this afternoon's final against Mayo, thoroughly outplaying their opponents in the opening period and carrying a five-point lead into the interval.

However, after we saw some unsavoury scenes in the tunnel at the end of the half, both sides had their fortunes flipped after the game resumed.

Matthew Ruane with a superb run and goal for @MayoGAA in the Connacht Senior Football Championship Final! #GAANOW pic.twitter.com/An5Sr6zNQ1

Serious questions will be asked as to how Galway were so flat in the second half, with Tomás Ó Sé believing that their manager will be very unhappy with what he saw from his team.

Speaking on The Sunday Game after the full-time whistle, he said Joyce will be 'disgusted' with how his side failed to capitalise on their early momentum in the game.

In the ten minutes I started counting, (Galway) got three our of nine on long kick-outs. They were absolutely decimated there. [Matthew] Ruane and all the key guys got into it.

I think Pádraic Joyce will be disgusted that there was such a flip, a complete opposite to what it was in the first half. The injection was gone out of it, it was very disappointing and they moved fellas around.

Mayo just didn't allow them to breath. They smothered them from every angle.

Mayo will look at the first half and say if they come up against another team who possibly will match them in the second half, like Galway did in the first, they could be in a bit of bother.

But I think Mayo are in a great place going into the semi-final.

This is the second consecutive year that Galway have come up short against Mayo in the Connacht final, although they have admittedly somewhat unlucky that the lack of a backdoor system has seen them knocked out the championship on both occasions.

Speaking after the game, Joyce said it was difficult to understand how things went so wrong in the second half.

We are bitterly disappointed, it is hard to put your finger on it when we were in a great position at half-time - five points up and ended up losing the game by six points in the end, it could have been a lot more.

It is very disappointing, hard to put your finger on in the second half where it went wrong for us.

Back to the drawing board.

SEE ALSO: Unsavoury Scenes As Brawl Breaks Out At Halftime In Galway-Mayo Clash 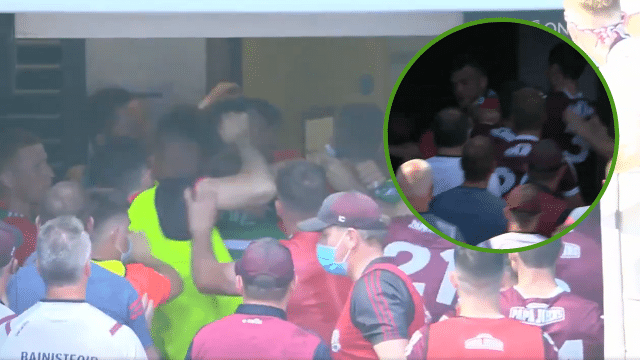