Watch: Phenomenal Michael Murphy Back To His Best For Donegal

Donegal's hopes of an All-Ireland semi-final took a hit with the loss of Patrick McBrearty and Eoghan Ban Gallagher, but one man's outstanding form could be enough to see them through. The outstanding Michael Murphy is back to his best. 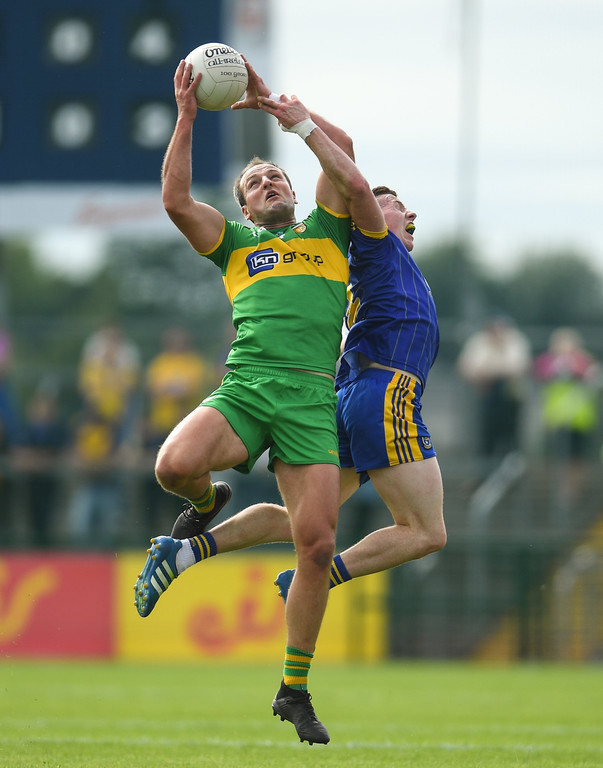 Murphy endured a frustrating 2017 with problematic knee and groin injuries. He returned five months ago against Dublin in their Croke Park National League encounter but was out-of-form and sluggish. After that game, he stayed behind for extra conditioning work.

When everyone else has left, Michael Murphy is doing extra runs in an empty Croke Park. A bit rusty on his comeback tonight, but that’s the difference! pic.twitter.com/yMIq4wDD5d

Roscommon and Donegal met today in the second round of the All-Ireland quarter-final series. The reward of that work was evident today as the Glenswilly clubman looked in peak condition. Playing as an inside forward at the edge of the square, Murphy finished with nine points in a spectacular performance.

Where would Donegal be without Michael Murphy? A colossus.

Commentating on Michael Murphy is one of the joys of life. Superb

Murphy at full forward a joy to watch!!! #donegalroscommon

In the end, Donegal ran out 0-20 to 0-13 winners. They are set for a huge battle in two weeks as they face Tyrone.

SEE ALSO: Kevin McStay Could Be In Hot Water After Altercation With Linesman During Donegal Game

GAA
2 years ago
By Arthur James O'Dea
Cian Lynch Leads The Way Against 'Grumpy Old Men' Fearful Of Change
GAA
2 years ago
By Maurice Brosnan
Watch: David Clifford Masterclass Lights Up Kerry Championship Thriller
GAA
3 years ago
By Maurice Brosnan
Mayo GAA's Announcement All But Wraps Up Next Manager Selection
Popular on Balls
Football
18 hours ago
By Donny Mahoney
'The Shamrock Is A Brilliant Signifier' - How Ireland's Incredible Centenary Crest Was Made
Snooker
18 hours ago
By Gary Connaughton
Ronnie O'Sullivan Was Not Happy With Crowd Behaviour In Northern Ireland Open Exit
Football
13 hours ago
By Gary Connaughton
Gary Neville & Paul Scholes Have Differing Views On Mo Salah's Liverpool Future
Football
19 hours ago
By Jonathan Byrne
10 Of The Maddest Ever Clauses In Footballer's Contracts