'You've No Right To Win It Now Just Because You're There'

It's difficult to remember a time in Gaelic football when Dublin didn't sweep all opponents aside with mechanical precision.

In the midst of the Dubs' consecutive All-Ireland wins, sheer dominance of Leinster and calls for the county to be split in half/quarters, the relatively recent past seems like light years away.

This year, aside from what could spell an unprecedented six-in-a-row (with the working title of 'Buzzin' for a Half Dozen'), it also marks the Silver Jubilee of the Dubs 1995 All-Ireland victory.

The team that managed to reach the promised land 25 years ago were came close time and again in the early 90s. Losses to Ulster opposition in the finals of '92 and '94, despite four Leinster titles in-a-row, meant an air of trepidation going into the '95 Final against more Ulster opposition, Tyrone.

However, despite their failings in the previous years, Dublin stalwarts Charlie Redmond and John O'Leary were adamant that this would be their time.

Ahead of the All-Ireland SFC final, some of the heroes of the @DubGAAOfficial jubilee team - John O'Leary, Charlie Redmond and Jason Sherlock - relive the rare auld times of that summer in Dublin in 1995. pic.twitter.com/gJiqnYIhEe

"We'd been a team that had been knocking on the door, but the door was never answered," said Redmond. "We were determined that we were going to keep going until that door was opened."

O'Leary recalled a EGM after the '94 Final which crystallised the team's approach going into 1995.

"A couple of us had a meeting after the 1994 All-Ireland Final very quickly and we decided that we weren't leaving this behind, we have to row back for next year, we have to go at it again."

Redmond reckons that Dublin side were buoyed by two things; improved fitness levels and a man named Jason Sherlock.

O'Leary called Sherlock the "ace in the pack" but a young Sherlock was just in awe of his teammates.

"These were my heroes, it was great the fact that they accepted me and they embraced me as part of the team.

"It was like living my dream and it was all I expected it to be."

For O'Leary, the highlight of the year was a 10 point win over Meath in the Leinster Championship, which ensured a fourth Leinster in-a-row.

"That for me is still the most satisfying part of it, with that rivalry we had with Meath."

A win over Cork in the semi-final ensured a date with Tyrone in the main event, with the buildup clouded by fear of failing for a third time in four attempts.

"The fear is 'Can you fail again?' and of course you can and you've no right to win it now because you're there," says O'Leary.

Both Redmond and Sherlock knew the game was going to be attritional, and their predictions came to fruition.

The duo combined, albeit unbeknownst to them, for the only goal of the game. Sherlock's jab towards goal took out the Tyrone goalkeeper before Redmond stabbed it home before the Tyrone defence could clear.

Sherlock didn't know who scored the goal until after the game, with goalscorer Redmond injuring himself in the act.

"I re-injured myself in actually scoring the goal and I wanted to stay on. I was able to contribute but, unfortunately, we all know what happened after that," said Redmond.

Redmond, of course, added literal insult to injury by getting himself sent-off in the second half after an incident with Feargal Logan.

However, Dublin managed to hang on and win their first All-Ireland since 1983, a day when the Dubs had three men sent off and won with 12 on the field.

Pandemonium erupted, with the Hill spilling onto the Croke Park turf in their droves. The drought was over and the capital had won.

On reflection, Redmond remarked that he was the last Dublin player to hold the All-Ireland that day in Croke Park, and it would be another 16 years until a Dublin man would lift the Sam Maguire at HQ again.

It's hard to imagine a drought occurring in Dublin football now, be it 12 or 16 years. One year is long enough between All-Ireland finals for this Dublin side.

Redmond talked about "enjoying your football" as you don't know how good you have it until you retire. It's a premise that certainly could be applied to Dublin supporters right now as their team is in the midst of a golden era never seen in the GAA before.

You don't know what you've got until it's gone, and although it looks like Dublin are a ceaseless machine, they will be stopped one day. 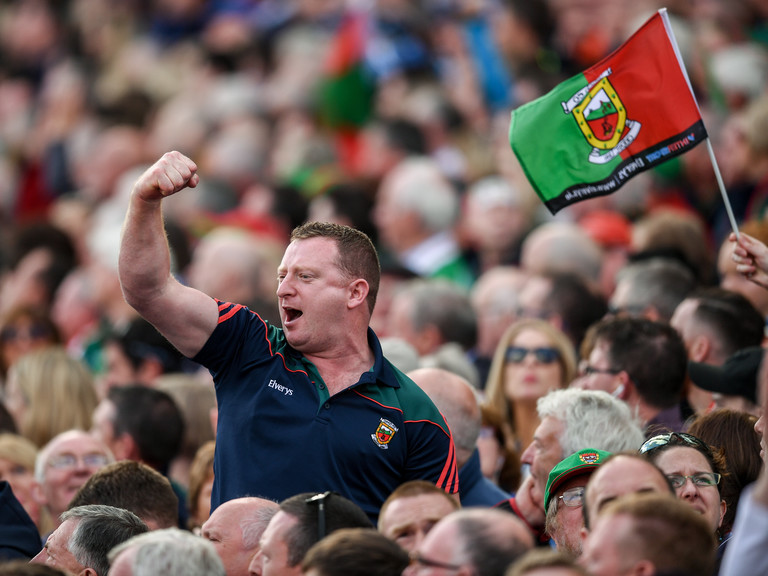 17 September 2017; A Mayo supporter during the GAA Football All-Ireland Senior Championship Final match between Dublin and Mayo at Croke Park in Dublin. Photo by Stephen McCarthy/Sportsfile