One of the greatest sporting dynasties came to a close this weekend as Mayo beat Dublin in the All-Ireland Senior Football Championship semi-final at Croke Park.

James Horan's dogged side came back from the brink at half-time following a strong Dublin display in the first-half to win the game after extra-time.

Robbie Hennelly slotted home that 45 late on to bring the game to an added twenty minutes, before Tommy Conroy and Ryan O'Donoghue caught fire to finish the job for the long-suffering Green and Red of Mayo.

That famous match has received the iconic montage it deserves, with thanks to the good people at RTÉ's Sunday Game.

How was it for you then Mayo fans? The dust has now settled on what has been a very special weekend for the Green and Red. They are heading for the All-Ireland SFC final #RTEgaa pic.twitter.com/kE4XcqCGdD

Whether it was Darragh Maloney's commentary, or Padraig O'Hora's tearful post-match interview, this Sunday Game montage perfectly captures all the emotion of Saturday evening.

"It's over, Mayo have taken Dublin with the biggest scalp of all with a young team."

"Dublin's 45 match run is over, and perhaps with the rivalry that they have had over the years with Mayo, that's just how it should be."

In truth, it arguably is the music that resonates with us the most here, with 'Jealous' by Labrinth being used to full effect.

"It's the greatest day of my life." Padraig O'Hora comments shortly after the game also made the cut.

We're not the only one's impressed by it all.

That is an exemplary piece of production by the RTE production team. Well done.

The big question remains: will we get an All-Ireland victory montage for Mayo on the evening on September 11?

SEE ALSO: In Their Moment Of Need, Dublin's Book Of Dark Arts Was Of Little Use 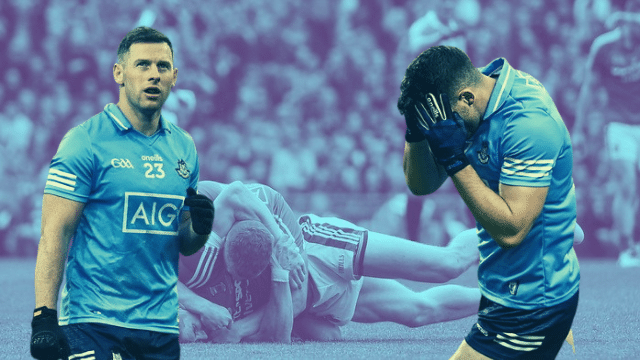