2005 was a year when FIFA was the unloved step-child of football games, as Pro Evolution Soccer, the undisputed king at the time, was riding high on a wave of love that coincided with the release of PES 5, one of the very best sports games ever made, on the back of the magical PES 4.

While the roles have reversed now, and FIFA is well back on top in terms of sales and numbers of active players, FIFA 2005 was met with a sigh and a roll of the eyes by many gamers who had grown tired of gimmicks like 'off the ball control', which actually made that particular game extremely flawed due to how easy it was to split a defence open with the new tool.

However, the one thing that FIFA 2005 had going for it (well, that's harsh, many people still really enjoyed it) was that the Republic of Ireland were bloody incredible.

With Roy Keane returning to the international fold, and with the memories of the 2002 World Cup not too far back in terms of memory, the Irish players were rated very favourably, and most of them had world class potential.

We've gone back for a look at the player database from FIFA 2005 courtesy of FIFAindex.com, and we are absolutely loving how highly rated the Irish players were.

The first figure is the default overall rating, the second is their potential growth in career mode. 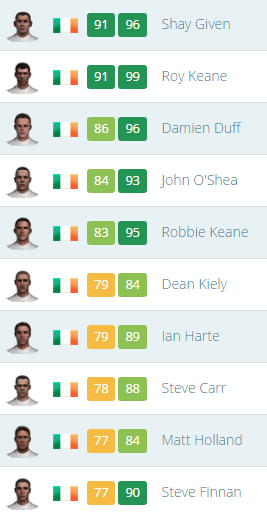 Shay Given was one of the very best goalkeepers in the world, at with 96 potential, EA Sports considered him good enough to be one of the best ever. Also incredible is despite being 33 years old, Roy Keane could grow to a 99 overall.

It's also great to see the likes of John O'Shea, Steve Finnan, Robbie Keane, and Damien Duff being rated high-enough to develop into world class players, there must have been an Irish guy working at EA Sports.

Now onto the starting XI. 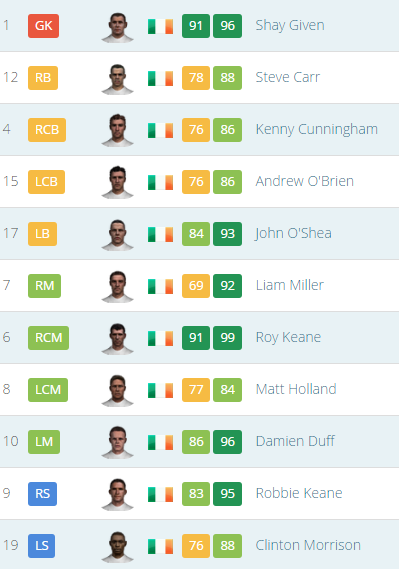 Ireland were the 11th best international team in the game, with an overall rating of 80, but the real talking point here is Liam Miller's potential overall of 92. Incredible. Just incredible.

And now the subs: 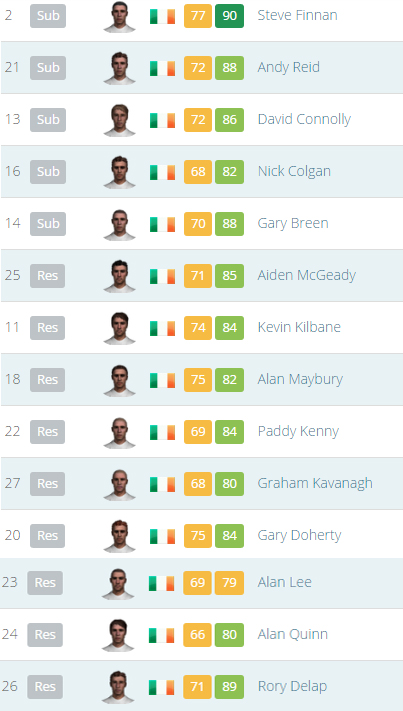 It's just so nice to see such high ratings around Ireland players, considering Matt Doherty's 80 overall makes him the best Irish player in FIFA 20.

I can vividly recall being furious that Robbie Keane was #9 and Duffer was #10 at the time, as there was no option to change it and scoring goals with Robbie then seeing him celebrating with #9 on his back just didn't seem right.

Still, what a time to be an Irish FIFA player, even if the national team would go on to lose to Cyprus while this was still the current football game.

SEE ALSO: Some Of The Irish Player Faces In Pro Evolution Soccer 5 Were Utterly Hilarious

Gaming
1 year ago
By Mark Farrelly
There Are Massive Deals On FIFA 20 And Red Dead Redemption 2 For The PS4 Right Now
Gaming
1 year ago
By Sean Meehan
Nicky Byrne And A Host Of Celebrities To Take Part In eSoccer Aid On Fifa 20
Gaming
1 year ago
By Sean Power
New FIFA 20 Update Allows You To Use Icon Players In Career And Kick Off Mode
Popular on Balls
Rugby
2 days ago
By Colman Stanley
Keith Earls Shares Story That Captures Andy Farrell's Decency
Football
2 days ago
By Eoin Harrington
Quiz: Name Every Player To Score In A Champions League Final
Football
1 day ago
By PJ Browne
'If He Continues With Performances And Goals Like That, Stephen Kenny Will See It'
Football
14 hours ago
By Gary Connaughton
Portsmouth Likely To Retain Gavin Bazunu This Month Despite Championship Interest